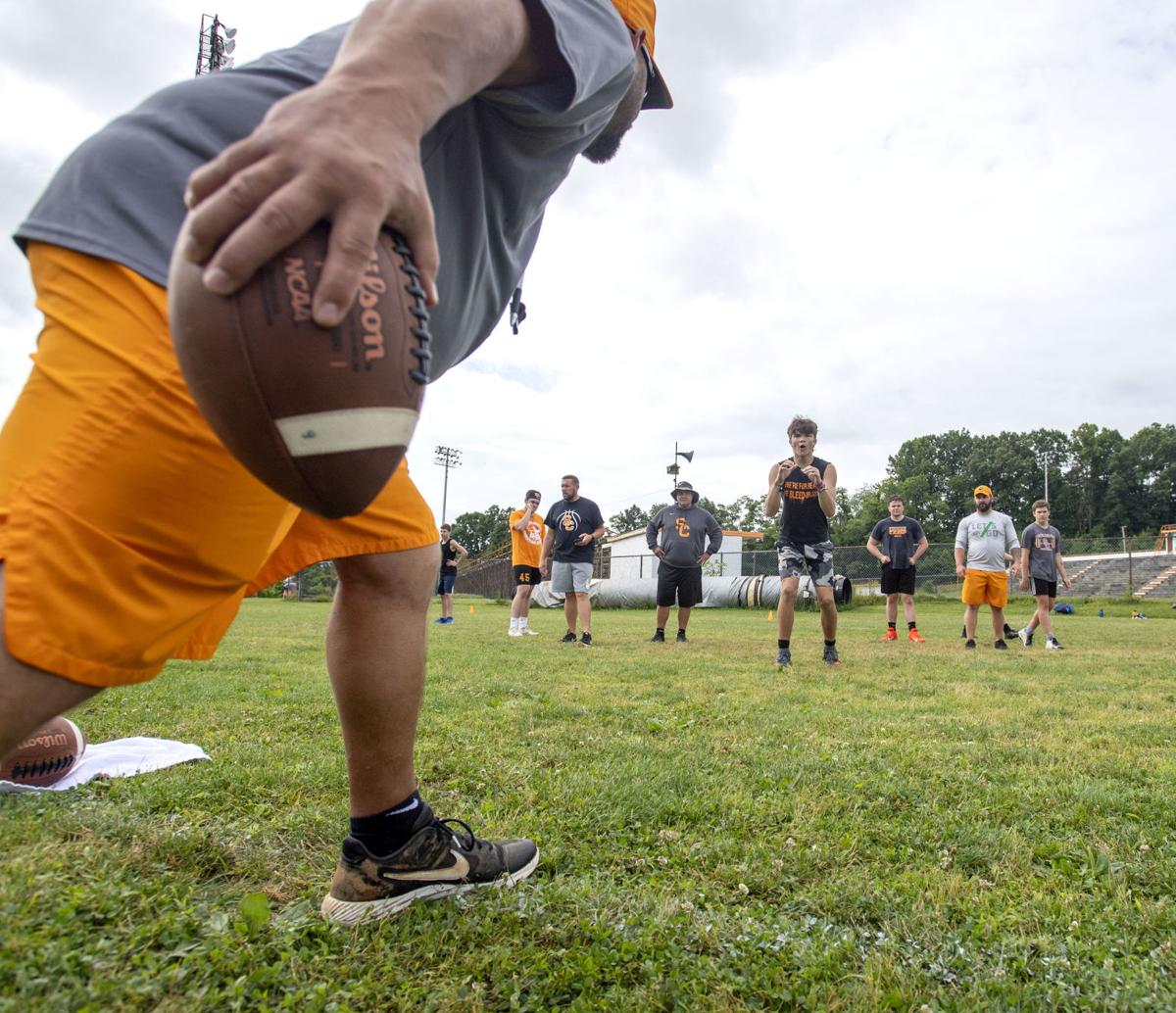 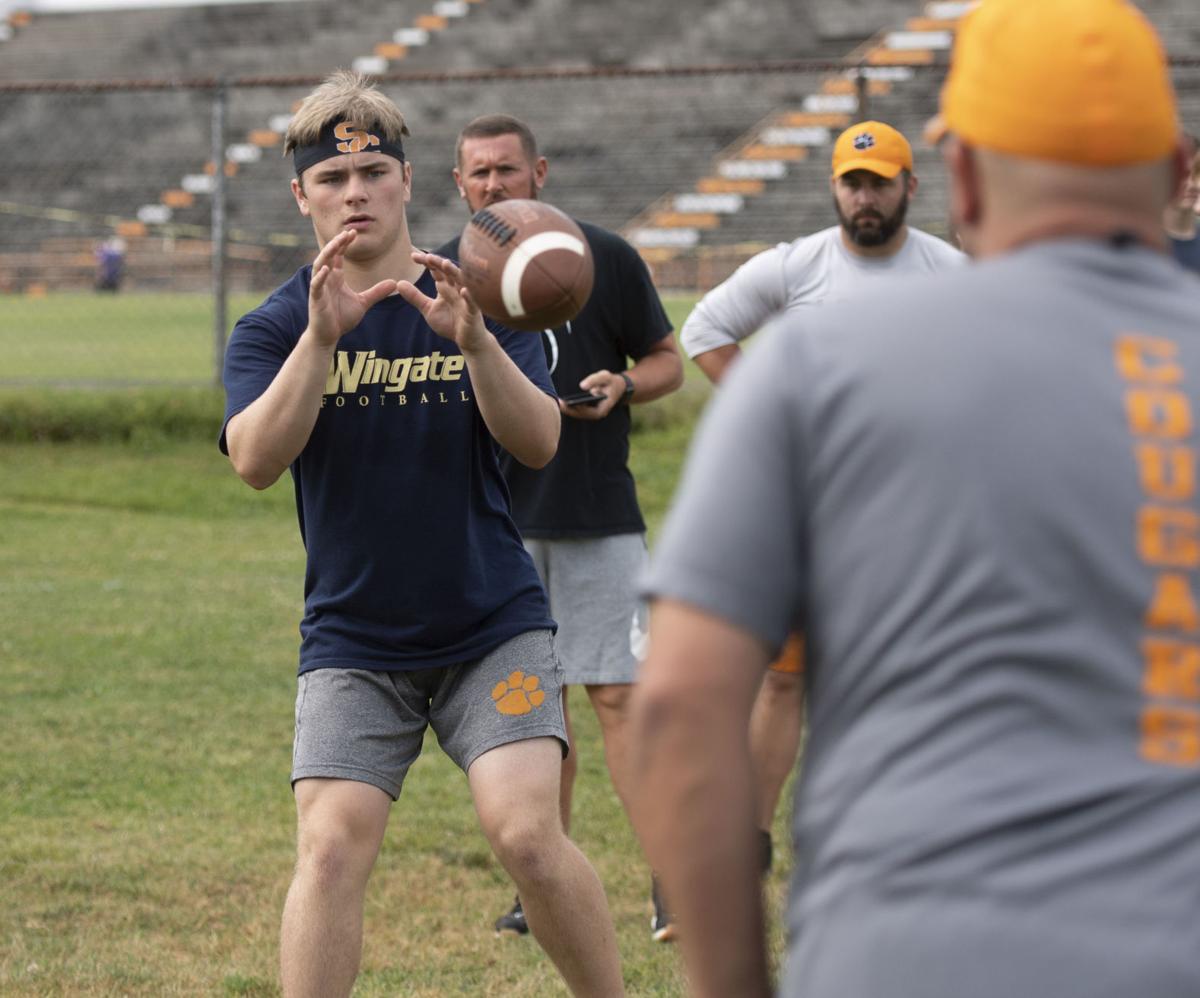 Sullivan Central quarterback Will Nottingham takes a snap during practice on Friday. 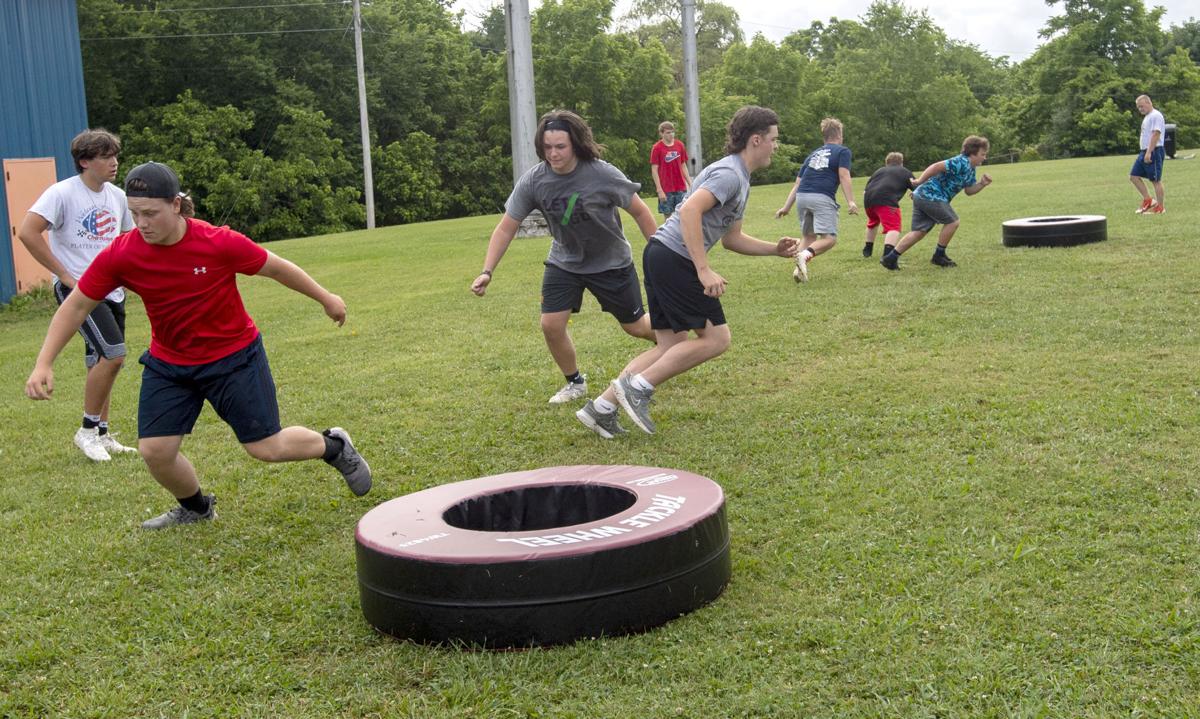 Members of the Sullivan Central offensive line work on during practice on Friday. 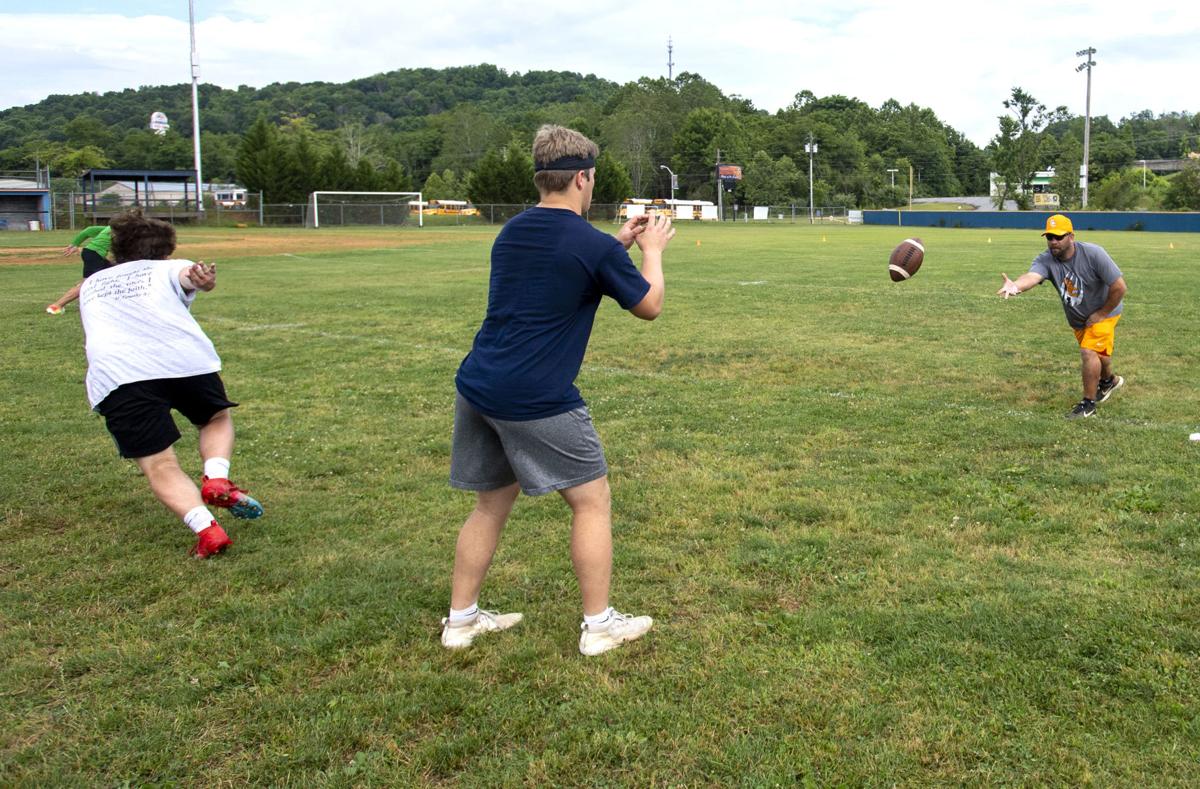 Sullivan Central quarterback Will Nottingham takes a snap during practice on Friday.

Members of the Sullivan Central offensive line work on during practice on Friday.

It has been a long dry spell for Sullivan Central football, which hasn’t had a winning season since 2003.

Yet, Chris Steger has high hopes for what lies ahead in 2020.

“I am really excited about this team,” said Steger, entering his fifth season as head coach of the Cougars. “These guys have really put the time in and they have put out a lot of effort. They have played a lot of football.

Now if they can just get on the field in the fall, unlike the spring sports season that was wiped out by the coronavirus.

“The sports that have already lost their seasons, you are hurt for them,” Steger said. “This is a really special group that I have got. I hope they get afforded the opportunity to play, especially these guys coming up on their senior year. That is a big year for everybody.”

For the last three weeks, football has been back in Blountville, with Sullivan Central students finally able to return to school on June 1 to begin workouts for the upcoming season, having been gone since mid-March due to the COVID-19 pandemic.

“The one thing I felt like was most important was just the kids getting back together and having that team atmosphere,” said Steger, who had conducted team meetings through online options. “You had some interaction and that is always good, but the kids actually being together, working out together and spending some time together, that is a big part of this.

“The big thing is getting back into that football shape and being out in the sun a little bit and working out. Those are the things we can do right now and that is what we can control.”

The Cougars have met five mornings a week over the last three weeks in two shifts, with more than 40 players divided into small groups, with coaches focused on conditioning and teaching.

“We had the nine in a group and we kind of stationed it off where the kids had some conditioning, some agilities,” he said. “We did not go in the weight room. We did some body weight and we did some plate work. We felt with being outside it would be a little easier to clean. We felt like that was a more effective usage of our time.”

There was plenty of cleaning taking place, with the coaching staff and trainer focused on sanitizing hands, footballs and equipment to following the proper guidelines such as temperature checks, social distancing and so much more.

“After the [first] group would leave the new group would come in and we would resanitize hands and our trainer did a real good job. She had our bleach solution mixed up so we were able to clean the equipment, clean the balls just like we would have cleaned everything else,” Steger said. “That way there was no cross-contamination there and we were able to throw a [football] a little bit in those small groups.”

Football has been a struggle in Blountville for years, but Steger is excited about this particular squad, which has more than a dozen seniors, led by record-setting senior quarterback Will Nottingham.

“Will has already set a couple of school records for passing in a season. He has actually got a couple of things he is individually aspiring to and as a team leader he will be a two-year captain,” Steger said. “He throws as good a ball as anybody in East Tennessee. He is very accurate, a very strong arm, great mechanics. We have got several receivers that I am really high on.”

Those receivers include Connor Wilson, Preston Staubus and Peyton Greene, while Nick Harrison will run the ball behind a much-improved and stronger offensive line.

“It is a really strong group of seniors and a really strong football team. We feel like this team is built for a lot of success and has been built the right way,” he said. “The coaches have put in a lot of time and energy into developing these kids and we want to give them the opportunity to get out there and develop and show how much they have improved over four years.”

It’s in the trenches where Steger is most confident, having seen much growth in such returnees as Jacob Wise, Zack Strouth, Benji Novak and Grant Cornett.

“The thing that makes me really excited for all those guys is this is going to be the biggest offensive line I have ever had since I have been at Central,” said Steger, who had been pleased with the offseason work in the weight room prior to the school closure, calling strength and conditioning the fourth phase of football, right there with offense, defense and special teams. “We feel like we are going to be way better up front, just from that standpoint to being able to handle that point of attack size-wise.”

What remains to be seen is whether Sullivan Central will be able to open its season as scheduled on Aug. 21 at Sullivan North.

Steger can only speculate about what may await in the fall.

“I don’t think those matters have been decided. Obviously there is a lot going on in the world,” said Steger, who has contingency plans for the numerous scenarios that could await. “You want to do things the right way. We feel like these last few weeks we have done things the right way.

“We have been safe, we have put precautions out there for the kids. We are trying to do all those things, but there are still a lot of unknowns out there for everybody.”

Sullivan Central will now join the remainder of the Tennessee Secondary Schools Athletic Association with a two-week dead period beginning on Sunday and continuing through July 5.

Steger is hopeful that by then some of the limitations might be eased to allow more to be done on the football field. That is, of course, another unknown.

“They will let us know if that comes down and we will make adjustments to our schedule and make sure we are doing things the right way,” said Steger, who plans to spend the next two weeks with his wife and son before getting back into the grind that football season can be. “We will just continue to push forward and hope they can figure out a way to be able to do this in the fall.”