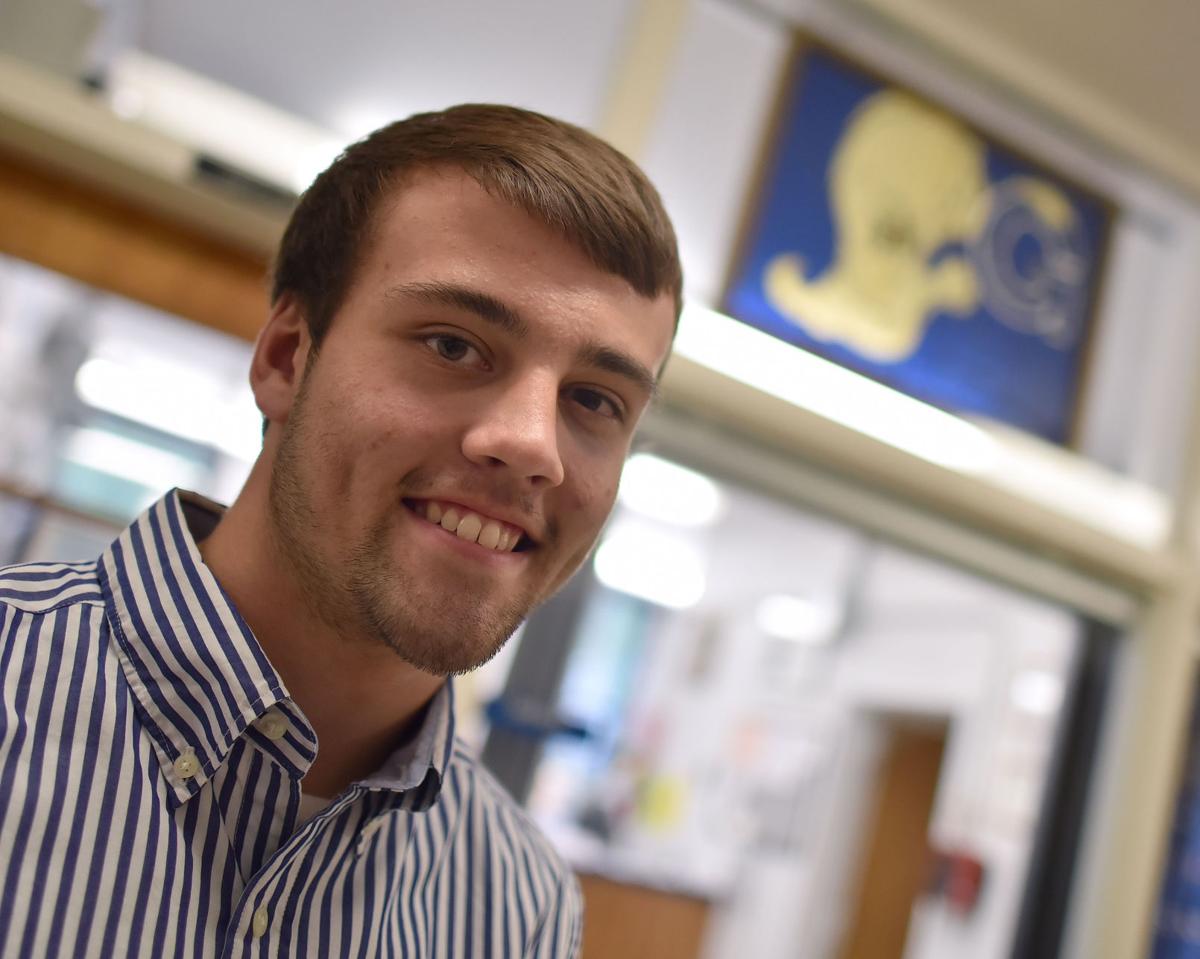 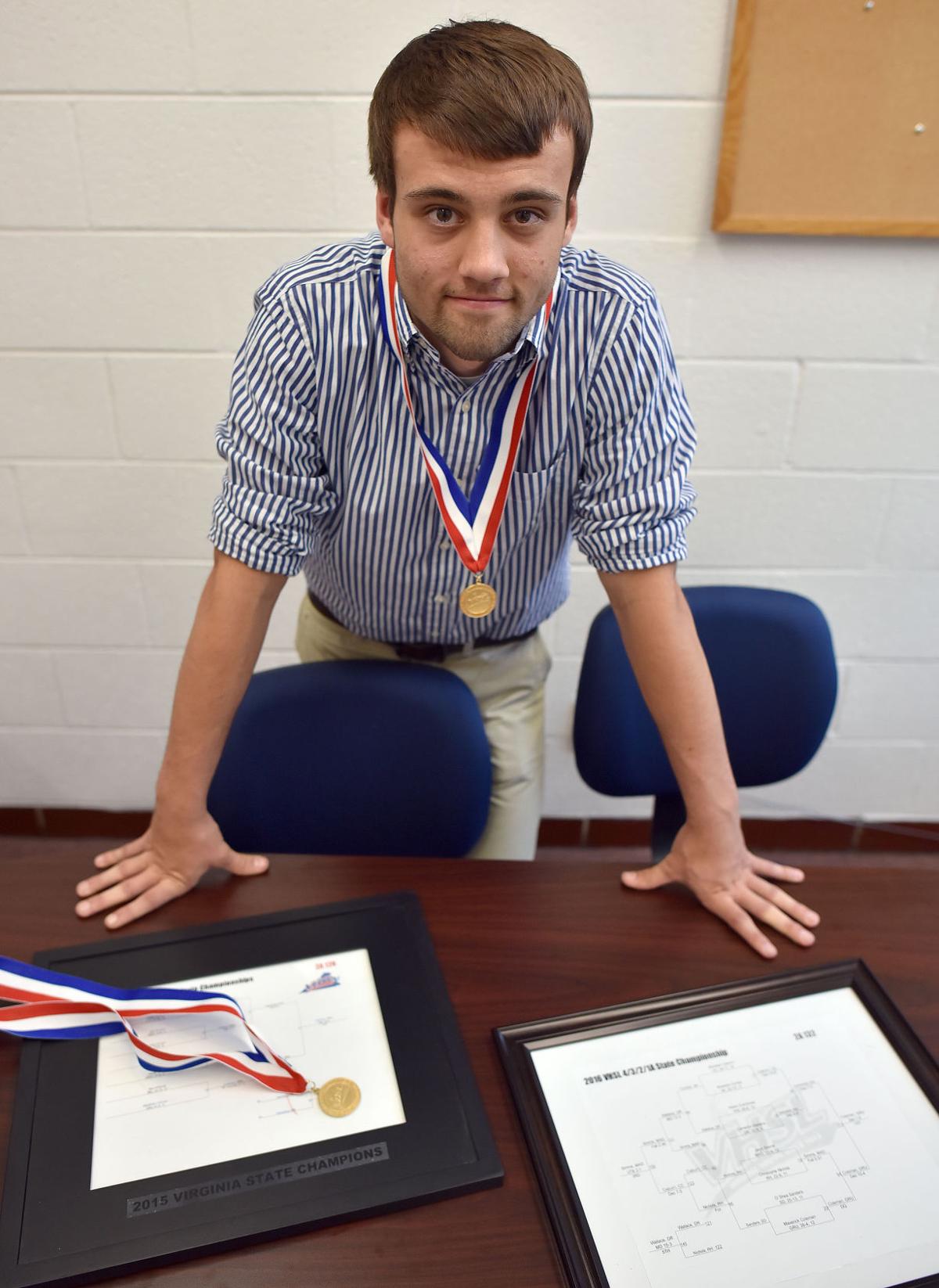 Grundy High School's Maverick Coleman made a point to make his school work a priority. 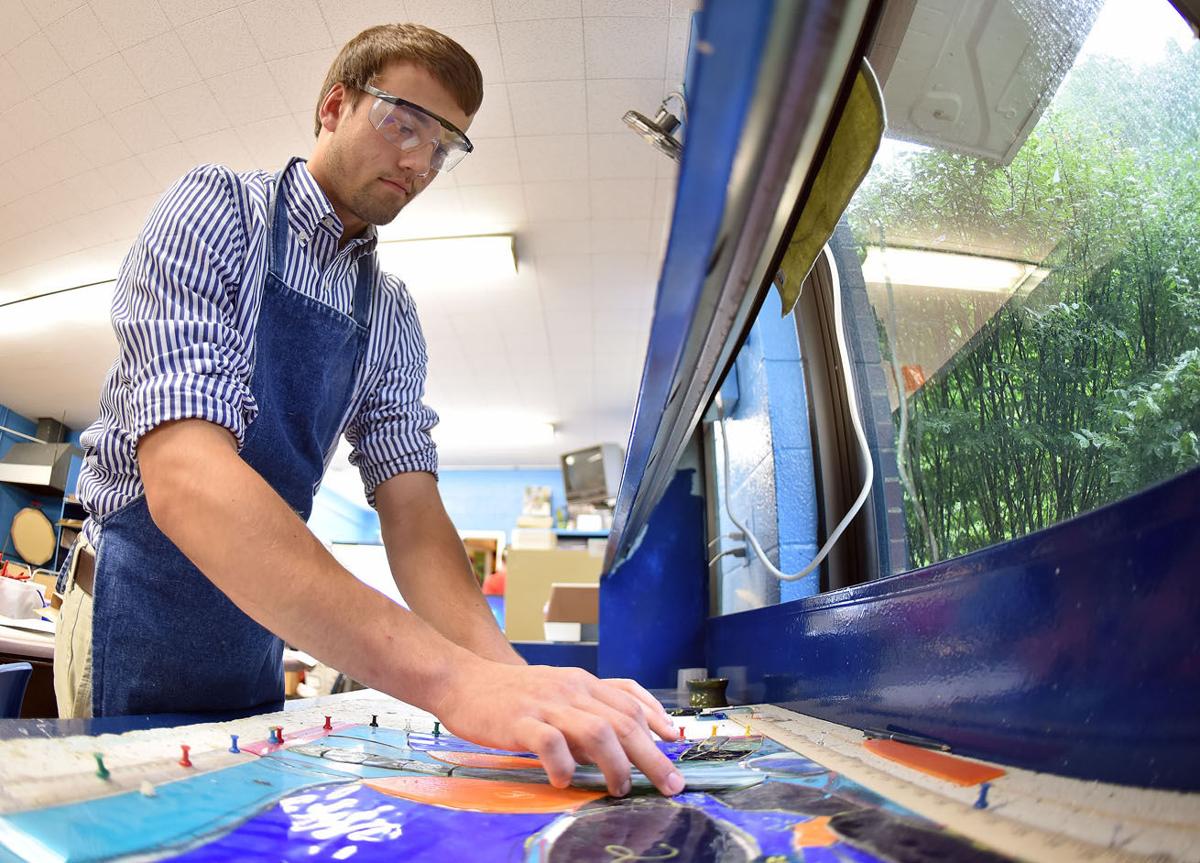 Grundy High School's Maverick Coleman worked on a stain glass project of the Golden Wave which hangs in the school office.

Grundy High School's Maverick Coleman made a point to make his school work a priority.

Grundy High School's Maverick Coleman worked on a stain glass project of the Golden Wave which hangs in the school office.

GRUNDY, Va. – Maverick Coleman is a proud son of the Appalachian coalfields.

According to his coaches and friends, the Grundy High School senior is also tougher than a coal truck.

In honor of his unique mix of athletic grit, intellectual curiosity and compassion, Coleman earned the 2016 Gene “Pappy” Thompson Award for Excellence.

A life-size marble statue of a coal miner stands in front of the Buchanan County courthouse in downtown Grundy.

Coleman knows the history of the coal barons and booms of the Grundy area in the 1970s and early 1980s. He also knows the risky nature of the quest for black gold.

“I have lots of roots in the mines, and it’s really what made my family,” Coleman said. “My father, grandpa and step-grandpa were all underground coal miners. My grandpa [Jerry VanDyke], was actually killed in a coal mine when a rock fell on him.

“They all worked hard for a living, and I knew that I was going to have to work hard for everything I got.”

Coleman found his niche in an isolated facility located off Grappler Road in the community of Vansant. Welcome to the Grundy Wrestling Club gym.

“There’s no cell phone service or anything up there, it’s just us on a mountain and we’re all on a mission,” Coleman said.

That search-and-destroy mission has resulted in a record 19 Virginia High School League state team wrestling titles and many heroic figures for the Golden Wave.

“There was no question that I was going to wrestle,” Coleman said. “I started in the sport at age two and fell in love with it. I never wanted to do anything else.”

Coleman said he attended every home match for the Golden Wave as a youth. A favorite wrestler was his cousin – two-time state individual champion Sean VanDyke.

“I admired just how dominant Sean was and I set a goal to be that good someday,” Coleman said.

If Coleman needed any extra motivation, he found a big dose on his first visit to the sprawling Grundy Wrestling Club.

“I was in middle school when I first walked in there,” he said. “Just seeing the intensity of the high school wrestlers … I was like ‘dang, those guys are really working hard.’

“I mean it’s just a madhouse in there, with a lot of blood, sweat and tears. That’s what made Grundy wrestling so good – the hard work.”

Overcoming considerable pain, Coleman carved out his legacy in the form of a 179-11 record along with a pair of 2A state individual wrestling titles, one runner-up finish and a state semifinals appearance as a freshman.

“I can still remember the details of every match I lost,” Coleman said. “I didn’t wrestle my best in the state finals of my sophomore year and ended up losing 5-3 to a guy from Nottoway. That burnt me up.”

Less than 24 hours later on a Sunday morning, Coleman took out his frustration at his sanctuary – the Grundy Wrestling Club.

“I was in there about all day – running, lifting and wrestling,” Coleman said. “I didn’t want to talk to anybody and the only person I wanted to see was Coach Fiser. He knew what to say. It was one intense session.”

That sort of determination and courage helped Coleman endure one of the scariest moments of his young life this winter.

In the week before the Region 2A West regional meet, Coleman was practicing against a teammate when he suffered an injury to his left ankle.

“I crawled off the mat and I was hopping on one leg when my ankle popped like a shot gun,” Coleman said. “I thought for sure it was broken.”

As Grundy wrestling assistant and trainer Robert Hibbitts applied ice to his ankle, Coleman entered a twilight zone of what-ifs.

“The thought of not being able to wrestle in the state tournament was the first thing that hit me,” he said. “I started to tear-up, thinking that my wrestling career was over.”

“I took it easy for the next few weeks,” Coleman said. “I couldn’t run on my ankle, so I focused on biking and cardio training.”

Then came the state final showdown at 132 pounds against Kevin Overstreet of King William before a capacity crowd at the Salem Civic Center. Overstreet watched Coleman’s earlier matches, so he was aware of the injury.

“I kind of favored my right leg so he couldn’t shoot on my left side,” Coleman said. “Oh yes it was painful, especially when we had to go down to the mat and he would grab on to my ankle. I knew that I had to get through the last match somehow, and I did.”

Coleman found his niche in the history-rich program that has featured the likes of Scott Justus, a former state champion who wrestled at Virginia Tech and serves with the Navy SEALs.

“Maverick is definitely one of the top wrestlers I’ve ever coached,” Fiser said. “He’s a very good competitor with a great work ethic. Maverick has always wanted to be a high achiever.”

In a town where every wrestling match is carried on Grundy radio station WMJD, Golden Wave wrestlers can quickly achieve folk hero status.

Coleman became a celebrity the old fashioned way. He packed his lunchbox and labored every day.

“Grundy wrestling is something good that comes out of these mountains other than coal,” Fiser said. “A lot of people have helped Maverick along the way. It’s definitely been a community effort from his coaches, teachers, friends and mom.

“The more Maverick grew and the better he got, Maverick took on the responsibility of being a better leader. As a coach, you want to see a well-rounded kid and Maverick is the total package. He has good grades, he can wrestle and he contributes to his community.”

Grundy head football coach and science teacher Jeremy Ward agreed that Coleman fills all the requirement of a model student-athlete.

“You never see Maverick bragging,” said Ward, who played football at VMI. “He just does what he needs to do. Maverick was always prompt and studious in the classroom and he did a wonderful job as our team leader in football.

“Maverick plans to come back to Buchanan County after college and make a difference. That’s a great example.”

Coleman has given back to his neighbors in various ways. He directs canned food drives, shares the meat of animals he harvests during his hunting adventures, and assists law enforcement personnel in finding individuals with cognitive disorders in remote areas.

His next step is a six-year grind at Radford University that will conclude with three years of physical therapy school.

“Coal really made this county and things boomed for a while before dying off,” Coleman said. “Now with the decline in the coalfield economy, we really don’t know how much longer coal is going to be around so it all depends on what comes next for our county.”

Coleman faced the decision that many kids in far Southwest Virginia struggle with. Stray from the mountains in hopes of finding a high-paying job and excitement or stay at home and give back.

“It’s a different world outside Grundy. Some of my friends are planning to move and some aren’t,” said Coleman, who attracted interest from several colleges for his wrestling skills. “Really, the main thing that will keep me here is medical care because it’s needed everywhere.

“I’m pretty confident I can come back to Grundy, get my physical therapy business started and provide for my hometown. I know my grades would take me farther than my wrestling.”

For Coleman, the best piece of his long-range comeback plan would involve venturing back inside the Grundy Wrestling Club to attend to the health needs of young athletes.

“Now that would really be a dream,” he said.

Elizabeth Lindsay, Coleman’s cousin and a former star student-athlete at Grundy, was the 2006 winner of the Gene “Thompson” Award. Lindsay now works as a pharmacist.