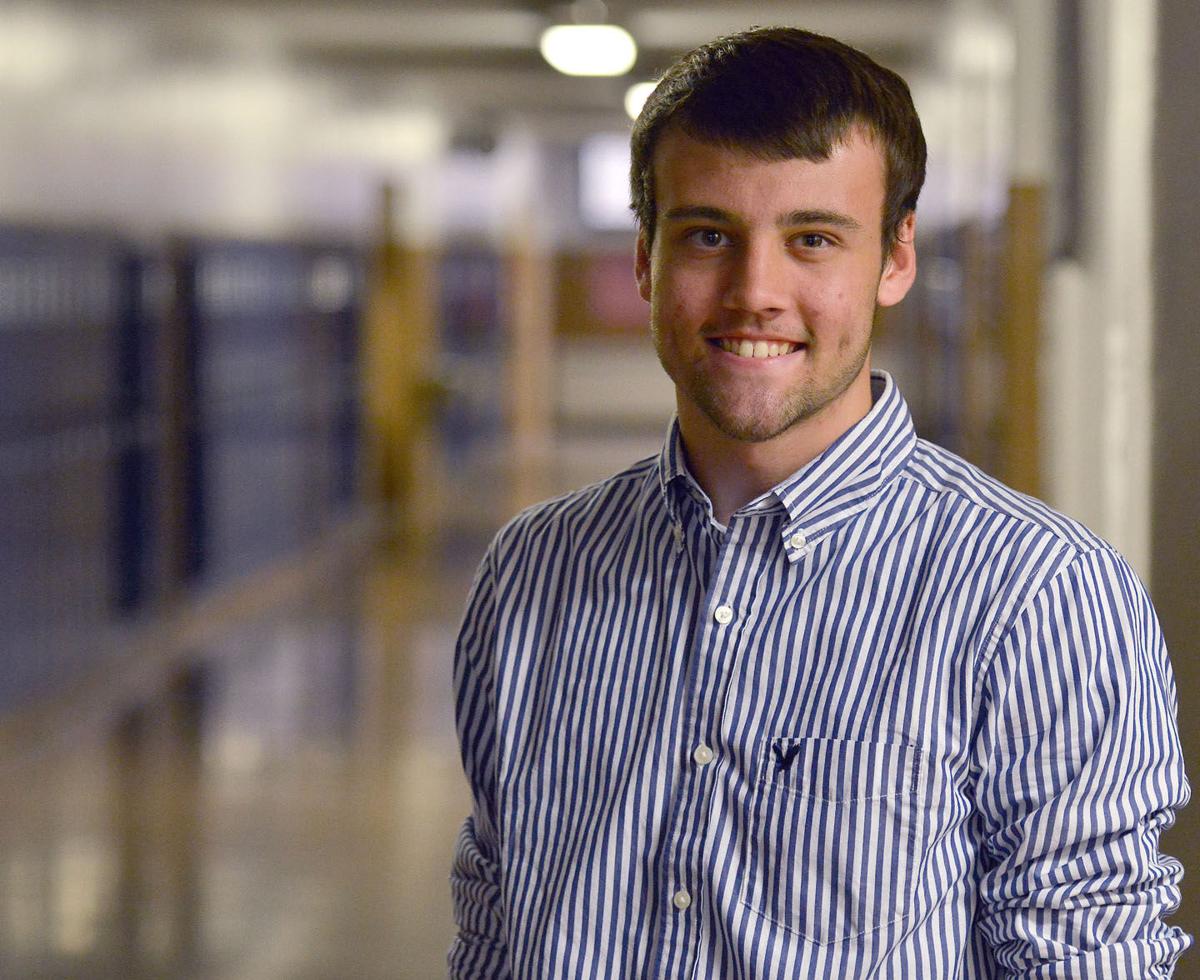 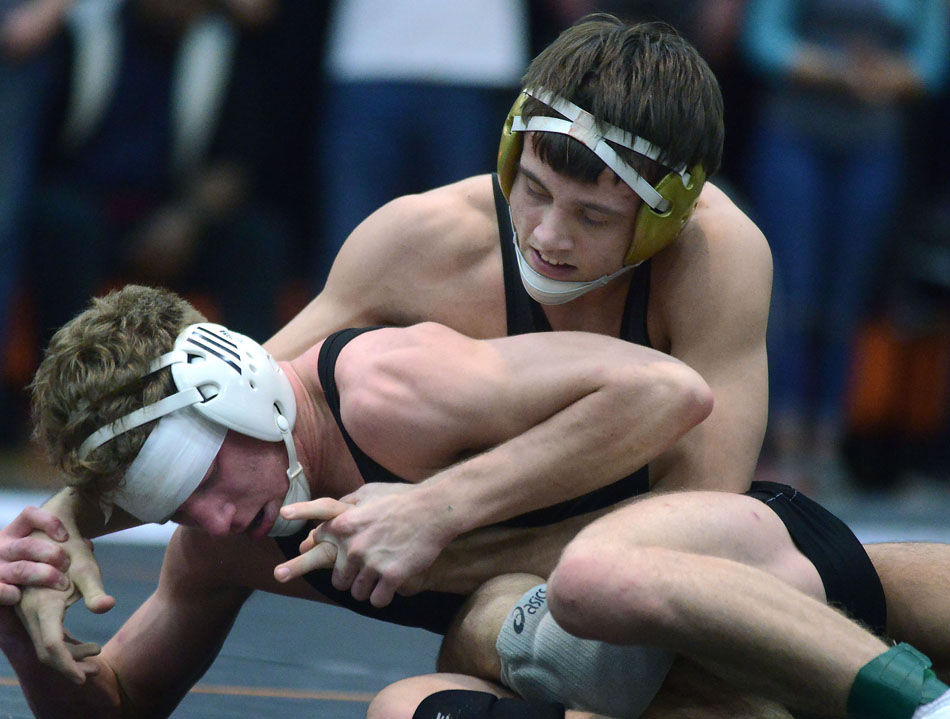 With his mother providing constant motivation, Coleman worked overtime to become a role model in athletics and academics at Grundy High School.

Overcoming a variety of injuries, Coleman won two individual and three team state wrestling titles for the Golden Wave while earning a grade point average of 4.0.

And that’s only part of the story.

A voracious learner, Coleman contributed a lasting legacy to current and future Grundy students by crafting a stained glass piece of the Golden Wave mascot that hangs in the school office.

Allison Street, who has taught art for 19 years at Grundy, said she marvels over the versatility of her star student.

“Maverick has many talents to go along with his willingness to learn and dedication,” Street said. “His piece of art will serve as a time capsule, preserving the Golden Wave legacy.”

“I took an art class and just gained an interest in stained glass projects,” Coleman said. “It took me pretty much a whole year of 90 minute classes to get the “Wave Man” all together.”

That sort of persistence carried over into wrestling, where Coleman endured three broken fingers, a strained hamstring, a broken bone in his wrist and four concussions to record an overall record of 179-11.

Although he never mentioned it, Coleman wrestled most of his senior season with torn ligaments in his ankle.

Coleman said his 7-0 victory over King William’s Kevin Overstreet in the 2A state finals was both a personal and town-wide achievement.

“Oh gosh, you get chills walking out of that tunnel at the Salem Civic Center for a state finals match and hearing those Grundy fans go wild,” Coleman said. “There’s nothing like that.”

Before their climactic showdown in the 132-pound weight class, Overstreet and Coleman paced around the mat while waiting for their match to begin.

“He was trying to psyche me out and I was just trying to stay focused,” Coleman said. “I let my wrestling do the talking.”

Coleman said his conquest in Salem will be forever preserved in his memory bank.

“That match was my last chance to ever wrestle in a Grundy singlet, and I wanted to make the most of it,” Coleman said. “It’s really an honor to get Grundy’s name out there and to represent our town well.”

Over the past four years, Coleman’s name has because synonymous with Golden Wave athletics. He juggled five sports, serving as team captain in wrestling, soccer and football.

According to two-time state champion wrestler Andy Webb, Coleman paved the way for Grundy to set a Virginia High School League record for all divisions with 19 state wrestling championships.

“Maverick is a great leader who always takes a positive attitude,” said Webb, the son of two-time Grundy state wrestling champion Raymond Webb. “During the week of the state tournament, Maverick offered words of wisdom to everybody on the team and he did the same thing before our state matches.”

Wrestling has long been the second-biggest business behind coal mining in Buchanan County.

The rigorous business routine for Grundy wrestlers during the regular season begins with a 7 a.m. morning run three times a week, followed by practice sessions after school and after dinner.

“I usually do my homework between the after school practices or from 10 to 10:30 at night,” Coleman said. “I’ve put a lot of hours into wrestling and traveled around the country for tournaments and camps, and I wouldn’t trade the experience for anything.”

“I feel strongly about coaching young league athletes,” Coleman said. “I want to provide them with the positive role model that I lacked.”

The mentor for Coleman has been Grundy head wrestling Coach Travis Fiser, a two-time All-American wrestler at the University of Iowa who has guided the Golden Wave to eight state titles.

“Growing up in a single-parent family, Coach Fiser has been like a father figure and best friend,” Coleman said. “He’s pushed me to do the best I could, and I have the utmost respect for him.”

As for his relentless work ethic, Coleman points to his mother. Teresa Coleman works in human resources at Grundy’s Buchanan General Hospital while also handling the payroll duties for another local business.

“Really, I credit all of my success to my mom,” Coleman said. “She works long hours and is always on me about the importance of a strong work ethic and the principles of life. I guess that I got my work ethic from mom. “

Coleman said his grandmother, Angie Wyatt, also taught him a valuable lesson about the need of giving back to his community.

“My grandma is 72 and battles with arthritis,” Coleman said. “She helps at the local soup kitchen every week and I started to go with her and help with the lifting. I was disturbed to see just how many people in this area needed assistance.”

A short time later, Coleman formed a plan and took over the canned food drive at Victory Baptist Church in Grundy.

“I thought of the faces I had seen at the soup kitchen and my desire to assist was stronger than ever,” Coleman said.

Coleman even turned the food drive into a competition for classes. At last count, Coleman and his Grundy classmates had raised 750 cans.

“Maverick is a one-of-a-kind student,” said Elizabeth Bevins, an English teacher at Grundy and adjunct professor at Southwest Virginia Community College. “If he’s involved in any project, our students want to be involved.

“I think Maverick is part of the generation that will help bring our local economy back to what it once was and inspire others to do the same thing.”

Coleman admitted that it’s painful to see the many vacant businesses across Buchanan County. Naturally, he has mapped out a long-range plan to become a pied-piper for economic renewal.

Even though he has a couple offers to wrestle in college, Coleman plans to attend Radford University, pursue a degree in biology and then return to the coalfields to work as a physical therapist.

“I know the struggle of being injured and the pain and rehab process that goes with it, and I want to be able to help people like I’ve been helped,” he said.

For Coleman, there is no better place to work than right at home.

“I hate to see the coal industry going downhill and the economy decline,” Coleman said. “I want to help in the best way I can and be part of the process of bringing more businesses back to this area.

“I love it here and you can’t beat the people. Wrestling brings a lot of pride to our town, and I was honored to be a part of the program.”

Grundy principal Leslie K. Horne said she admires Coleman for many reasons, including the way he has handled his success on the mat.

“Maverick is a role model in all aspects of life, and he’s the epitome of humility,” Horne said. “Members of this community have bonded with our wrestling program since it was created and supported by the Robertson and Skeens family, and Maverick is one of the many success stories.”

Horne said the documentary “Wrestle Out,” which focused on the Grundy wrestling program, is fitting for Coleman.

“We have provided the opportunity for wrestlers to attend college, decide what they want to do in life and then maybe come back to the area,” Horne said. “We need to keep our young people here, and hopefully Maverick can motivate others to return and help the community.”