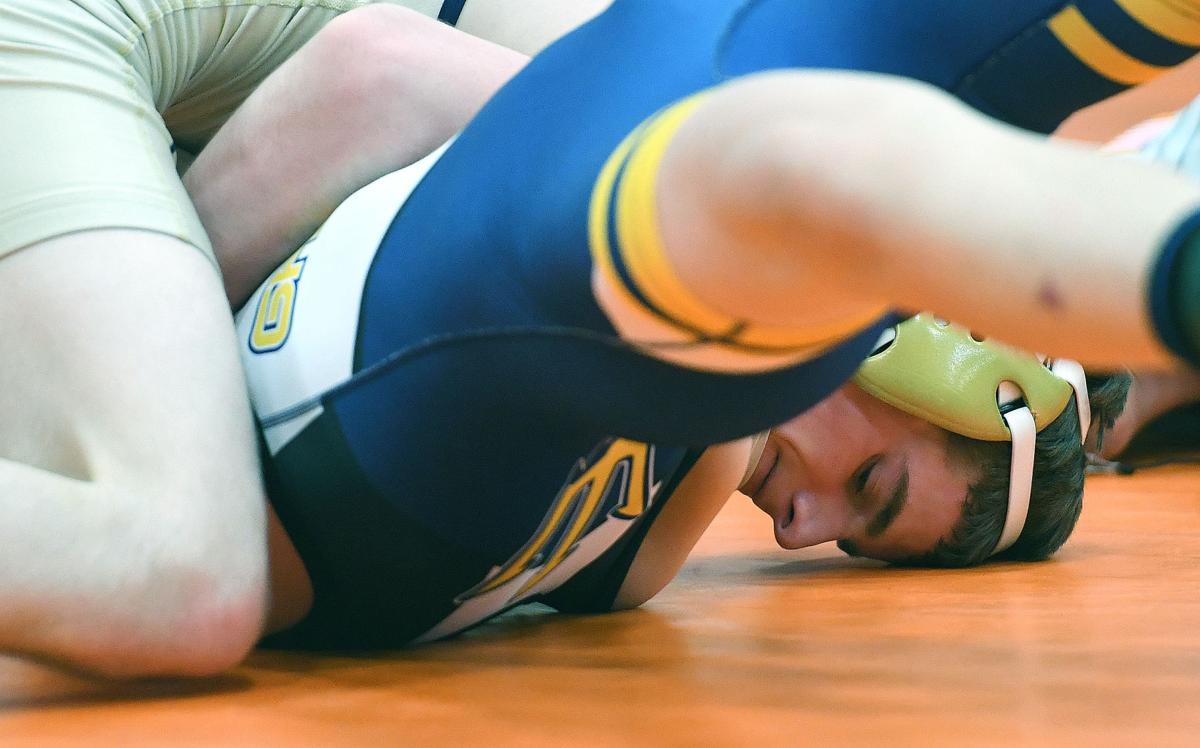 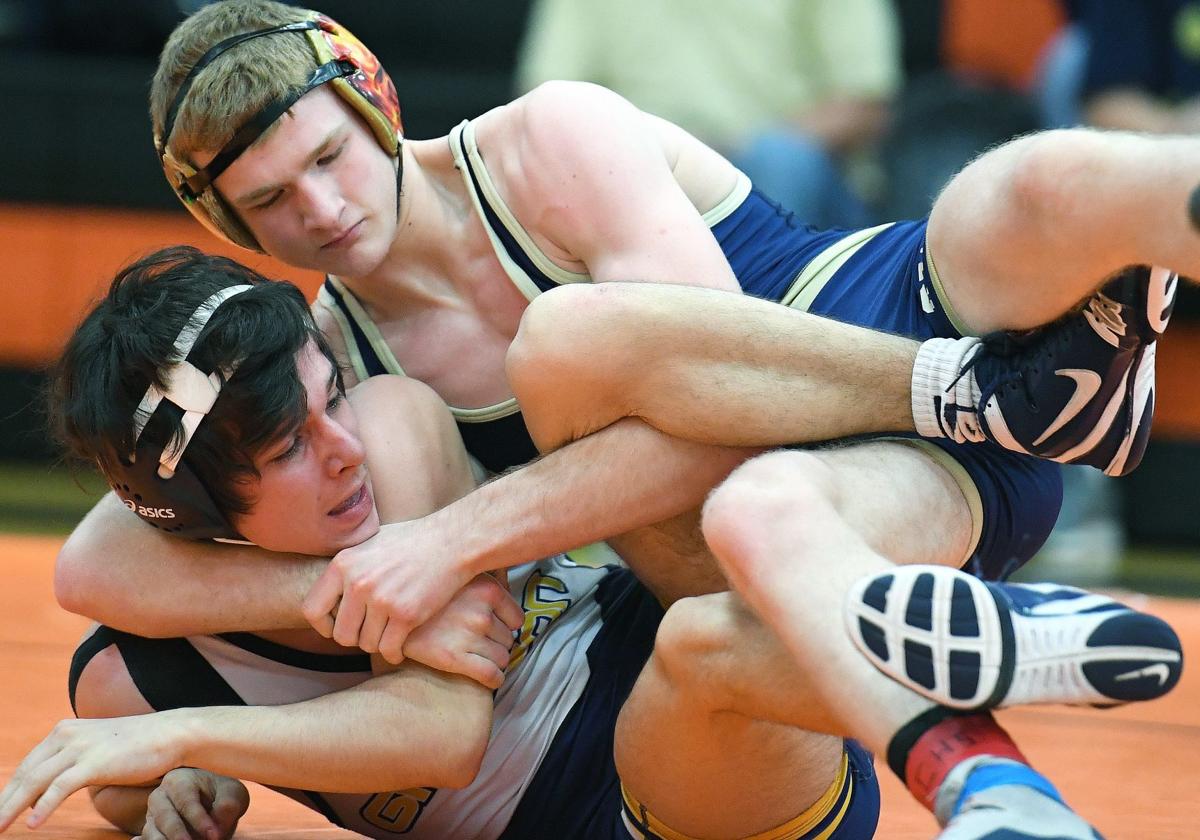 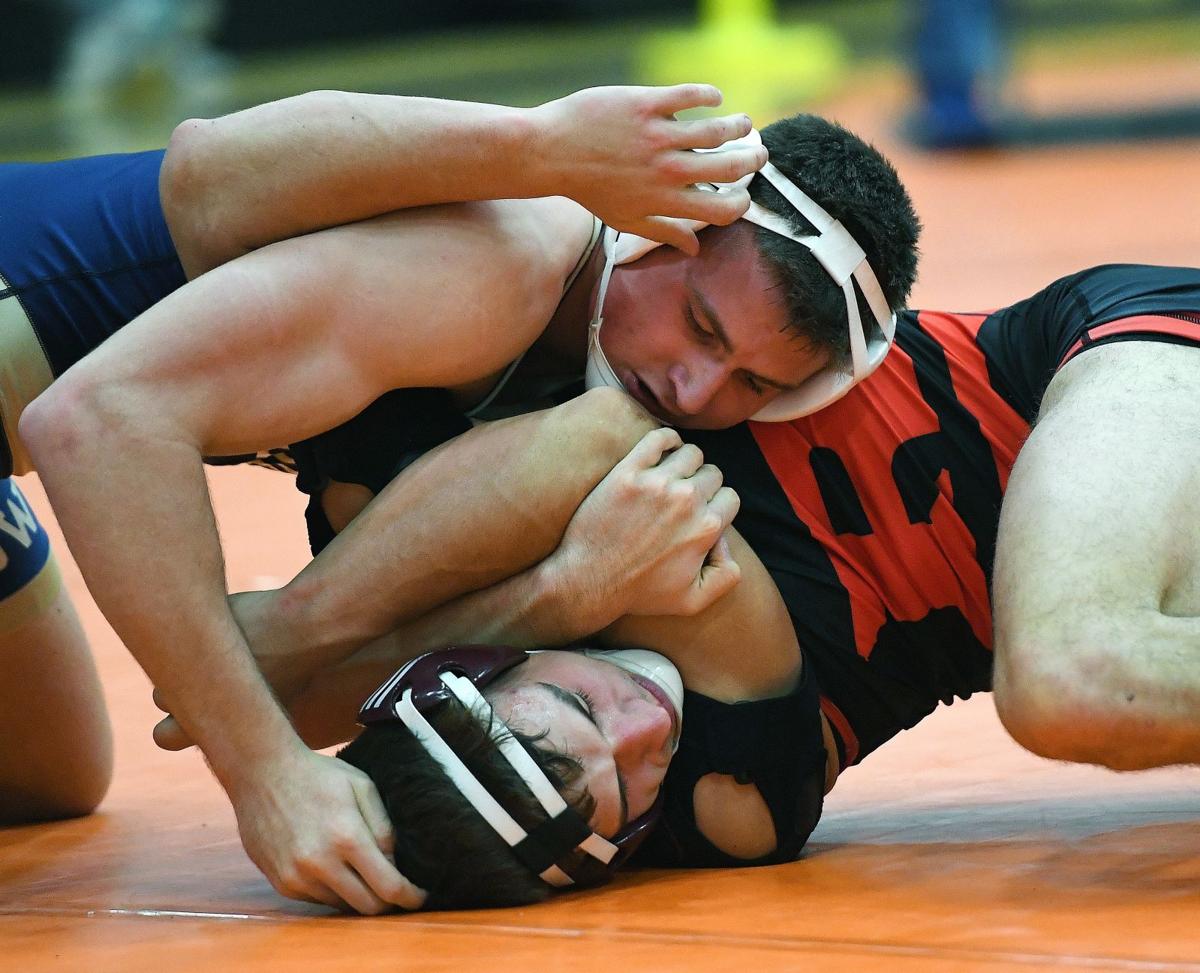 Grundy's Peyton McComas turns Trevor Roberts of Riverheads to his back.

Grundy's Peyton McComas turns Trevor Roberts of Riverheads to his back.

The VHSL doesn’t reward state duals titles in wrestling, so Wednesday’s match was a de facto Class 1 state championship event and it definitely lived up to the hype.

“If you were here tonight and are a wrestling fan, you got your money’s worth and then some,” Fiser said. “I thought it was an epic night.”

Grundy – which has won 22 VHSL team titles since 1978, including the last four – needed some late-match heroics to record wins over both Riverheads and Rural Retreat.

Grundy trailed the Gladiators by a 30-13 count with five matches remaining, but won each of those bouts as Peyton McComas (182-pound weight class), Hunter Scarberry (195), Tanner Bishop (220), Logan Looney (285) and Ethan Blankenship (106) prevailed to seal the deal.

The Golden Wave faced a dire scenario against Rural Retreat too, falling behind 34-13 with just four matches remaining. Grundy proceeded to win the next four clashes by pinfall as Bishop, Looney, Blankenship and 113-pounder Kaleb Horn stuck their opponents’ shoulders to the mat.

With Grundy trailing 34-31, Horn dispatched Rural Retreat’s Blake Battaglia in the first period to clinch an unbeaten night for the Golden Wave.

“I was pumped up ready to go and kind of mad about earlier,” Horn said.

He was referring to dropping a 4-0 decision to Jude Robson of Riverheads, but he put that behind him and took care of business in the night’s final match.

“He certainly did,” Fiser said. “He stepped it up, shook it off and that’s what you want to see from your guys – how they bounce back and he bounced back really well.”

It appeared that Grundy might simply get bounced after Rural Retreat took that lead.

Eli Fortuner of the Indians posted a hard-fought 7-4 decision over Scarberry at 195 pounds in a match featuring two wrestlers with a mullet hairstyle and unbridled intensity.

“I’m liking that match at 195,” he said. “Those guys were getting after it. I’ll tell you what, Hunter Scarberry is going to be determined to work pretty hard. They’ll see each other come regions and we’ll get ready for round two.”

A sophomore, Fortuner set the tone early and then dominated the final moments to clinch the victory in a match that elicited the loudest reaction in Rural Retreat’s packed gym.

“After I got those first points, it just made me feel a hundred times better about that match,” Fortuner said. “I’m coming back from a hurt shoulder, but I’ve wrestled pretty well with it.”

In the end, however the Grundy Golden Wave remained golden.

The Wave lost four state champions – and eight seniors – from last year’s lineup, but the winning ways have continued.

“We had some kids waiting in the wings,” Fiser said.

One of those was Looney, a ninth-grader who came up with two pivotal pins against Riverheads and Rural Retreat.

“There was a lot of pressure and I knew I had to get a pin in both of ‘em,” Looney said. “I just wanted to shoot in, get them down and turn them.”

“We lost to Riverheads and Grundy on the last match and that stings,” Boyd said. “I told our guys they have to remember this feeling. Starting tomorrow, they can start fixing it, or be content with where they are.”

Riverheads went 2-1 and finished as runner-up in the event. Cody Cash (132) and Robson were the leaders for the Gladiators, who have finished either second or third at the state tournament the last four years.

“We’re knocking on the door a little bit,” said Riverheads coach Scott Swats. “We’ve got five freshmen and two sophomores in the lineup and these kids work hard. This was kind of a gauge to see where we are at. We’ll prepare a little more before we got to Salem for the state tournament next month.”

Grayson County lost all three of its matches on Wednesday.

The Blue Devils were Class 2 state runner-up to Poquoson in 2018 and 2019, before being reclassified to Class 1 beginning this season.

“The top teams in [Class 1] are better than the top of [Class 2]. There’s more depth,” said Grayson County coach Jay Coman. “As you move down, maybe some of the middle teams are a little tougher in [Class 2]. It’s going to be a dogfight in a month [at the state tournament] and I can’t wait to be there competing.”

“We felt like we held our own in the lower weights, but we just had two forfeits in the lineup that hurt us,” Coman said. “We didn’t have the numbers up top to really compete like we wanted to.”

When the state tournament takes place on Feb. 21 and 22 at the Salem Civic Center, expect those four teams who competed Wednesday to provide some more drama.

“If this is any indication of what the state tournament is going to be like,” Boyd said. “It’s going to be one fun weekend up there.”