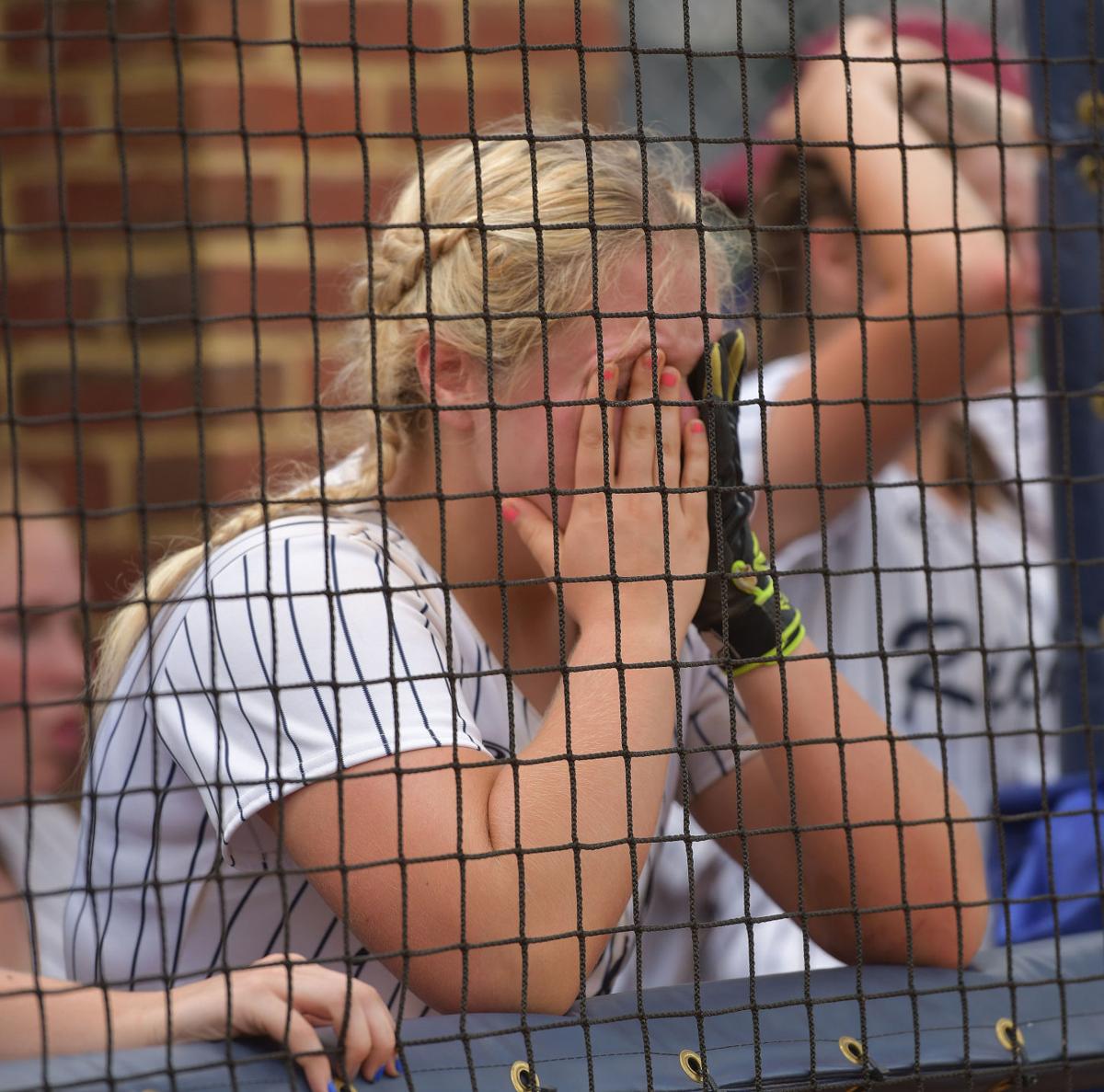 Richlands #13 Emma Crawford hides her face as the last out was made on Saturday and the team was runner-up in the Class 2 softball state championship game against Page County. 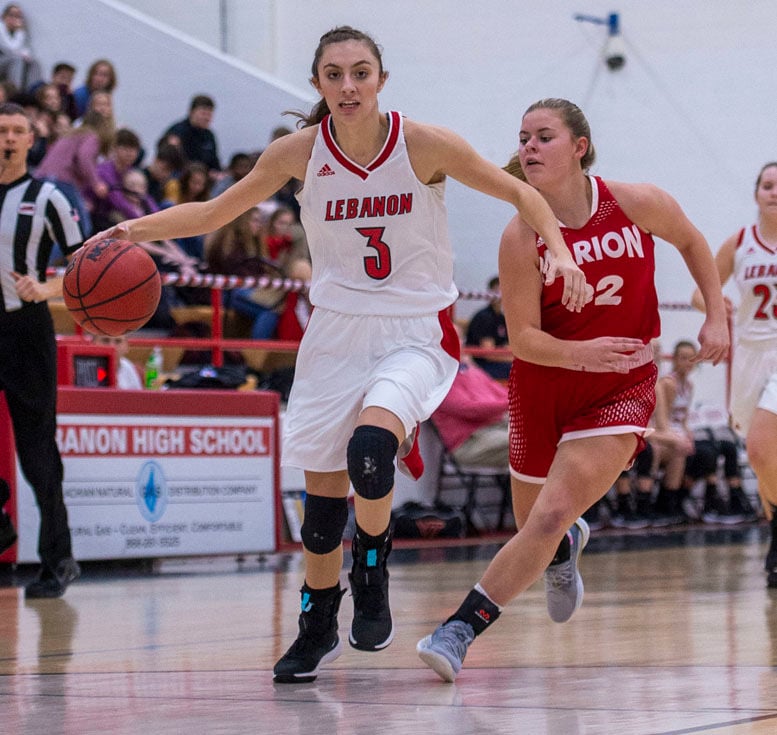 Lebanon’s Averie Price starred in basketball for the Pioneers but, like many high school athletes, saw spring sports put on hold because of the coronavirus.

Richlands #13 Emma Crawford hides her face as the last out was made on Saturday and the team was runner-up in the Class 2 softball state championship game against Page County.

Lebanon’s Averie Price starred in basketball for the Pioneers but, like many high school athletes, saw spring sports put on hold because of the coronavirus.

Justin Reed of Twin Springs was taking some hacks in a batting cage.

Lebanon’s Averie Price was at the grocery store with her mom, while Holston’s Carson Blackburn was stocking up on groceries in Damascus with his dad.

John Battle’s Reed Samuel was sitting in his living room.

Lauren Earls of Richlands was doing some homework online.

George Wythe’s Avery Mabe was relaxing in his bedroom with cell phone in hand.

It was just after 2 p.m. on Monday when Gov. Ralph Northam announced in a press conference that Virginia schools would be closed for the remainder of the 2019-20 academic year due to the coronavirus (COVID-19) pandemic. The move affects thousands of students in grades K-12 in the Commonwealth – from Chincoteague to Ewing – including the aforementioned senior student-athletes from Southwest Virginia and their classmates.

“People say that high school is over before you blink,” Price said. “That quote literally happened for every senior in Virginia today.”

At 3:34 p.m. on Monday, the Virginia High School League issued a press release that spring sports and activities were canceled.

However, the VHSL said it will hold a conference call today with its VHSL Management Crisis team to discuss spring sports and academic activities moving forward.

Could any part of the spring sports experience be salvaged?

Will that mean a shortened summer season or an all-comers type postseason tournament?

Would that be logistically possible?

Just like proms, graduation and other milestone moments for those seniors, it’s all uncertain at this point.

The VHSL said it will reveal its plans after Tuesday’s meeting.

“We need to support our Governor and State Superintendent. These actions were taken to protect Virginians, keep them safe and healthy and to help slow the spread of the COVID-19 virus,” VHSL executive director Billy Haun said in a press release. “Our Crisis Management team is made up of excellent school representatives and has been vital in all deliberations regarding COVID-19. In every situation, every decision we make has been, and will be, in the best interest of public health, including that of, most importantly, our student-athletes, coaches, administrators, and families.”

VHSL spring sports were supposed to hold their first events on March 16, but three days prior to that date the league mandated a two-week hiatus on contests. Then came Monday’s news.

Perhaps no team took the news harder than the softball squad at Richlands.

“I cannot emphasize how much these young women are hurting at this point,” said Richlands coach Ronnie Davis. “I have spoken to a few of them by phone and can hear the heartbreak in their voices. It was extremely important to them to be able to compete and defend their state championship.”

The baseball teams at Lebanon (Class 2) and Abingdon (Class 3) were among the favorites to win it all in their classifications.

A few practices and perhaps a scrimmage were all that some baseball, softball, soccer and track and field athletes got to experience thus far in 2020.

“It’s a sad time right now for everyone,” said Samuel, a track and field star at John Battle. “As seniors, it is really tough for all of us. I know many of my friends who have cried today and are having a really hard time with the situation. There are so many things we will be missing that should be great memories for us. But we know the closures are necessary.”

“So many emotions have flooded my mind and I have cried until I can’t cry anymore,” Carter said. “I must say that this is the greatest test that I have ever faced in my whole school career, one that I have not studied or prepared for. Thankfully, we are experiencing this low point to learn the life lessons we would not be able to any other way.”

Consider the case of Blackburn, who only plays baseball at Holston and had spent months eagerly anticipating his final season.

“I was more dedicated than I ever had been before,” Blackburn said. “I practiced hitting three to four times a week with my dad, I worked out with a personal trainer three times a week to gain muscle and speed, I pitched four times a week, I went to every workout and I worked hard to encourage my teammates to do their best as well. I was prepared, excited and ready for a successful last year as a Cavalier.”

What did Eastside baseball coach Chris Clay tell his team?

“This is definitely not what we expected and there is nothing wrong with being confused, disappointed, sad, even angry as long as it doesn’t consume us,” Clay said. “My message to them [seniors Landon Trent and Justin Sexton] and the team is the same as it was 10 days ago. As soon as you start feeling sorry for yourself, focus on those with bigger problems than we have. And try to help them if you can.”

Tuesday was supposed to feature some interesting games on the docket in Southwest Virginia.

Eastside would host Honaker on the baseball field, rivals Virginia High and John Battle were to square off in tennis, Abingdon and Virginia High would renew their baseball rivalry.

Instead, the baseball, softball and soccer fields, as well as the tracks and tennis courts, will be empty.

“As far as spring without baseball, it definitely speaks to the magnitude of the situation,” Clay said. “It’s not baseball, but we’re all playing a much bigger team sport right now. And everybody has a role to keep our country, safe, strong and hopeful. … Glass half-full; very thankful for the brilliant doctors and leaders that will see us through.”