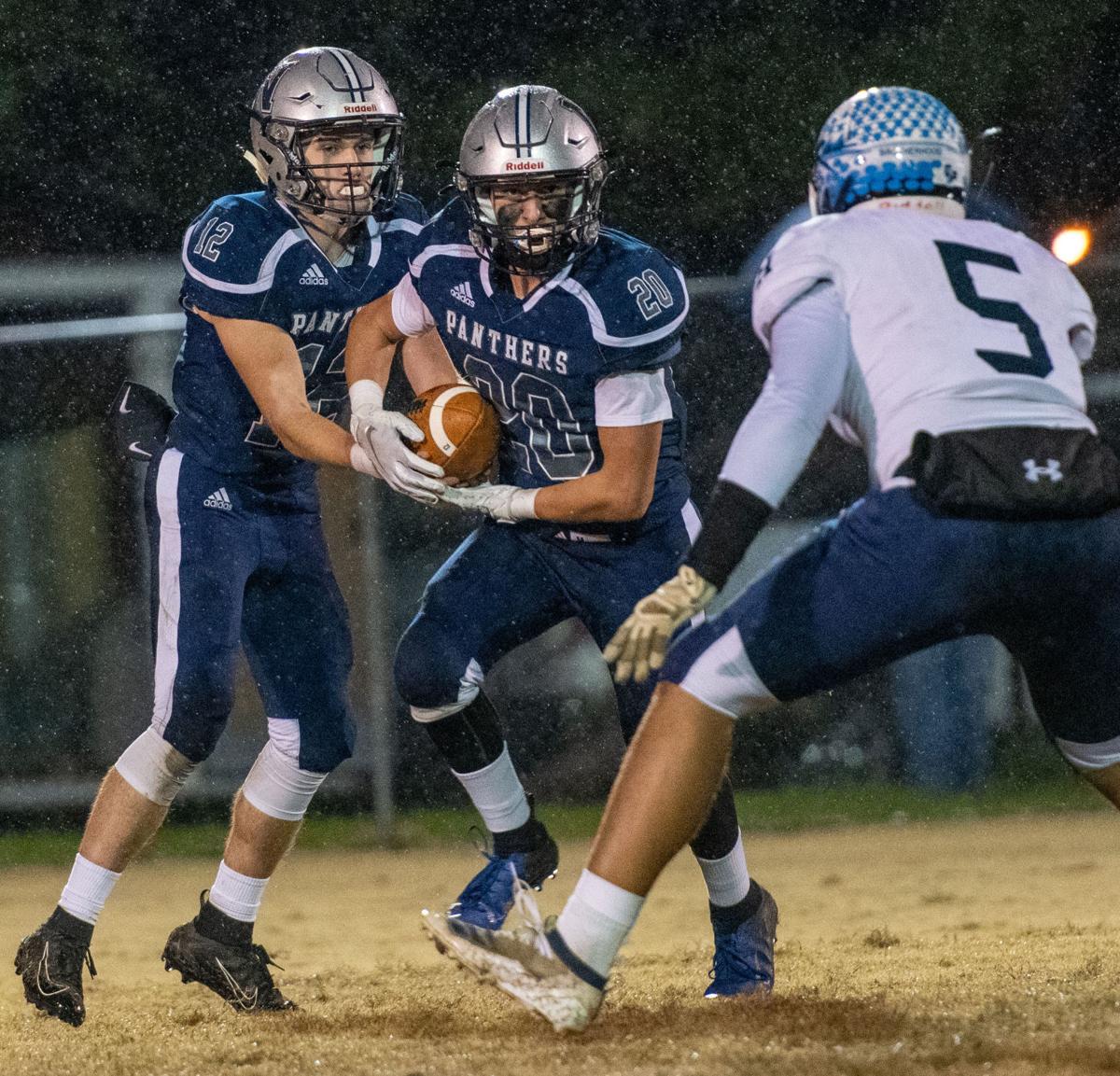 Northwood #12 Seth DeBusk hands off to #20 Tyler Waddle as Patrick Henry #5 Ean Rhea closes in to tackle during game on Thursday night in Saltville. 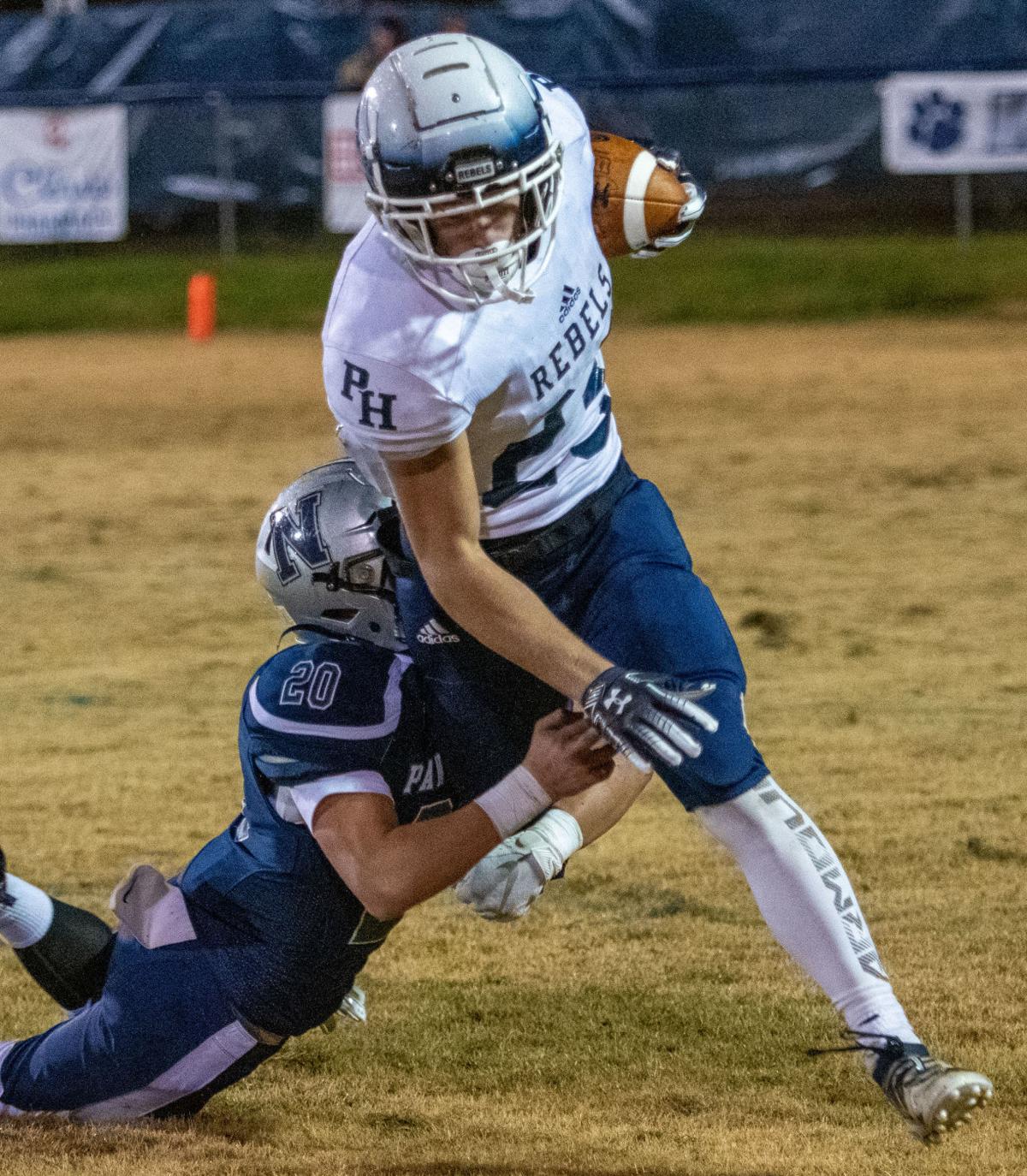 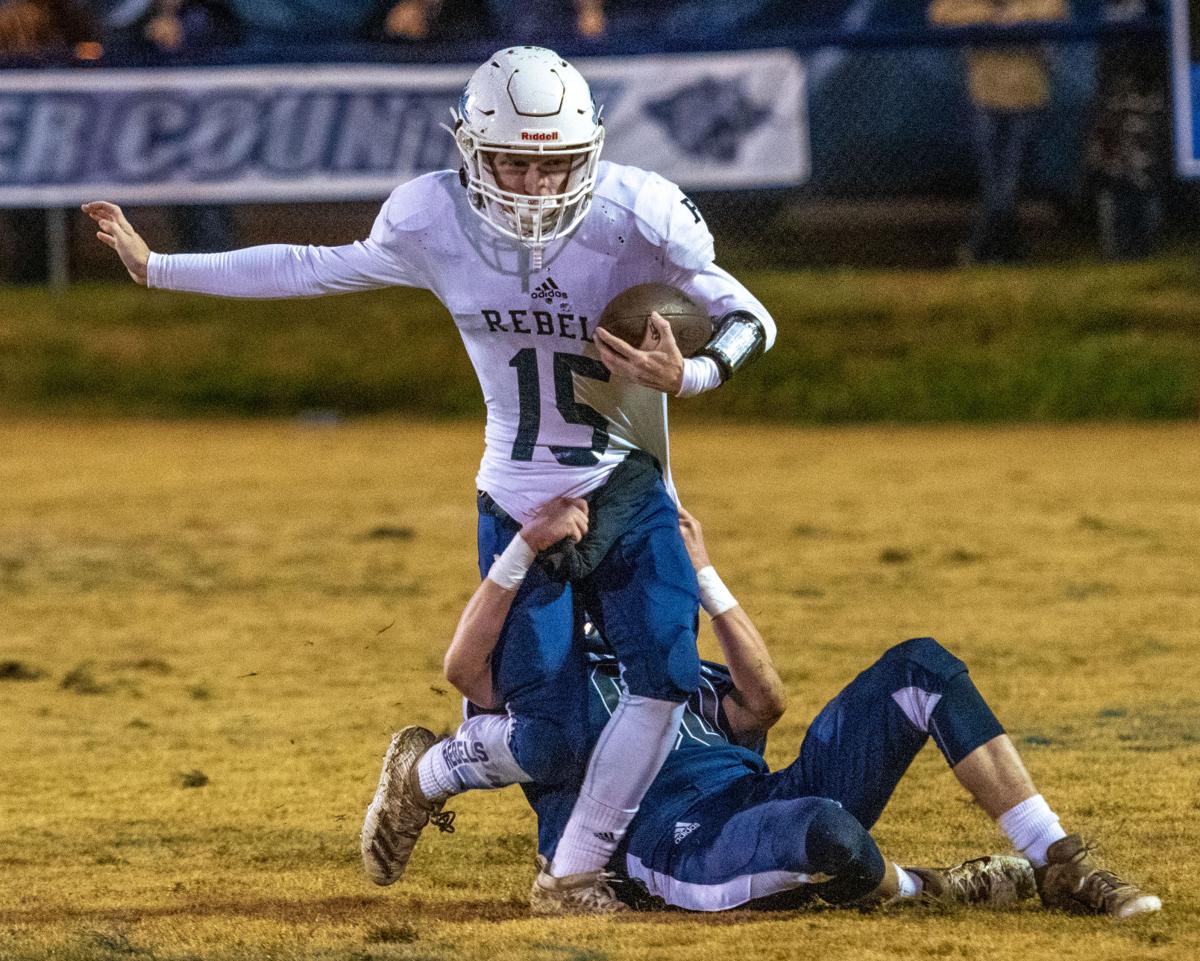 Patrick Henry #15 Dakota Rector gets brought down by Northwood defender. 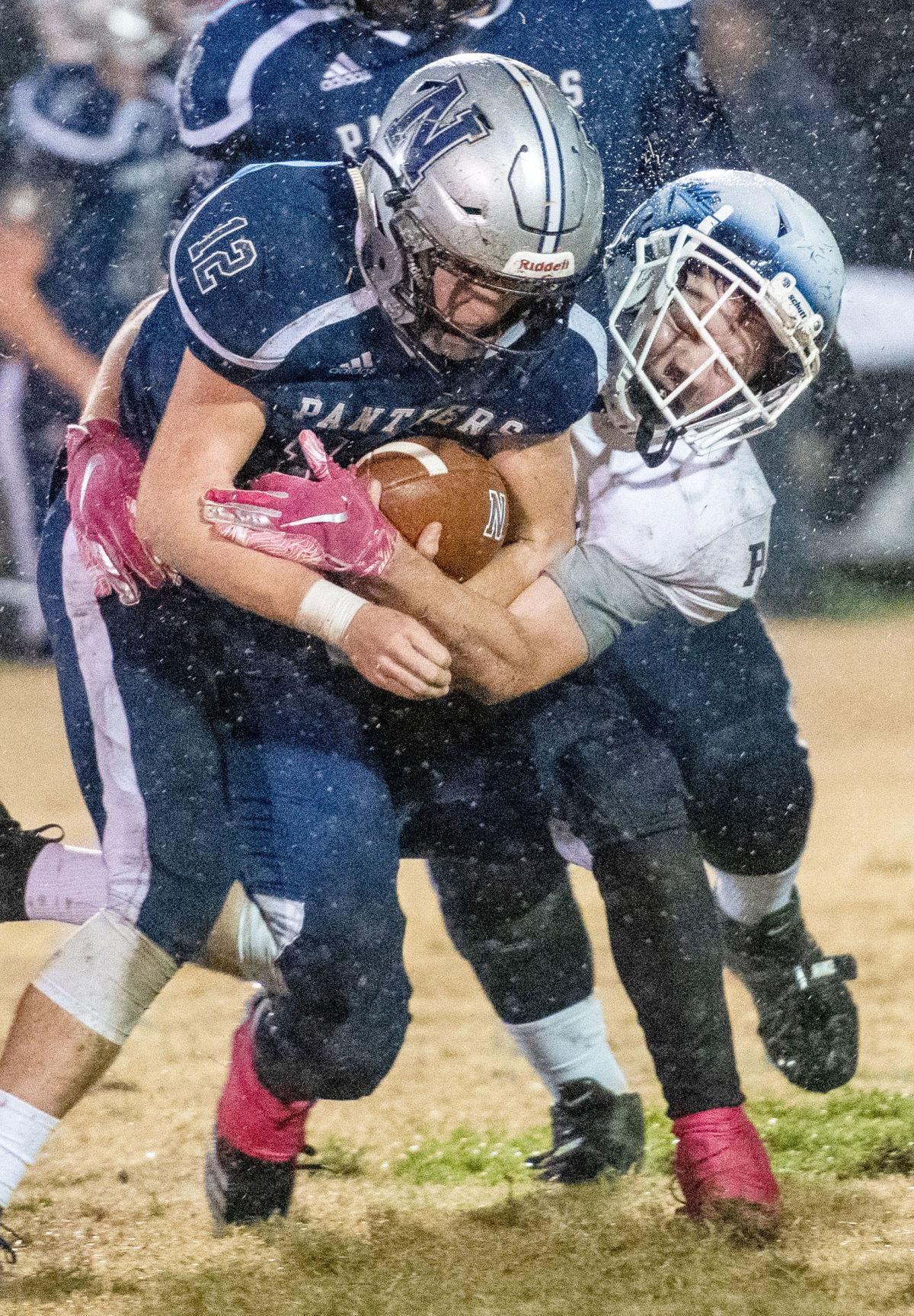 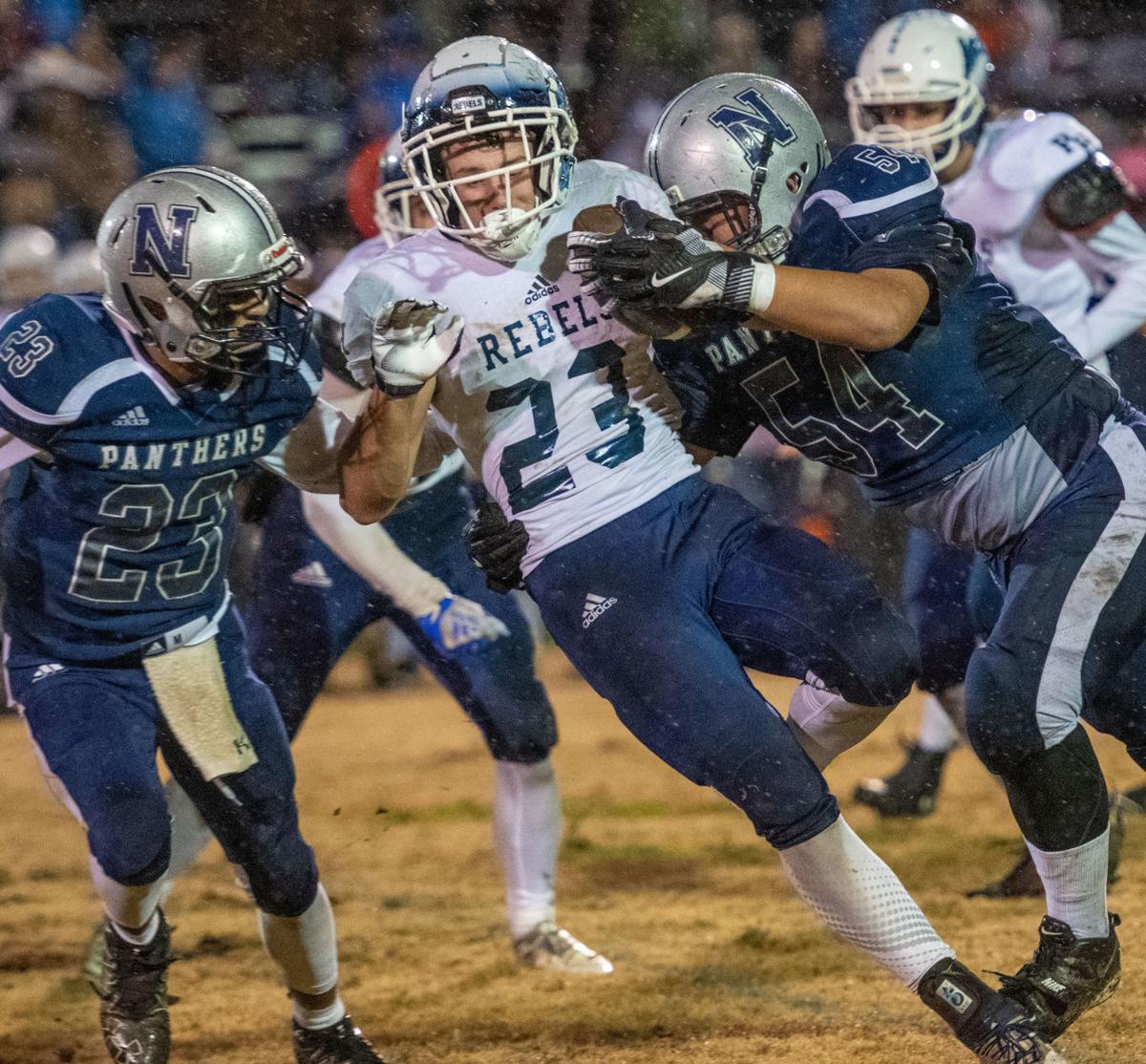 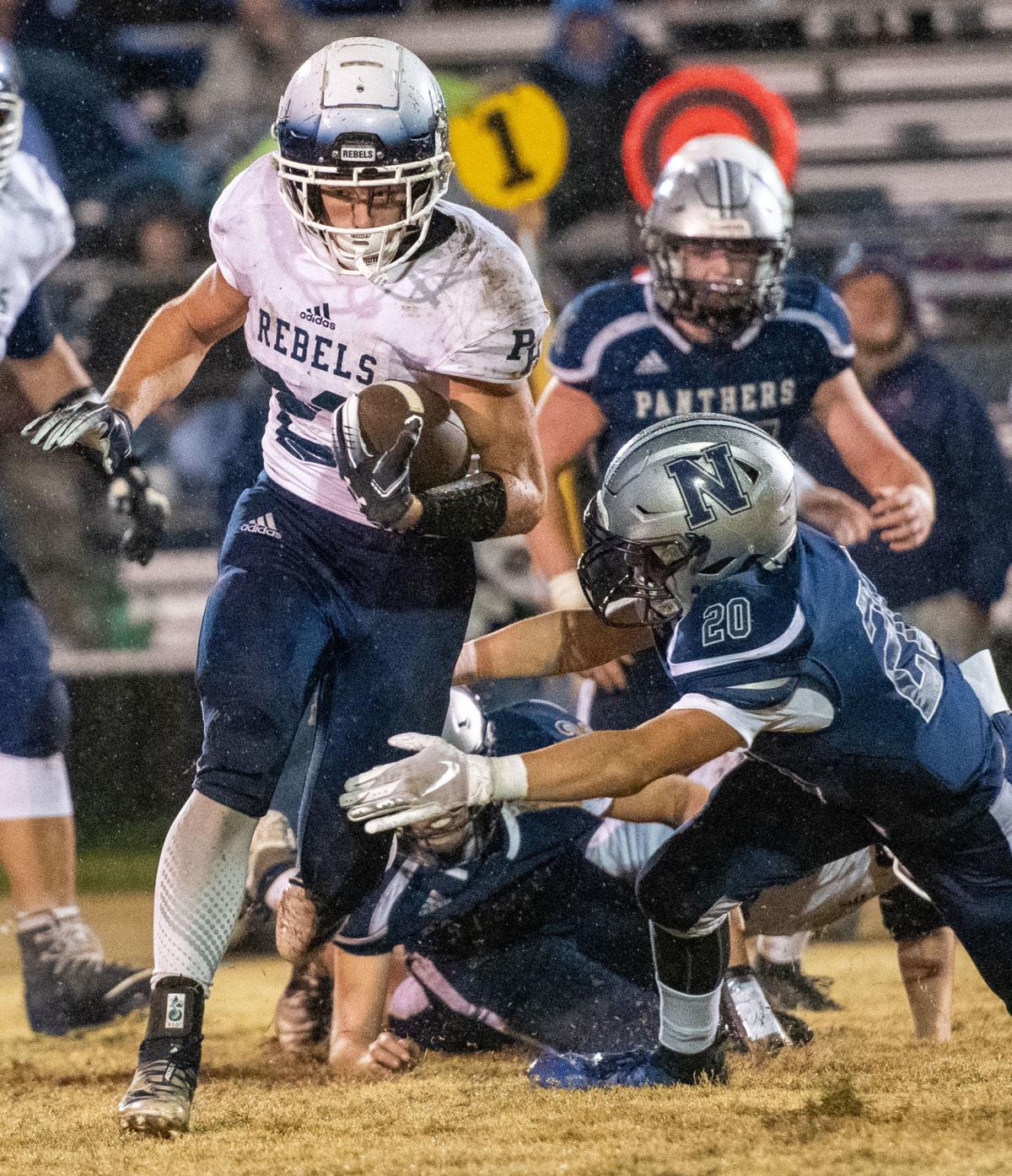 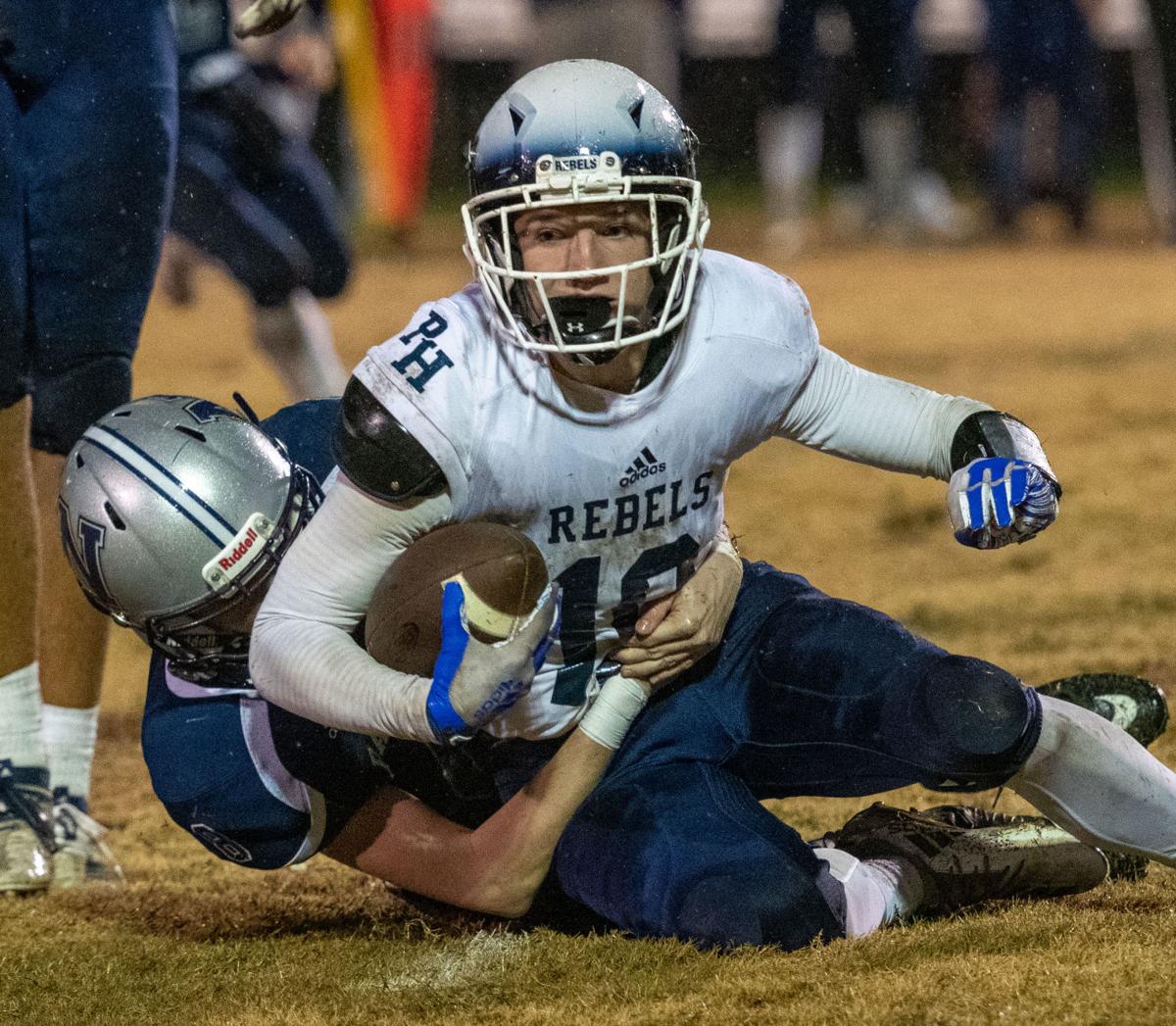 Patrick Henry #10 Connor Beeson is brought down by Northwood defender. 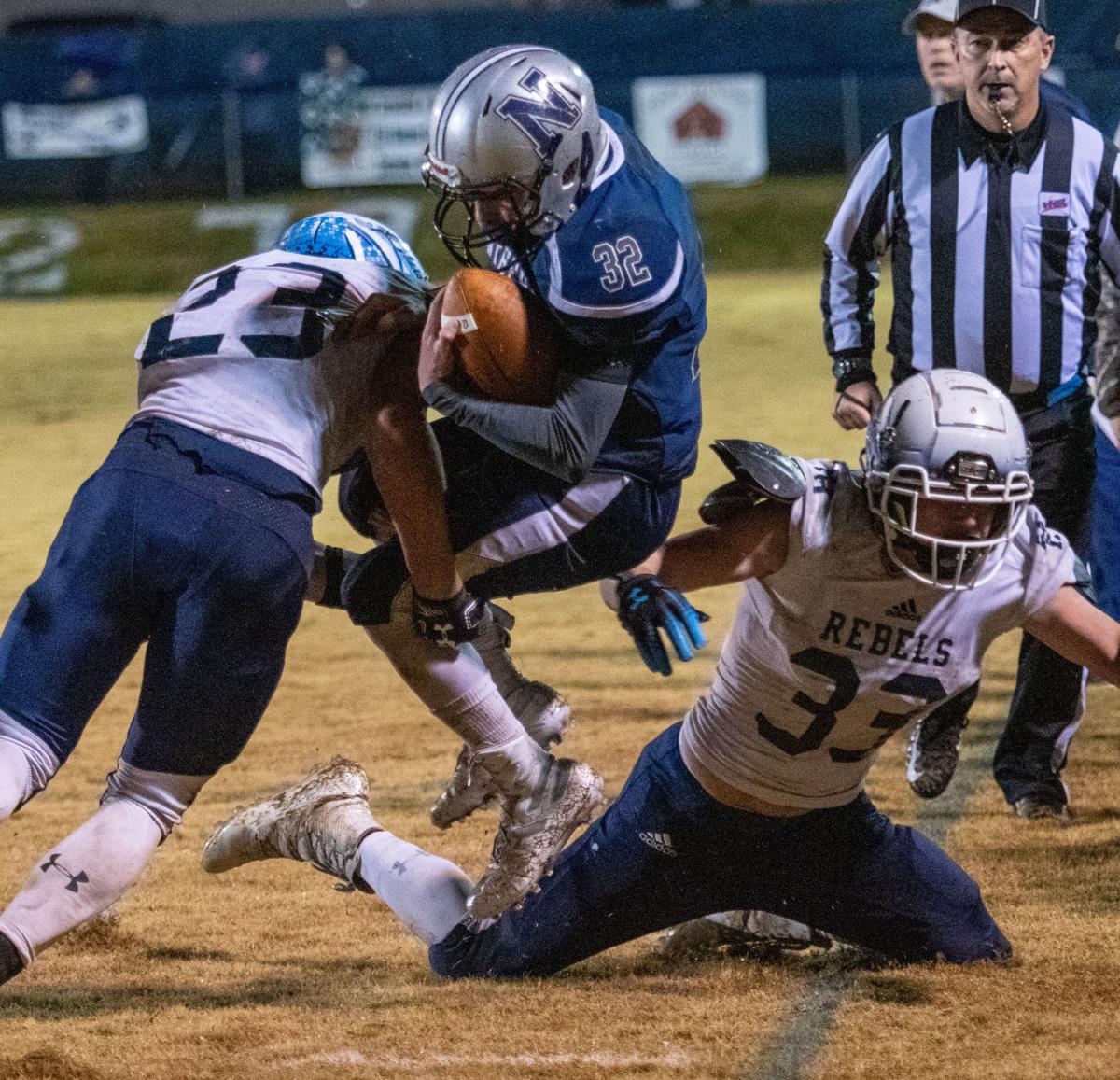 Northwood #32 Josh Robbins is taken out of bounds by Patrick Henry #33 Isaac Chaffin and #23 Cody Smith.

Northwood #12 Seth DeBusk hands off to #20 Tyler Waddle as Patrick Henry #5 Ean Rhea closes in to tackle during game on Thursday night in Saltville.

Patrick Henry #15 Dakota Rector gets brought down by Northwood defender.

Patrick Henry #10 Connor Beeson is brought down by Northwood defender.

Northwood #32 Josh Robbins is taken out of bounds by Patrick Henry #33 Isaac Chaffin and #23 Cody Smith.

“It is a dream come true, just to rewrite the history books,” Patrick Henry senior Cody Smith said. “It just means a lot to us as a team. We are just looking forward to keeping this momentum.”

Smith scored three touchdowns, along with recovering a fumble that sparked a 23-point third quarter, lifting Patrick Henry to a 36-0 Hogoheegee District victory on a wet Thursday night at Northwood.

“I think you have to give the young men at Northwood and their staff, they came out with a good game plan and they played very hard,” said Patrick Henry head coach Mark Palmer, whose Rebels came in after last week’s win over Chilhowie. “We came out a little flat. We had a big win last week and that is on me.”

Patrick Henry (10-0, 4-0) will enter the Region 1D playoffs next week as the top seed on its home field.

“What we have to do we have to go ahead and realize that it has been a long season, but it could end next Friday so we don’t need to be complacent,” Palmer said. “We have to really continue to work hard and understand that the smallest details in practice we have to pay attention to.”

Northwood (1-9, 0-4) didn’t go down easy, trailing just 7-0 at the break. The Panthers turned the ball over three times on downs, twice in the first half deep in Patrick Henry territory.

“Something we have talked about all week is no matter what finishing the season fighting as hard as we can,” said Northwood head coach Tim Johnson, a former head coach at Patrick Henry. “That is not always easy for teams in our position, but you have got to give a lot of credit to the kids on this football team, that they maintained the right attitude and they came out tonight and they fought the number one team in Region D.”

Smith, who finished with 184 yards on the ground, may have made his biggest play on the opening kick of the second half when the bouncing ball ricocheted off a Northwood player and he picked it up.

“We needed to set them straight right there,” Smith said. “They were coming out hyped, 7 and 0 and we just had to prove them wrong and stop the momentum.”

He followed that up with a 28-yard run up the middle to the end zone for the 14-0 lead.

“With them having a lot of excitement we had to be prepared for a real hard first series and Cody did that and then scored right off the bat,” Palmer said. “That was kind of the blow to the gut.”

Smith, who scored on an 8-yard run in the second quarter, added a 3-yard run for a touchdown to extend the margin to 20-0 with 7:38 left in the third period.

“He is a hard runner, he can spin and cut,” Palmer said. “He has just been a monster for us on both sides of the ball this year.”

The lead grew to 30-0 in the third on a 25-yard field goal by Colby Taylor and a 3-yard run from Connor Beeson, who finished with 83 yards. Both were helped by huge holes opened by the Rebels. Beeson’s score came two plays after an interception by Chase Brown.

“The line did a great job, they moved bodies. They just make plays,” Smith said. “[Beeson] steps up when we need him and I am proud of what he has accomplished.”

That duo has been a formiable force since Zach Brown injured an ankle has been missing for the last five weeks. Smith expects him to be back for the postseason.

“He will be back for playoffs,” Smith said. “He started practicing this week so we will him next week.”

Patrick Henry finished off the scoring when freshman J’Kwon McPhail picked up a loose ball and dashed 61 yards for the score.

Northwood graduates just two seniors so the future could be bright for the Panthers, whose lone win this season came against Twin Valley. One of those seniors, Josh Robbins, ran for 65 yards in his final game.

“We had our ups and downs this year, but overall I feel like we are better now than we were on August 1,” said Johnson, whose Panthers got a fumble recovery by Justin Zhang. “How good is going to be determined by what happens from after Thanksgiving until August.”

Patrick Henry, which was led in tackles by Isaac Chaffin, will now wait to see who they will play next week in the first round of the VHSL playoffs.

“We have just got to continue the momentum and practice hard and play how we play,” Smith said. 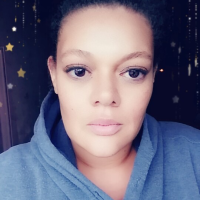