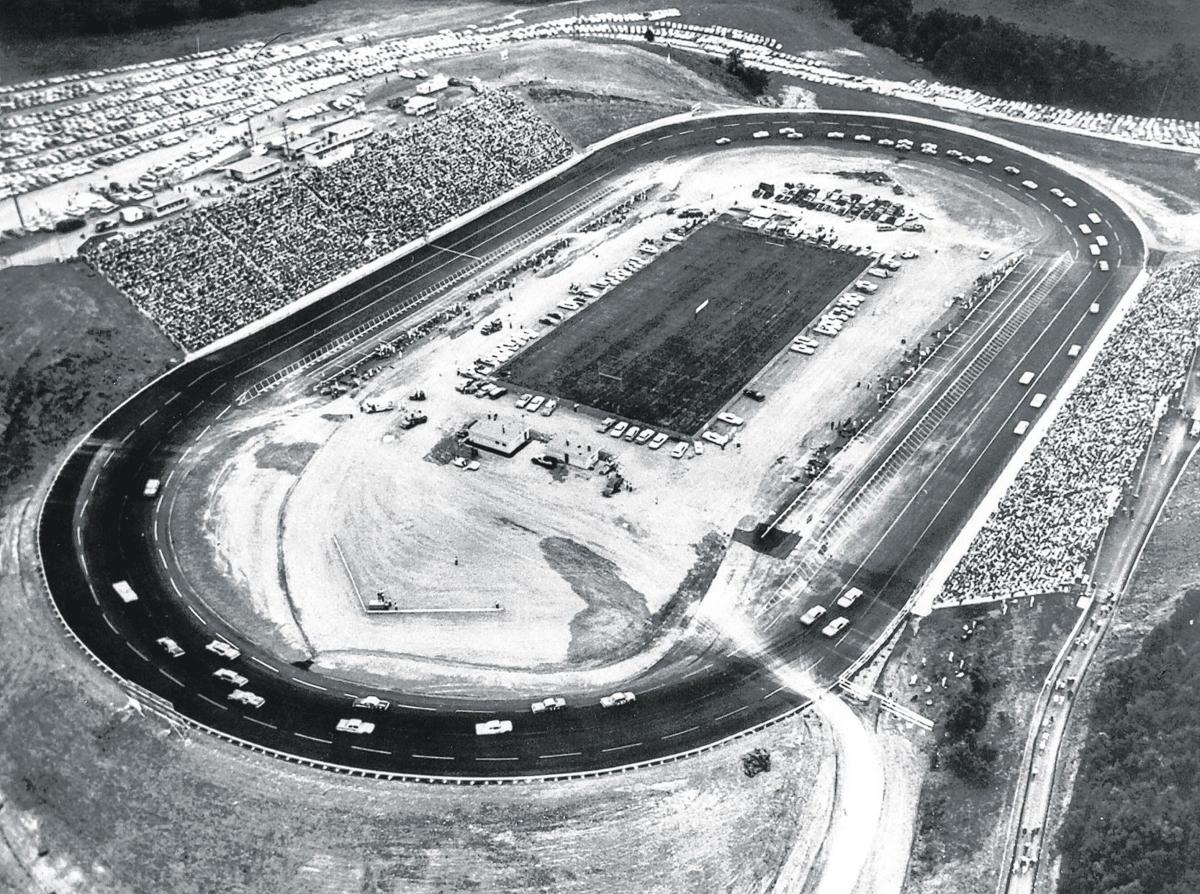 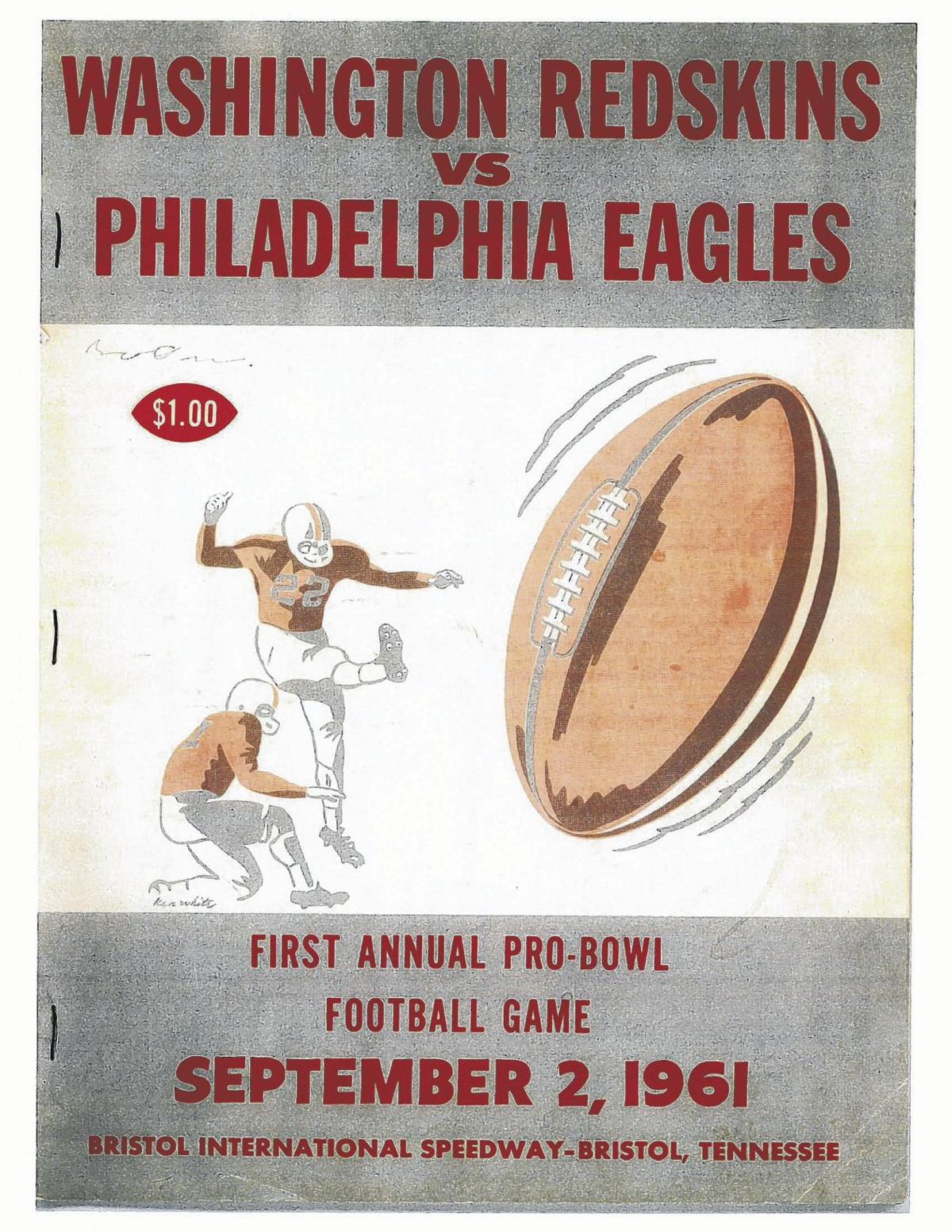 Long before the Battle at Bristol took place at Bristol Motor Speedway, there was a professional football exhibition at the world’s fastest half-mile. It was not a resounding success nor did it come close to smashing attendance records.

A crowd of 8,500 fans watched the Philadelphia Eagles take a 17-10 win over the Washington Redskins on Sept. 2, 1961 in a National Football League preseason game played in the infield of Bristol International Speedway, as it was known then.

The turnout was much lower than expected since “the speedway stadium is designed to comfortably seat more than twice that many,” wrote Gene Thompson of the Bristol Herald Courier.

Maybe some folks stayed home on that Saturday evening and tuned their televisions to reruns of “My Three Sons,” “Bonanza” or watched on the tube as Richard Boone blasted away another bad guy with his Colt .45 on “Have Gun-Will Travel.”

Date night for some young couples might have called for a trip to the Moonlite Drive-In to watch Elvis Presley in “G.I. Blues,” instead of sitting in the bleachers and observing Sonny Jurgensen throwing touchdown passes for the Eagles.

Perhaps some preferred the preps to the pros when it came to the pigskin and swung over to the Stone Castle to witness John Battle High School’s 19-6 win over the Chilhowie Warriors.

It was the same day that Roger Maris hit his 52nd and 53rd home runs of the season for the New York Yankees, so conceivably some could have been reveling in his chase of Babe Ruth’s single-season record and might’ve still been in baseball mode.

Regardless, it has taken 55 years for the bold experiment of a football game to be tried again at the high-banked shrine referred to as the “Last Great Colosseum.”

Saturday night’s contest at BMS between Virginia Tech and the University of Tennessee is expected to be the most highly attended college football game ever played, with attendance upwards of 150,000. It will be televised nationally by ABC and will be a sports spectacle like none this area has ever seen.

About the only thing the “Battle at Bristol,” has in common with the first football game played at the facility is that it will take place on a Saturday night in September.

However, that 1961 game was so unique in its own right that those who suited up still recall their visit to Bristol.

“I tell you what, I have great memories,” said Maxie Baughan, a star linebacker for the Eagles in 1961. “That’s the only time I ever played at a racetrack.”

The Philadelphia Eagles were the defending NFL champions in 1961, but the Washington Redskins were the fan favorites.

This was five years before the Atlanta Falcons would come into existence and the Cincinnati Bengals were not around yet either, so many fans in the Mountain Empire looking for a regional team to root for picked the Redskins.

“Back in those days, the Redskins were the only team really serving the Southeast,” said Sam Horner, who played for the team in ’61. “Our exhibition games usually started in Jacksonville and then went to Winston-Salem, Richmond and Norfolk. That year, we did go to Bristol.”

Washington fielded the youngest team in the NFL at the time and had lost all three of its exhibition games when it arrived in Bristol.

Philadelphia was unbeaten in the preseason and Jurgensen had stepped in seamlessly as the signal-calling successor to the recently retired Norm Van Brocklin.

The teams arrived in Bristol the day before the game and had a workout that evening at the track. Public relations directors from both squads spoke to the Bristol Kiwanis Club at the Hotel General Shelby on Thursday.

Fred Dugan, a standout for Washington, was able to catch up with Jerry Watford, his former teammate at the University of Alabama who was at that time coaching the Virginia High Bearcats.

“As a city, they welcomed us and were very nice,” Horner said.

It didn’t take the coaches or veteran players long to realize, however, the conditions on the field were far from pristine.

“It was horrible and there were some holes in the field, but we played in it,” said Billy Ray Barnes, a Philadelphia halfback.

He went on to say that players didn’t complain about the conditions of the field because they “just wanted to play football. We played an exhibition game and made 50 bucks, what the heck. That was a good night.”

For some, the facility didn’t matter much.

“That was my rookie year with the Redskins and I was trying to make a name for myself and do this and do that,” said Jim Cunningham, a fullback. “I was just looking for good things to happen no matter where we were playing.”

There weren’t any serious injuries sustained by either side, even though one incident remains in Baughan’s memory bank.

“They put a cyclone fence, a chain-link fence around the field and it was very close to the sideline,” Baughan said. “Ralph Guglielmi was one of the quarterbacks for the Redskins and he scrambled one time and got pushed up under that fence and it was like razor blades. It just about cut his uniform off.”

As for the game itself?

Jurgensen was the star as he completed 9-of-15 passes for 145 yards and hooked up with Tommy McDonald and Pete Retzlaff on scoring strikes.

There was a benches-clearing scuffle in the second quarter, but tempers had cooled by halftime. Since there was only one bathroom to accommodate the players, both teams spent the intermission at one end of the field relieving themselves and having a cigarette.

The sight lines weren’t perfect to see the action, since there was no “Colossus,” videoboard hanging up to project the action.

“They complained they couldn’t see anything,” said Riley Gunnels, a defensive tackle for the Eagles. “Some fans were saying they should have brought binoculars. I am originally from Calhoun, Georgia, just below Chattanooga, so I had a few of my relatives there to see the game. Sonny Jurgensen had some of his family there, too.”

“They would clap their hands and say “yea,” but the stands were so far away it would come late, because it was echoing,” Baughan said. “It was something.”

For Horner, the night marked a shining moment.

He led the Redskins with 26 rushing yards, turned a screen pass from rookie quarterback Norm Snead into a 13-yard gain in the fourth quarter and also handled the punting duties.

A former star at Virginia Military Institute, he played well with his wife, Lynne, in the stands to witness it all.

“When I went to VMI, I had a number of teammates that came from Bristol,” Horner said. “Jimmy O’Dell, he was from Bristol if I remember properly. It was nice to go back and see where they lived.”

Washington center Bob Whitlow never played football again at a race track, but he did compete on an oval. He would become a driver on the USAC and NASCAR circuits after his football playing days were over.

“I did it for four years, just until I wrecked my car where I couldn’t repair it,” Whitlow said. “I didn’t have a sponsor, so back then it was just drive until you tear ’em up.”

Another neat connection from 1961: Don Oakes from Virginia Tech played for the Eagles and former University of Tennessee star Bill Anderson suited up for Washington.

A reserve for Washington was Tom Osborne, who would become one of the greatest college football coaches of all time at the University of Nebraska.

There is one common sentiment the players from Saturday’s contest and those from 1961 will likely share.

“We had fun,” Baughan said.