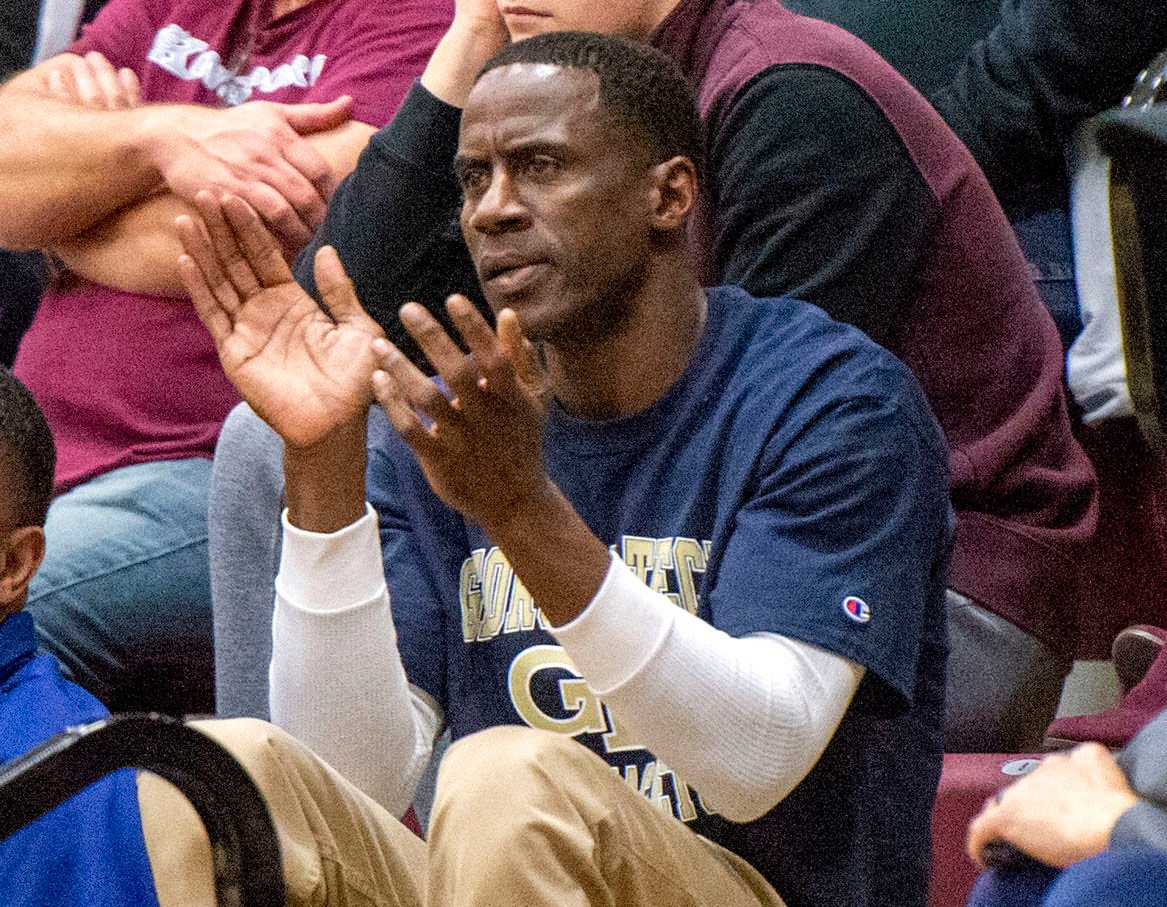 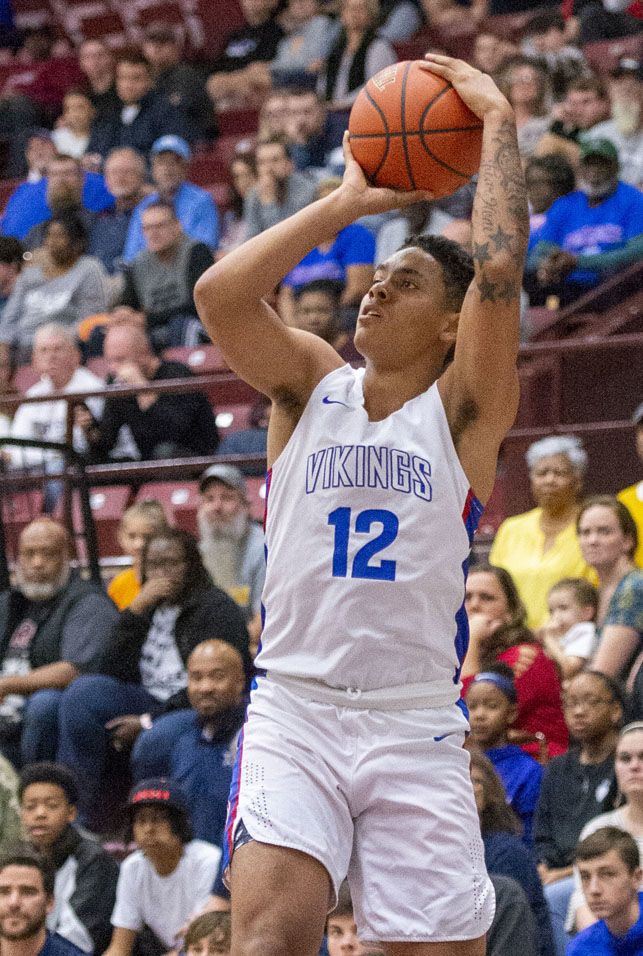 BRISTOL, Tenn. – The 54-year-old man sat in the stands at Viking Hall on Saturday night, wearing a dark blue T-shirt with a gold Georgia Tech logo emblazoned on the chest.

He’d occasionally stand up when a good play was made.

There were frequent words of encouragement and prompting coming out of his mouth, mostly aimed at the kid for the North Mecklenburg High School Vikings wearing No. 12.

Vernon “Mad Max” Maxwell is as fiercely competitive as he’s always been and looks like he’s in good enough shape to still log some valuable minutes for a pro team.

However, the two-time NBA champion gets his basketball fix these days by watching his son, Tristan, do his thing on the hardwood – albeit not as a silent observer.

“Sometimes I have to light a fire under his ass and get him going,” Vernon Maxwell said.

The going is good for Tristan Maxwell these days and he will be in the spotlight once again as North Mecklenburg plays the Mentor Cardinals from Ohio today at 7 p.m. in the semifinals of the 37th annual Arby’s Classic.

“It kind of feels the same,” Tristan Maxwell said. “I like the atmosphere here and a lot of people come to watch. It’s good to be back in Bristol and I really like this tournament.”

After scoring 2,450 points while playing for head coach Norm Sloan at the University of Florida, Vernon Maxwell’s professional hoops odyssey included eight teams over the course of 13 seasons.

He suited up for the San Antonio Spurs, Houston Rockets, Philadelphia 76ers, Orlando Magic, Charlotte Hornets, Sacramento Kings, Seattle SuperSonics and Dallas Mavericks over the course of 855 regular-season games from 1988-2001.

His greatest fame came with the Rockets and he remains a fan favorite in Houston.

“I had a great career,” Vernon Maxwell said. “I won two championships and got to play against the greatest players ever in NBA history. I feel like I’ve been blessed and I just want to pass it on to my son and hopefully, he can be blessed in the same way.”

Maxwell’s defining moment came in the 1994 NBA Finals as he made several clutch plays in helping the Rockets beat the Patrick Ewing-led New York Knicks in seven exhilarating games.

“That’s the biggest stage – playing in the Finals,” Mad Max said. “I dreamt about it, was able to do it and then the cream on the cake, I was able to win it too.”

Tristan Maxwell has studied the video highlights of his father’s exploits.

The battles with Michael Jordan.

His old man is a valuable mentor.

“He taught me a lot about scoring the ball and how to get open and shoot the ball,” Tristan Maxwell said. “We used to get up a lot of reps. Shooting, shooting and shooting.”

However, Tristan Maxwell isn’t as menacing as his famous father, who played with unparalleled passion and was aggressive in every way.

“I just want [Tristan] to get more of a dog in him,” Vernon said. “I think that will come.”

Being the son of a professional athlete isn’t easy and there have been some tense moments when father and son didn’t see eye to eye.

“I know it was hard for him at times,” Vernon said. “He would tell you that I’ve stayed on him and been his biggest critic – a lot of cussin’ and fussin’. We fell out a lot, but he kept listening and working hard and to his credit became the player he has become.”

Make no mistake that Tristan Maxwell is his own guy.

“I’ve heard a lot of talking and there are some haters, because my dad played in the NBA,” Tristan Maxwell said. “But I try to block it out and I just feel like I’m a regular person.”

A regular person who happens to be among the nation’s top high school hoopsters.

Tristan Maxwell’s introduction to Viking Hall came in 2017 in one of the most memorable games in the storied history of the Arby’s Classic.

Maxwell tossed in 25 points as North Mecklenburg notched an 80-64 first-round victory over Mac McClung and Gate City Blue Devils in front of a standing room only crowd. McClung is now a sophomore guard at Georgetown University and one of the Big East Conference’s top playmakers.

“That was a really awesome game,” Tristan Maxwell said. “I rewind that back in my head every day, really. [McClung’s] really gotten better from his first year until his second year [at Georgetown] I’ve noticed.”

Maxwell’s game has expanded as well since that matchup.

“I think when Tristan was a 10th-grader he was more of just a shooter,” said North Mecklenburg coach Duane Lewis. “He does that well now, obviously, but he’s more complete. He can really pass the ball and he can get others involved. Two years ago he was 170 [pounds] and now he’s 205 and that added strength from the weight room has helped. He was more of a spot-up shooter [in 2017], but now he really has the ability to take people off the dribble too.”

That versatility is a reason why he’ll be playing next season for the Georgia Tech Yellow Jackets of the Atlantic Coast Conference.

“There was just so much love there,” Tristan Maxwell said. “It felt like I was at home when I went on my official visit to Georgia Tech. Coach [Josh] Pastner talked to me about how I was going to fit in with their team. I just felt like that was my best fit.”

The Vikings are a favorite to win the NCHSAA Class 4A state title.

Maxwell has been masterful thus far in his second Arby’s Classic appearance, starring in wins over Sevier County and The Webb School of Bell Buckle, Tennessee.

The kid has a grasp on things and isn’t bothered by the outside noise or pressure.

“He’s learned to tune it all out,” Lewis said. “He lets the game come to him now.”

Just call it the Max Effect.

“It’s been a long haul and journey for him,” Vernon Maxwell said. “I’m proud of him and very excited about watching him at the next level. Hopefully, we can finish this season up the way he wants it and that’s with a state championship.”