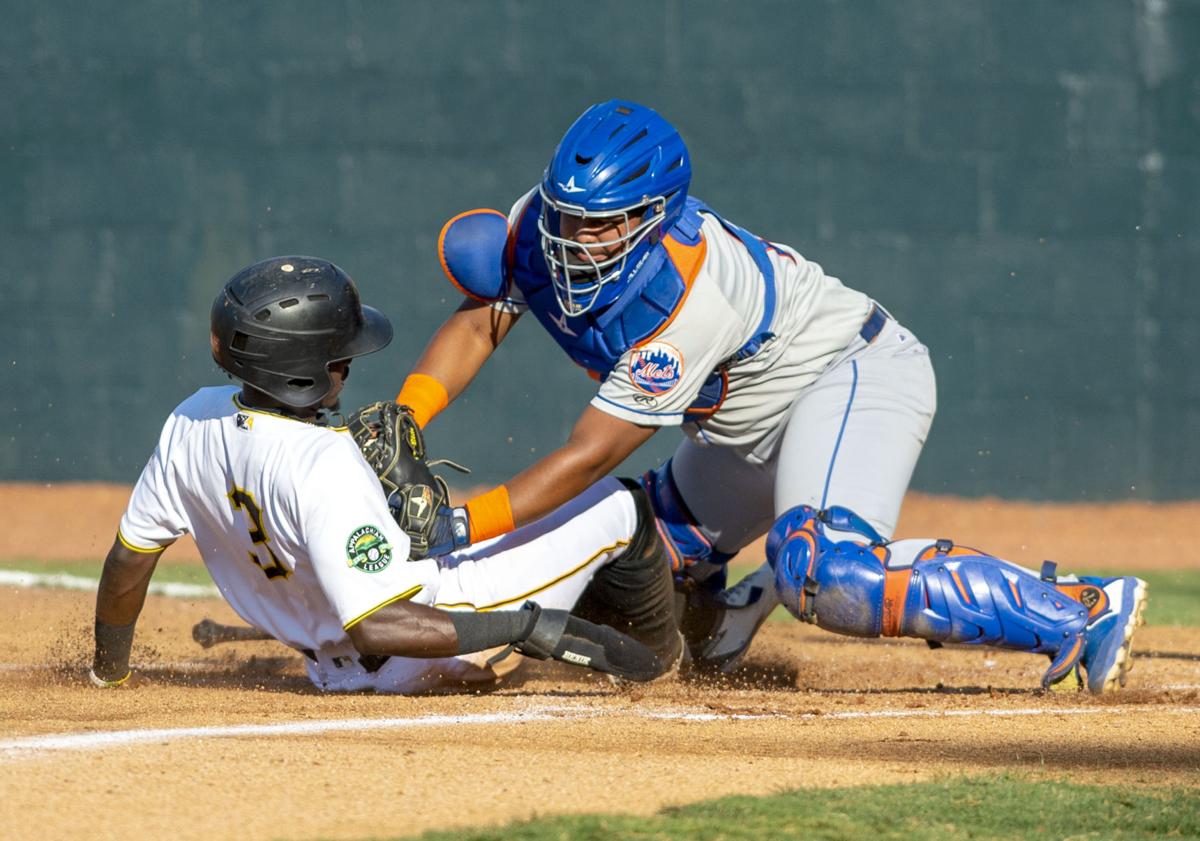 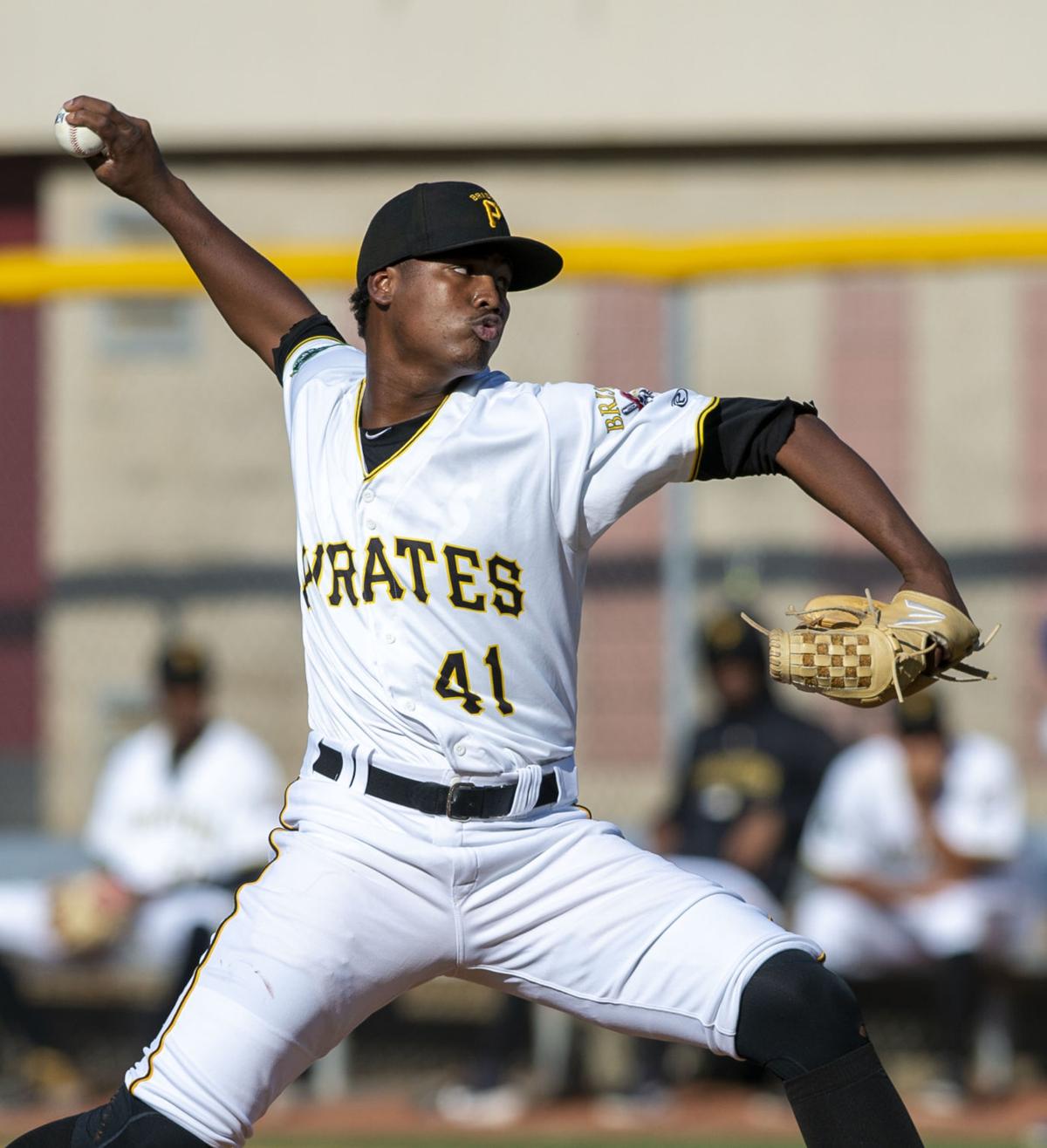 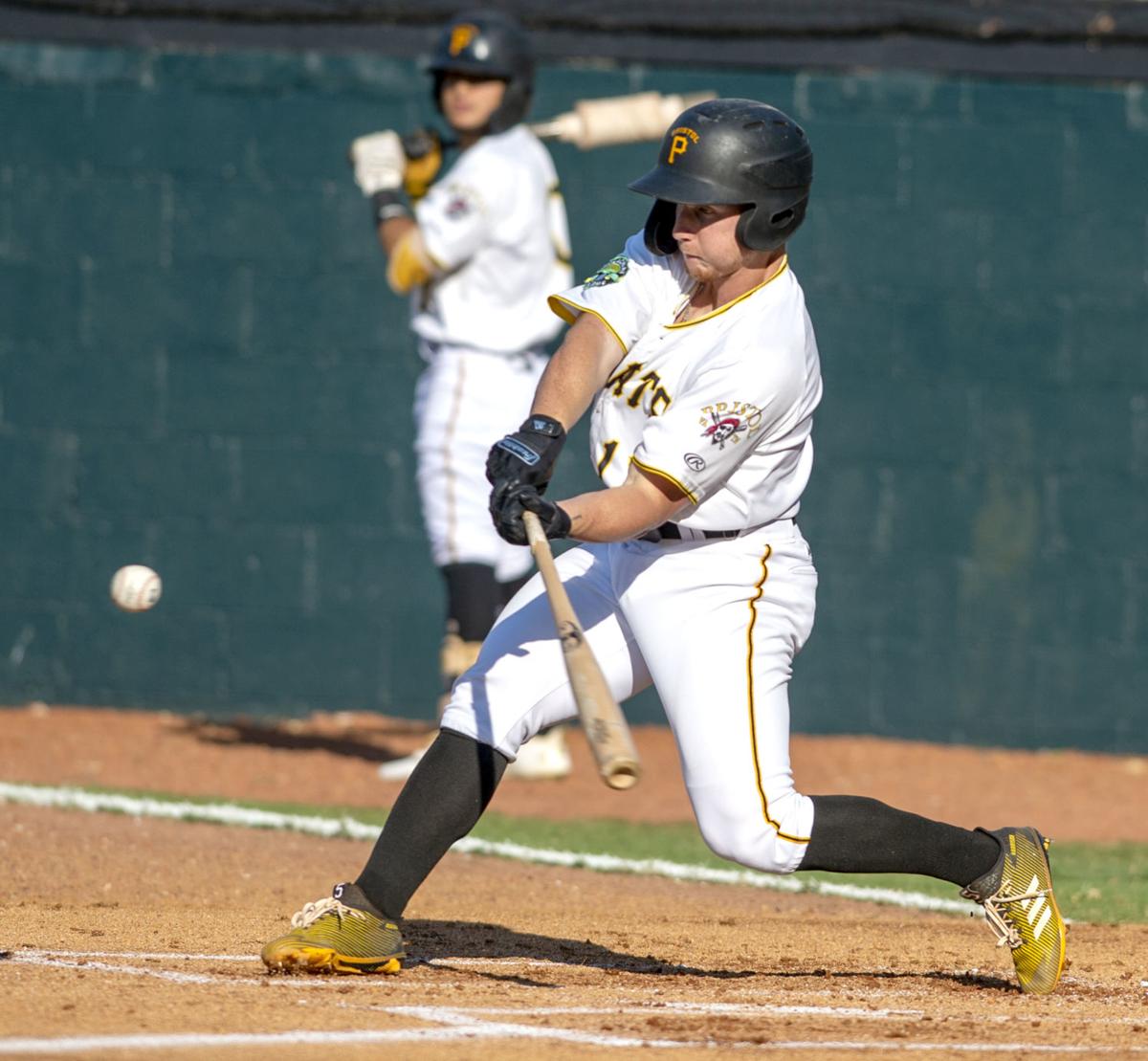 Bristol Pirates Aaron Shackelford connects on a pitch and hits it off the rightfield fence for an RBI double. 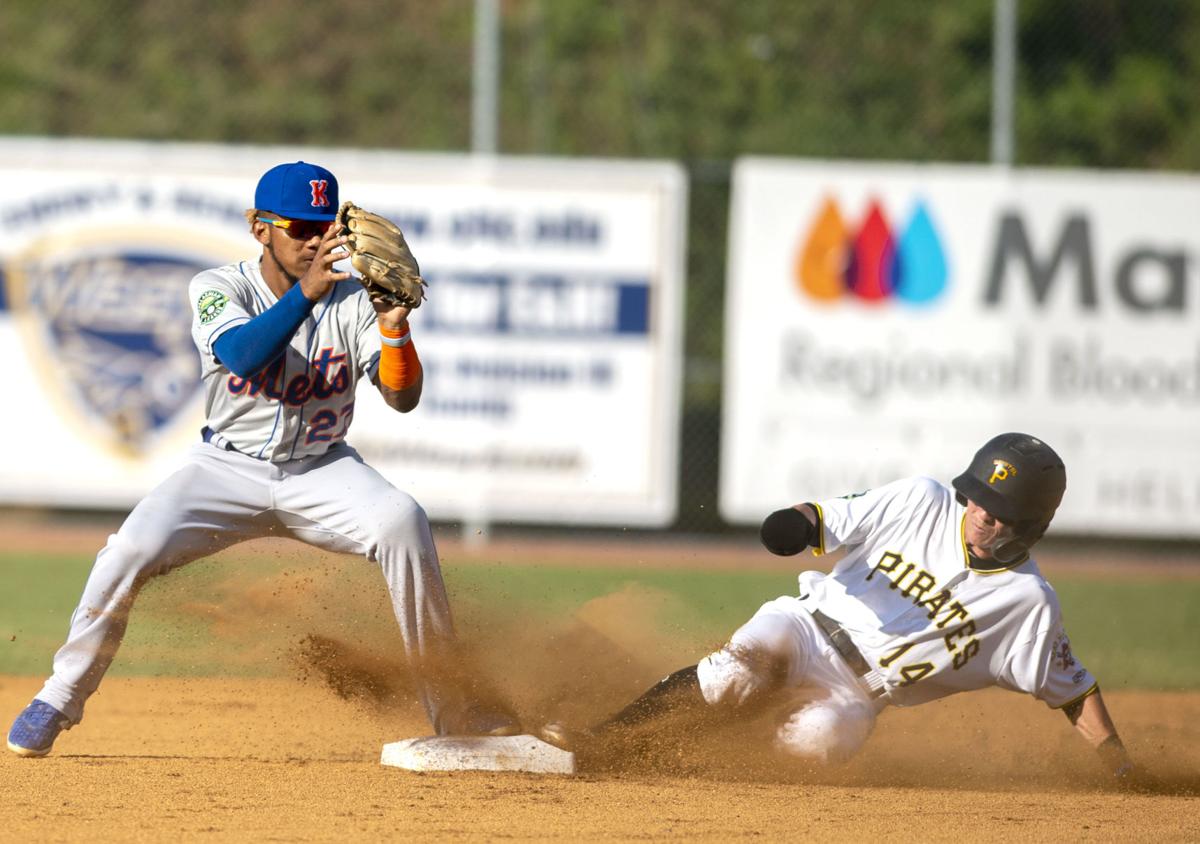 Kingsport's Gregory Guerrero takes the throw at 2nd base as Bristol Pirates's Josh Bissonette slides safely into the base to beat the force out. 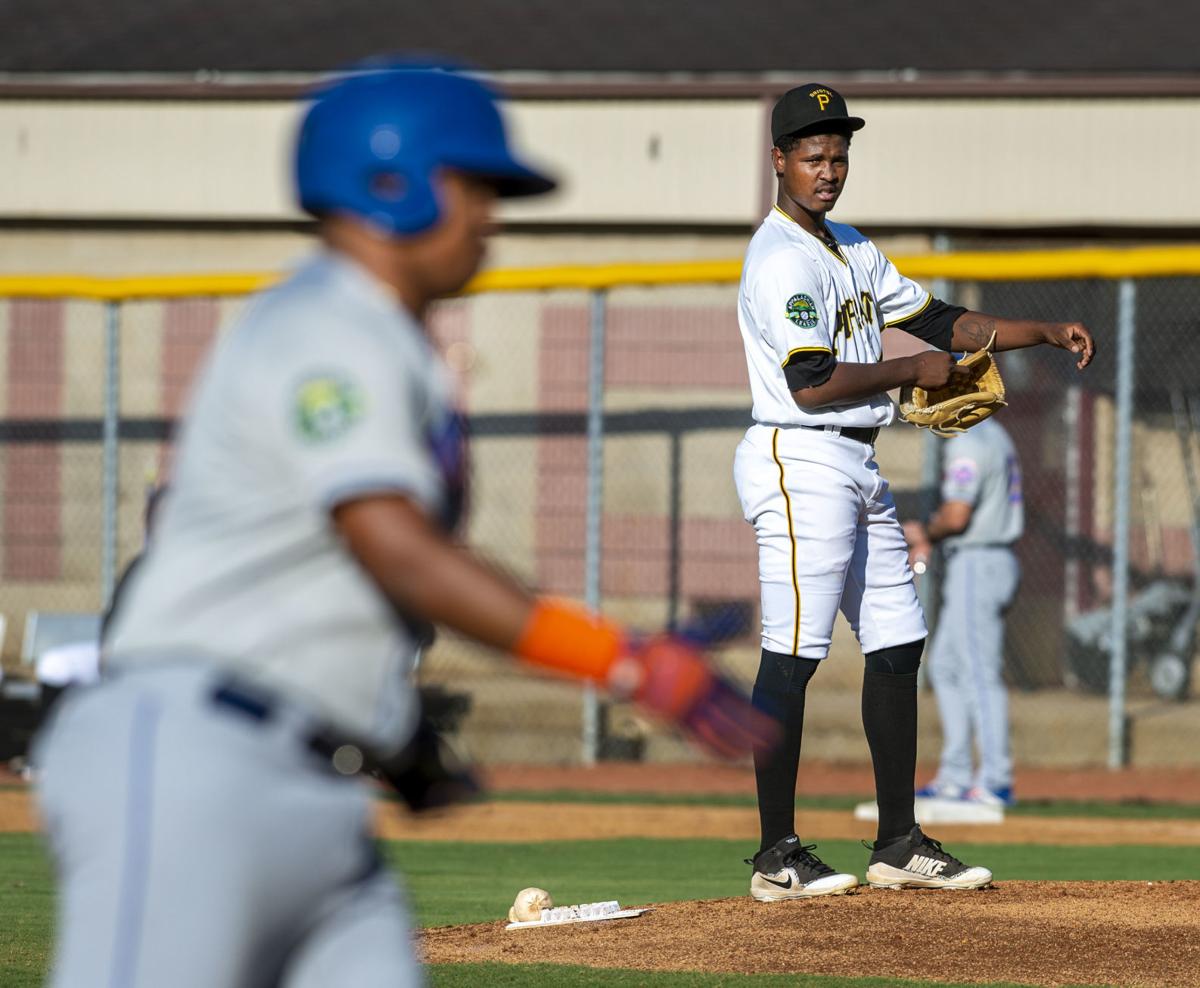 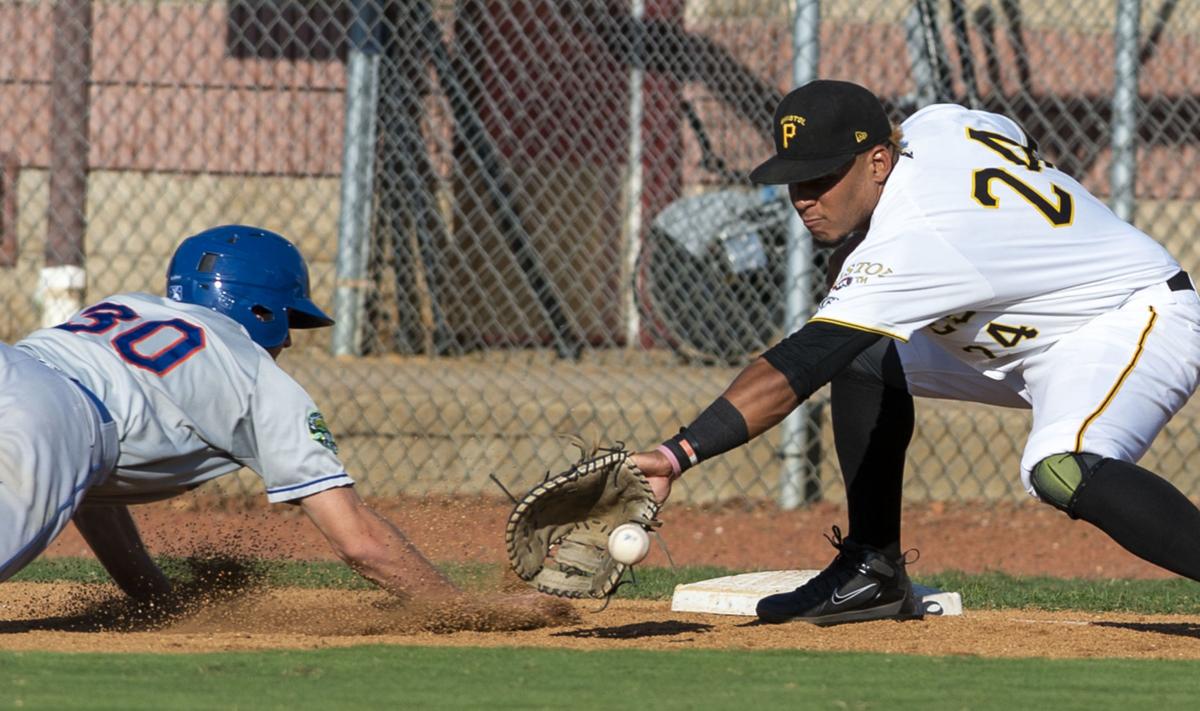 Bristol 1st baseman Samuel Inoa takes the pickoff throw as Kingsport's Tanner Murphy dives back to the base.

Bristol Pirates Aaron Shackelford connects on a pitch and hits it off the rightfield fence for an RBI double.

Kingsport's Gregory Guerrero takes the throw at 2nd base as Bristol Pirates's Josh Bissonette slides safely into the base to beat the force out.

Bristol 1st baseman Samuel Inoa takes the pickoff throw as Kingsport's Tanner Murphy dives back to the base.

BRISTOL, Va. – The Bristol Pirates and Kingsport Mets are both attempting to make a climb up the Appalachian League standings and Thursday night’s doubleheader between the two teams didn’t do much in giving either team a sturdy foothold.

Brett Baty’s one-out RBI single in the top of the seventh inning put the Mets ahead to stay in Kingsport’s 4-3 victory in the first game at DeVault Stadium, but Bristol’s Ethan Goforth pounded out three hits and drove in three runs as the Pirates salvaged a split with a resounding 10-2 triumph in the nightcap.

The BriBucs (23-25) sit in third place in the Appy League’s West Division, while Kingsport (23-26) is lurking close behind.

Both the Pirates and Mets are chasing Johnson City (26-22) and Elizabethon (25-23) for the top two spots and the playoff berths that go with that status.

Bristol has 19 games remaining to make a charge.

Bristol had to settle for a 1-1 record on Thursday and the opener had the feel of a postseason contest as it was well-played, well-pitched and evenly-matched.

“Both teams were battling,” Baty said.

Bristol couldn’t hold a 3-1 lead in the first game as Kingsport rallied and tied it on Baty’s fifth-inning RBI groundout.

Baty came up clutch again in the top of the seventh as he sent a 2-2 pitch from C.J. Dandeneau (1-2, 2.84 ERA) up the middle and Sebastian Espino scooted home from second base to put the Mets ahead.

The 19-year-old infielder had been 0-for-3 with three groundouts prior to his big knock.

“I was hitting it hard, just right at them,” said Baty, a first-round pick of the New York Mets in June’s Major League Baseball Amateur Draft. “I was just looking for something up and got it up and drove it up the middle.”

Leadoff hitter Jake Snider of Bristol reached on a single to start the bottom of the seventh inning, but was later thrown out while inexplicably trying to steal second base.

Kingsport pitcher Nick MacDonald (1-0, 2.84 ERA) struck out Aaron Shackelford – Bristol’s leader in home runs – with a runner on base to clinch the win for the Mets.

Bristol didn’t miss any opportunities of the second game, however.

Meanwhile, Yoelvis Reyes (3-1, 4.79 ERA) struck out six in five innings of four-hit ball to pick up the win on the mound.

“We came out and did what we needed to do that second game,” Goforth said. “We kind of refocused and got it done.”

NOTES: It was the first doubleheader of the season at home for the Pirates. The twinbill was made possible because Kingsport’s game at DeVault Stadium on July 22 was rained out. … Fernando Villegas is 2-for-8 in two games for the West Virginia Black Bears of the short-season advanced New York-Penn League. He was promoted from Bristol on Monday. … Kingsport committed a combined five errors in the two games. … A crowd of 225 took in the doubleheader. … Nick Leyva was among those in attendance and will be in town the next four days. He is a senior advisor of baseball operations for the Pittsburgh Pirates and managed the Bristol White Sox to the 2002 Appalachian League championship. … Bristol hosts Kingsport today at 6:30 p.m. Tahnaj Thomas (0-3, 3.68 ERA) makes his ninth start of the season for the BriBucs.