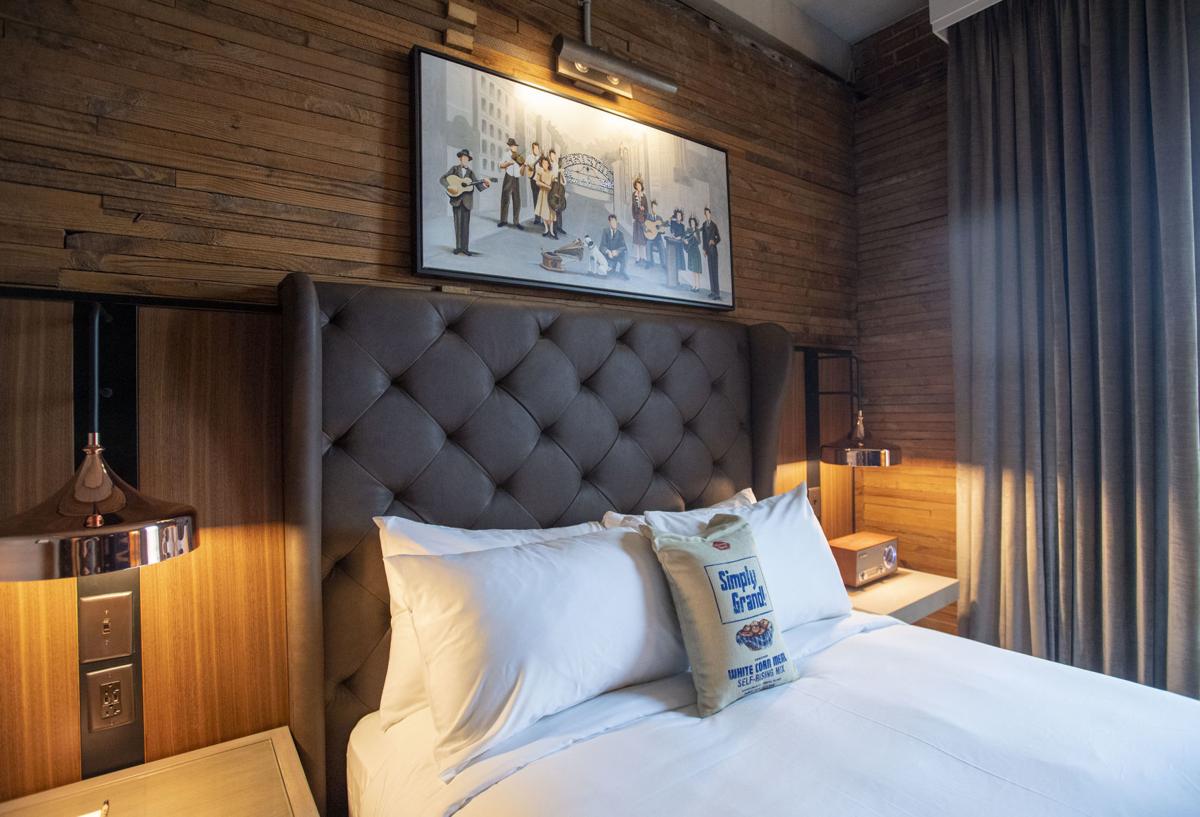 One of the Mill Suites at The Sessions Hotel in Bristol, Virginia. 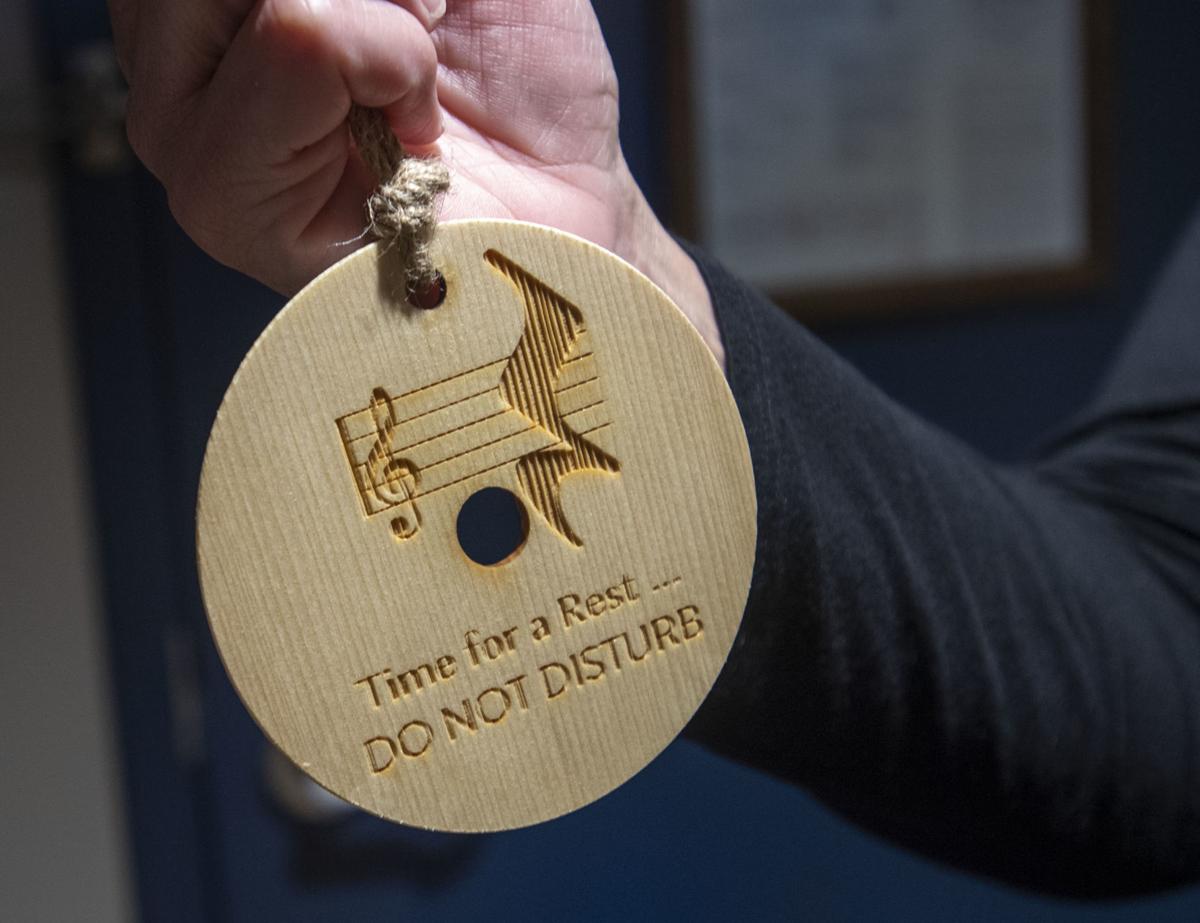 The "do not disturb" signs for each room are made from Gibson guitar circle cutouts and branded for The Session Hotel. 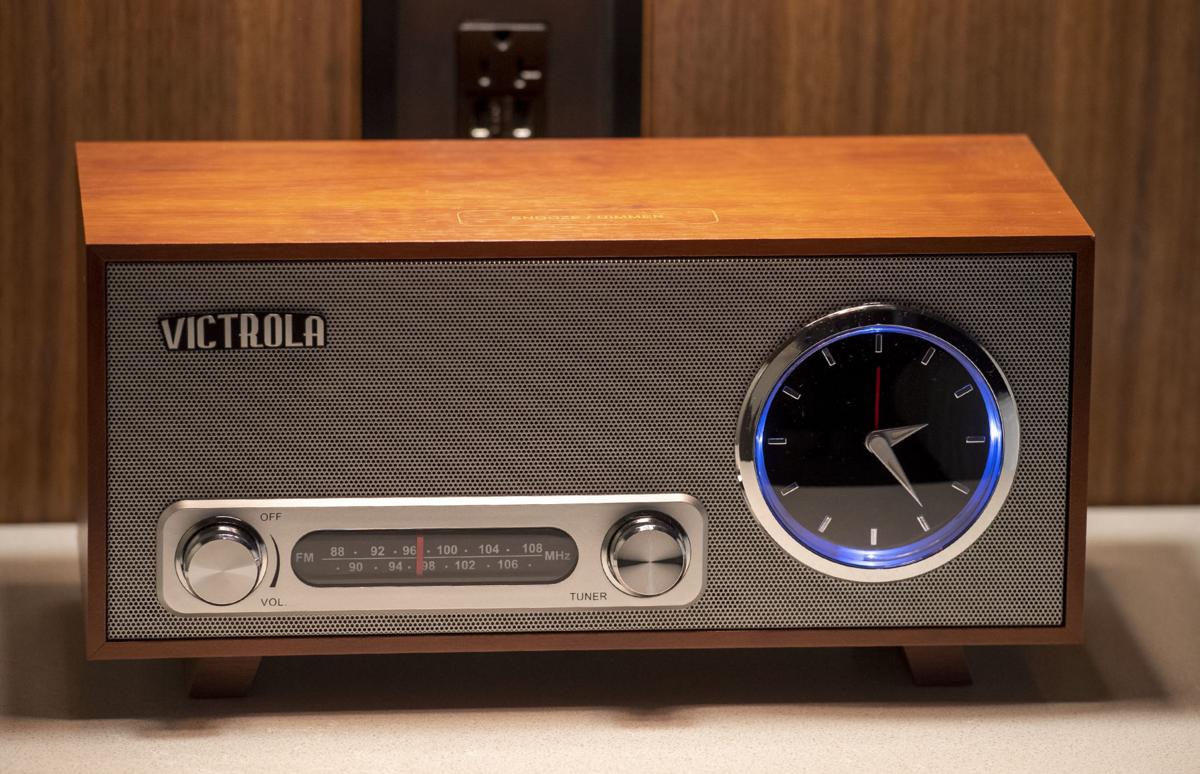 Replica Victrola radios are in each room at The Sessions Hotel and feature bluetooth to play the music from your own devices. 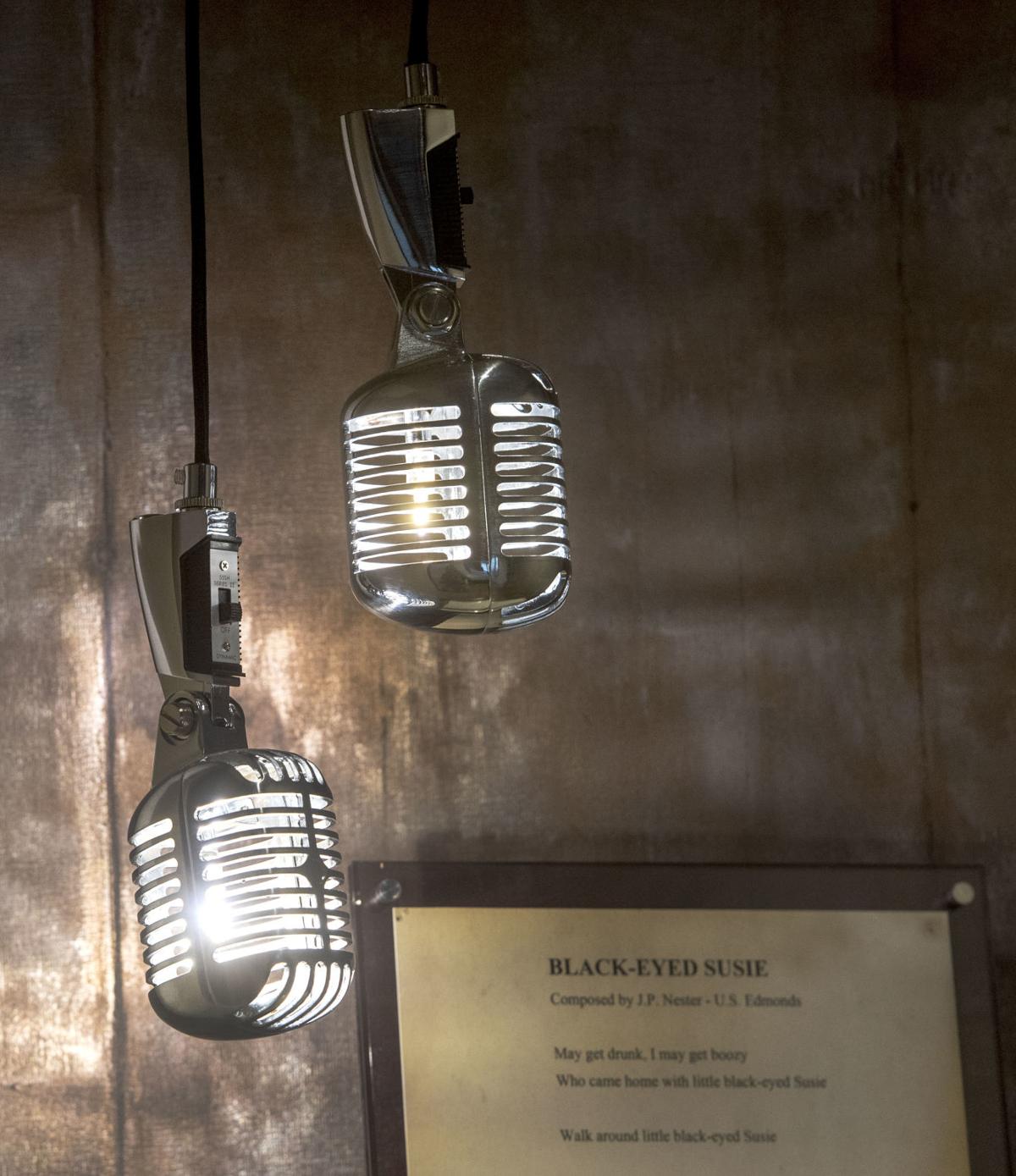 Microphone pendant lights hang in the "Black-Eyed Susie" room at The Sessions Hotel in Bristol, Virginia. 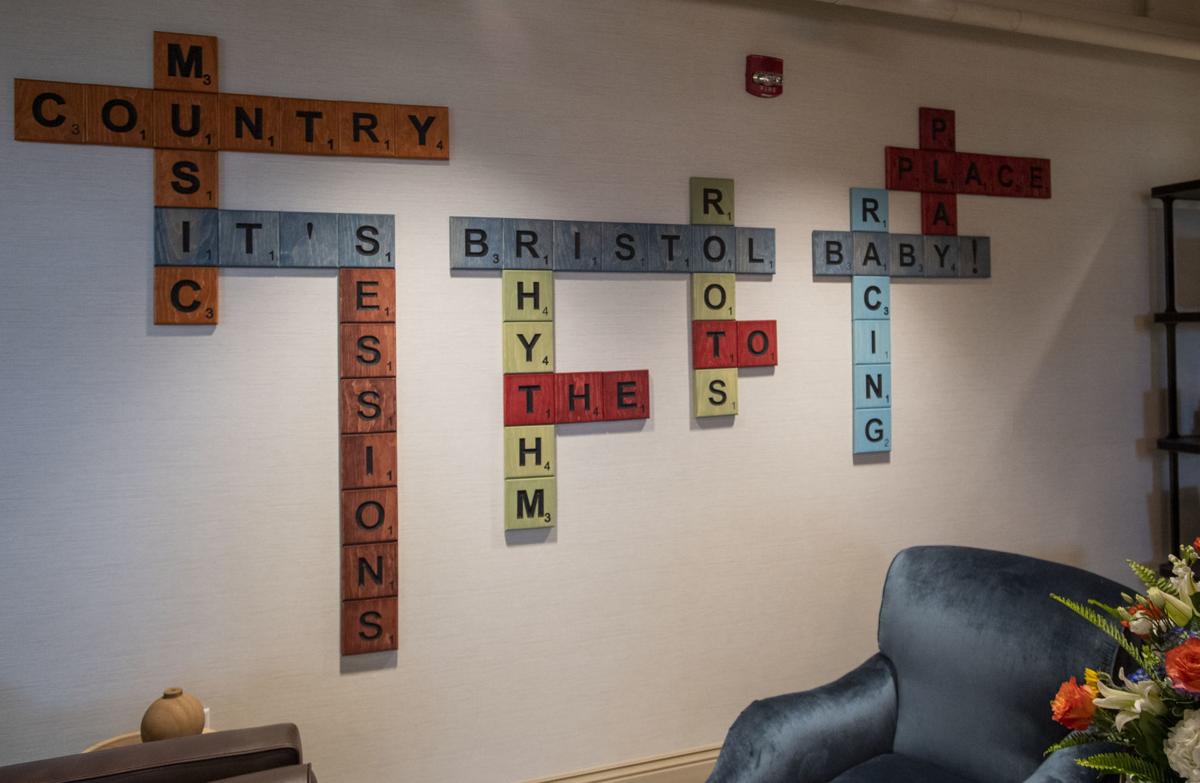 The lobby of the newly opened Sessions Hotel in Bristol, Virginia. 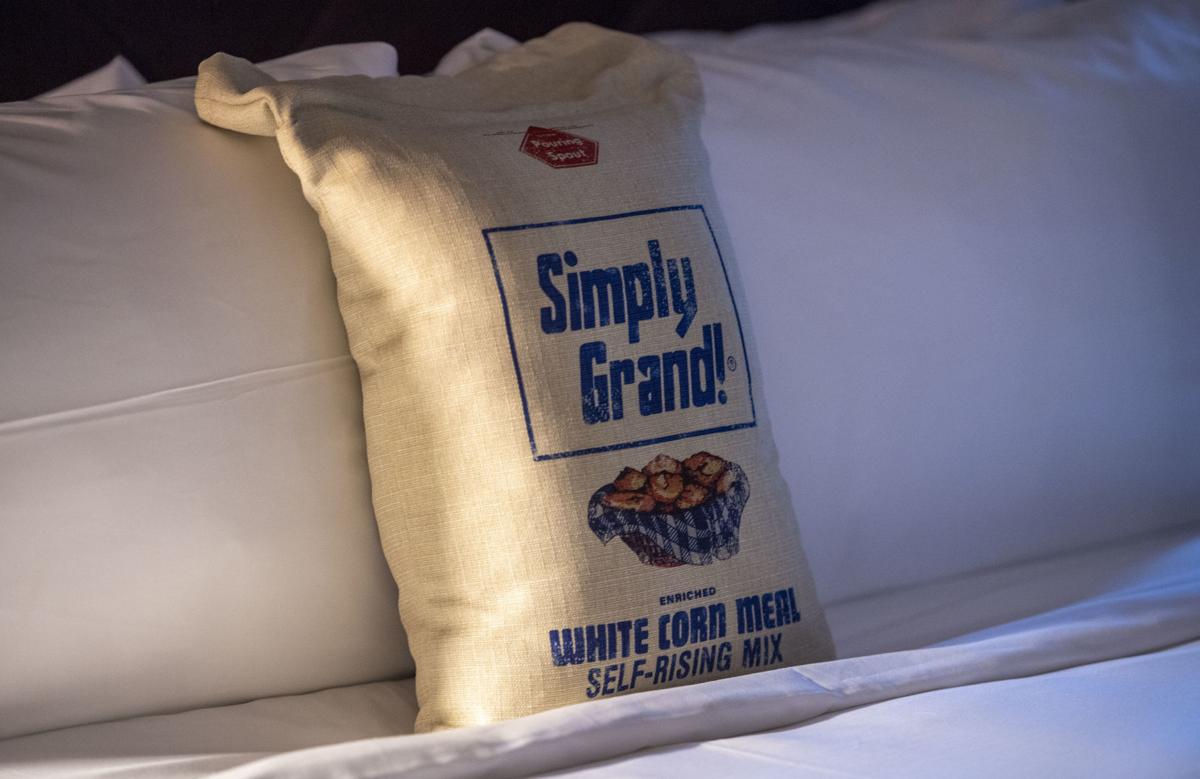 A pillow decorated to represent the former mill that part of the hotel is located in sits on one of the beds at The Sessions Hotel. 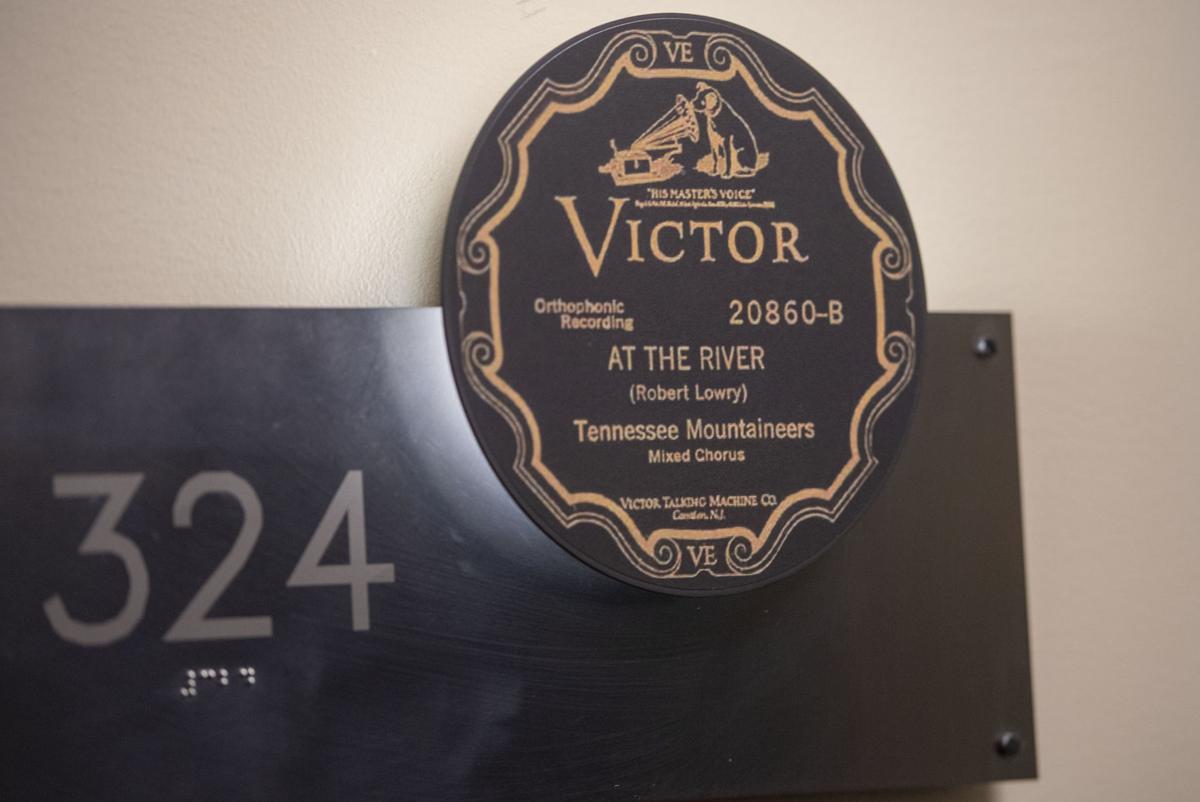 Each room at the new Sessions Hotel is individually branded with the name of a song. 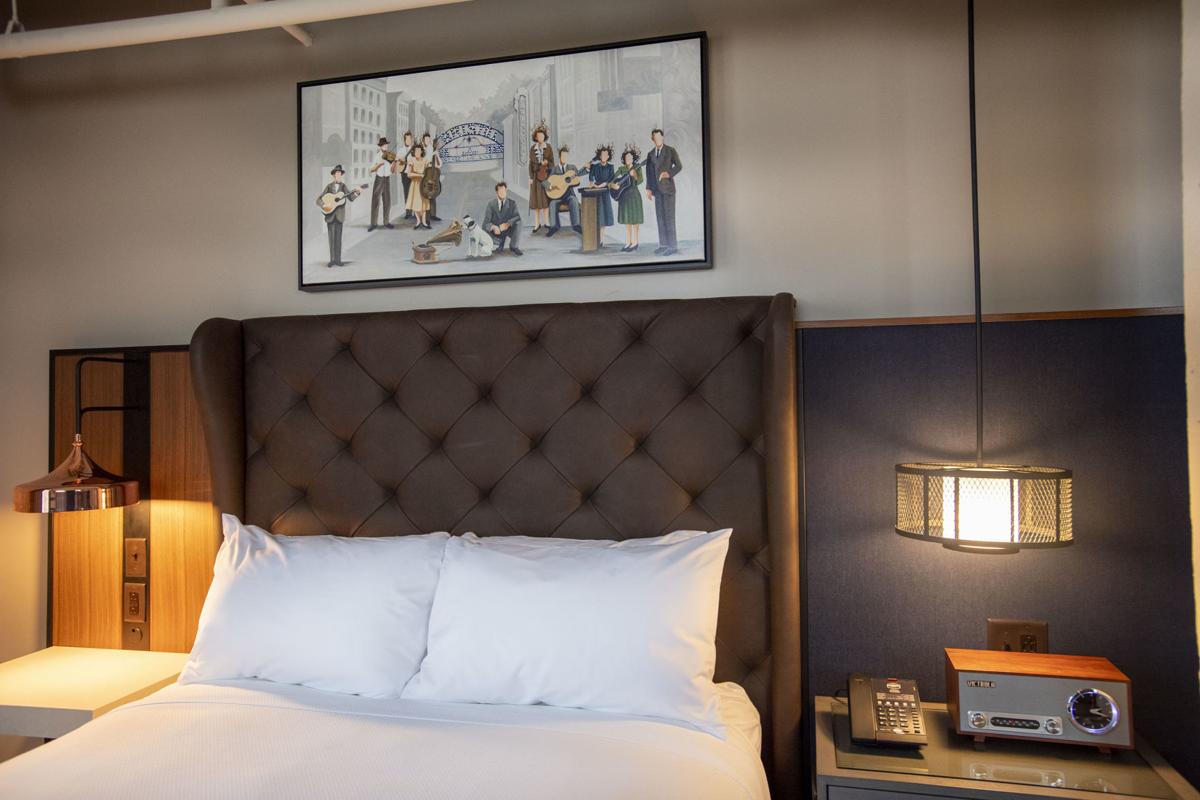 The Sessions Hotel formally opened for business on Monday. The hotel is part of the Marriott Tribute Portfolio group. 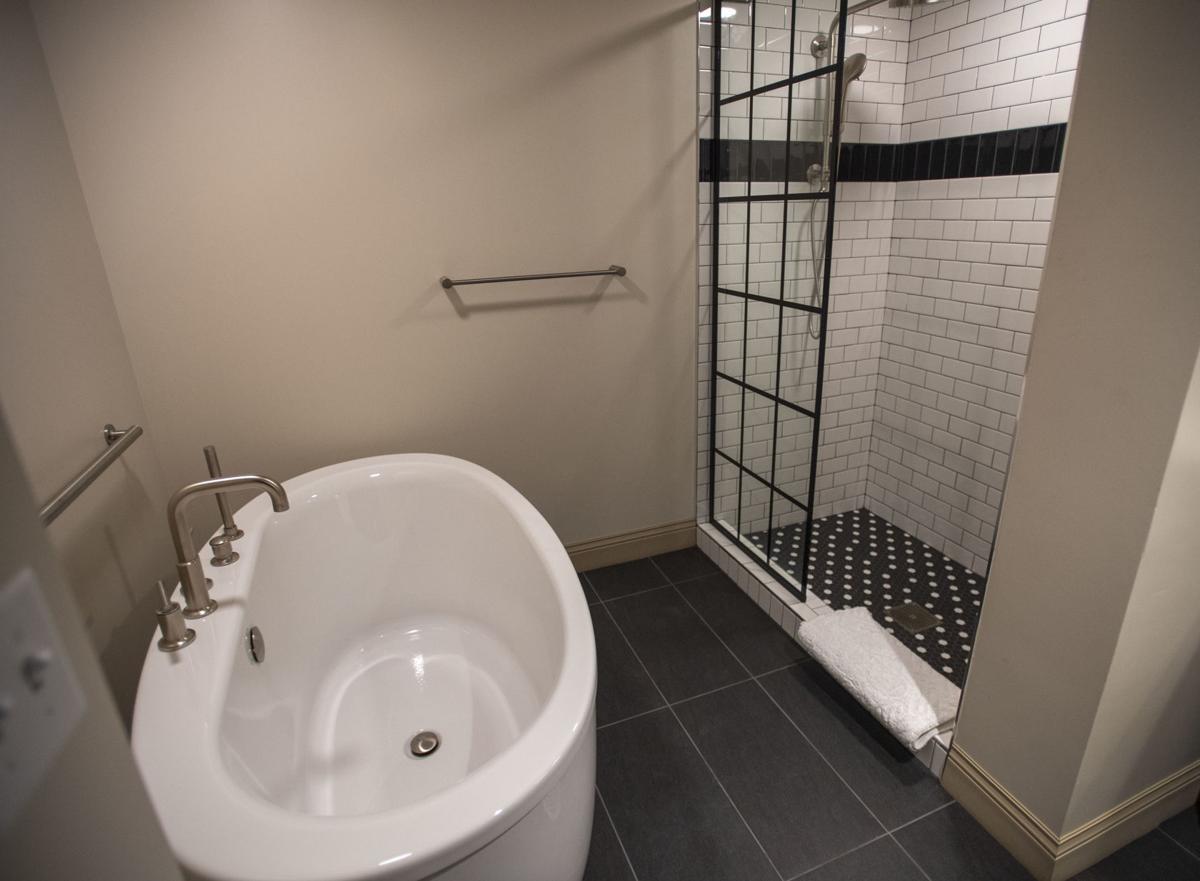 Some of the rooms at The Sessions Hotel feature a shower and a soaker tub.

The Sessions Hotel formally opened for business on Monday. The hotel is part of the Marriott Tribute Portfolio group.

BRISTOL, Va. — Music imagery and history oozes from every sparkling pore of The Sessions Hotel.

From vintage Victrola record player horns protruding from the wall behind the front desk to Victor-brand record label signs outside each room, turntables and radios found inside, lights resembling vintage microphones and round “do not disturb” signs cut out of Gibson acoustic guitars, The Sessions Hotel is singing Bristol’s song.

Located in State Street’s 800 block, the hotel property combines three century-old structures — the 1920’s Jobbers Candy Factory, the 1915 Bristol Grocery building and the 1922 Service Granary Mill — into a complex that also includes the recently opened Southern Craft restaurant and bar with other amenities.

The hotel is one of 52 worldwide member properties on four continents of the Marriott Tribute Portfolio group. Twenty of its 70 rooms were booked on opening night, development partner Kimberly Christner said Monday while leading the Bristol Herald Courier on a tour.

In addition to highlighting the history of its buildings, the hotel décor features “Moon Bound Girl” artwork depicting the Bristol Sessions by Twin City artist Leigh Ann Agee and blue denim accents from L.C. King Manufacturing. Hospitality centers in rooms are designed to resemble old record players, and some suites have turntables, with vinyl available upon request.

Nashville singer-songwriter Jim Lauderdale is involved and has agreed to help curate programming and some performances.

Previously scheduled to open in late March, the opening was put on hold due to the COVID-19 pandemic.

“When the coronavirus happened, we stopped doing what we were doing and came back at the end of May and took a month to get us back moving forward,” Christner said. “We feel like travel is coming back — leisure travel, destination travel by drive markets, and we’re in a drive market. The drive markets are doing well and starting to come back sooner than the big cities and the fly markets. We feel like Bristol is positioned for a faster comeback in the hospitality and travel business.”

The pandemic will initially impact in-room amenities, Christner said. Items including guest bath robes, decorator pillows, umbrellas, ice buckets and coffee are not in the guest rooms but are available by request due to COVID-19 concerns.

Many high-touch surfaces, including door handles and elevator control panels, use NanoSeptic self-cleaning technology, she said.

The project was a collaboration of Creative Boutique Hotels, which includes Todd Morgan and Mike Cagle, owners of MB Contractors; Christner, president and CEO of Cornerstone Hospitality; and retired architect and developer Hal Craddock of Lynchburg.

“As an adaptive reuse project and boutique hotel, the property has taken time for us to complete,” Christner said. “We’ve taken our time, and, as such, we’ve perfected the overall guest experience with curated art, repurposed items from the buildings into functional pieces, designed creative and high-end amenities that serve to add to the overall experience and tells the story of the buildings and Bristol.”

It was originally announced in December 2013 and has taken more than six years to complete.

“We’ve actually been working in some capacity on this project since 2014. As with all projects of this size and complexity, working through the Historic Preservation Trust at the state and federal level and ensuring that we comply with all rules on four different buildings takes time,” Morgan said in a written statement. “We have redesigned it many times to get it perfect as a result. In the end, it’s absolutely stunning and a real showstopper for the Bristol community, Southwest Virginia and Eastern Tennessee. We’ve made sure to maintain authenticity through all of the spaces in the buildings.”