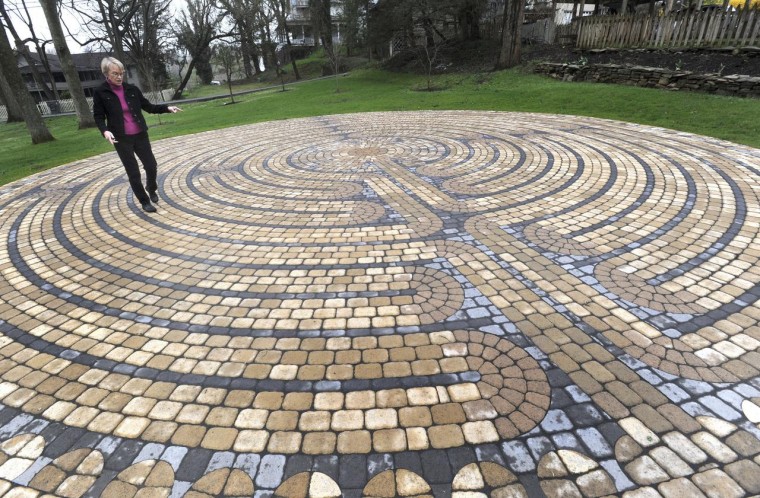 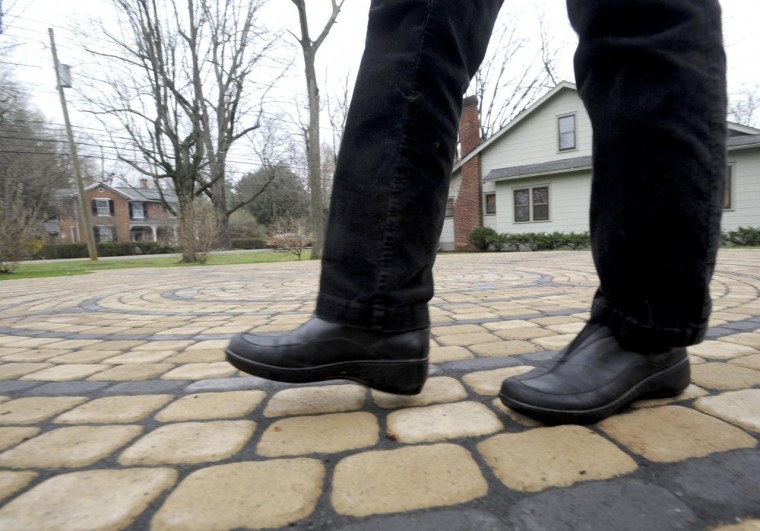 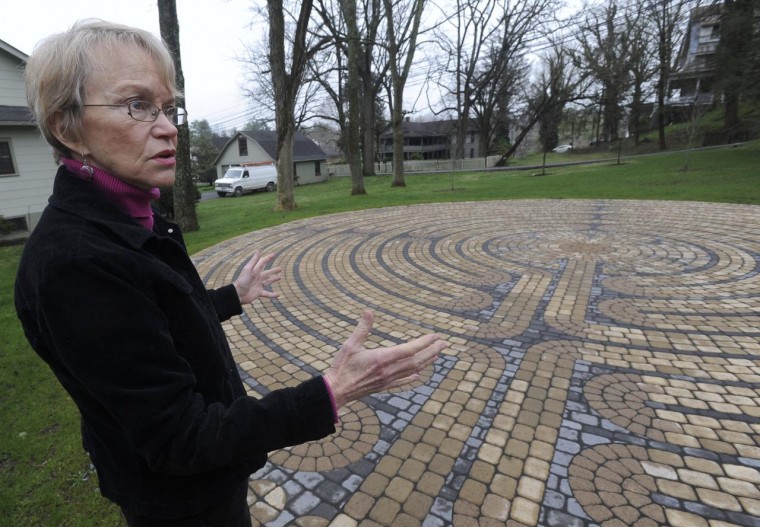 DAVID CRIGGER/BRISTOL HERALD COURIER - Jan Hurt talks about the labyrinth that she and her husband built across the street from their Abingdon home.

DAVID CRIGGER/BRISTOL HERALD COURIER - Jan Hurt talks about the labyrinth that she and her husband built across the street from their Abingdon home.

The light brown bricks meander back and forth for three-quarters of a mile, said Jan Hurt, owner of the labyrinth.

It’s hard to imagine the path is that long, as it winds through a 40-foot-wide round, brick patio-like structure on the lot across from her Valley Street home, but that’s part of the beauty of it.

The purpose of walking it is not to reach a physical destination, but a spiritual one.

“We want people to walk it,” said Hurt, who explained that although the labyrinth is privately owned and on private land, it’s open to the public at all times. “That’s why we built it.”

A 91 percent scale replica of a labyrinth on the floor of Chartres Cathedral in France, it is entitled All Shall Be Well.

“Ninety-one is some sort of mystical geometric number,” explained Hurt, who described the intricate pattern as “compulsive geometry.”

“What I don’t know is how anyone can draw this and come up with this pattern,” she marveled, as she began to walk a section of it, following the brick pattern up and back and around.

It’s one of three labyrinths that now exist in Abingdon, said Garrett Jackson, the town’s planning director. The others are on the grounds of Christ the King Catholic Church and Virginia Highlands Community College.

The town plans to build a fourth labyrinth, with an eternal flame in the center, at the Veterans’ Memorial Park.

“I’ve always liked when I visited cities that have these things, especially in Europe,” said Jackson, who said he likes the idea of “planning the physical design of spaces but also having spiritual meaning in them.”

He said the town’s labyrinth will likely be modeled after a design used in Medieval Abingdon, England.

“I think it’s just a new way of looking at spirituality,” Jackson said, explaining that there’s been a resurgence of interest in ancient things. “It’s an archaic or ancient use of spirituality, the labyrinth, to represent the journey of life, and also a pathway to meditation, to contemplative life.”

Hurt said she too has walked labyrinths in other places. But the one she had built in Abingdon began as a vivid dream. She told her husband, Sam, the next day that the dream was so vivid she was surprised she wasn’t working on it already.

“Well, maybe I will, but where would we put it?” she remembers asking him. “In the lot, of course,” was his reply.

Retired from the oil business in Texas, the Hurts bought their historic brick house in Abingdon more than a decade ago. When the property across the street – a house and a lot – went up for auction, they bought it to protect the view.

They always wanted to keep the land as open space. Choosing a labyrinth for the space, Hurt said, “really was an impulse.”

The labyrinth was assembled by their landscaper from a kit bought online from The Labyrinth Company, which specializes in making them. According to the site, the kit retails for $27,900.

Jackson said the placement of a labyrinth on that particular site has a good connection to the historical use of the property.

The property once belonged to a Swedenborgian church, he said in a paper written for the labyrinth’s public dedication this month, a Christian congregation that followed the teachings of 17th-century Swedish mystic Emmanuel Swedenborg.

There might have been a meditation garden on the spot where the labyrinth is now located, and Swedenborg himself had a labyrinth on his estate.

Hurt said there are several ways to use a labyrinth.

She said at some point there will be signage and benches along with the labyrinth, but that’s still in the planning stage.

One more thing, Hurt said: a labyrinth is different from a maze.

“There’s a clear path in and a clear path out,” she explained. “The idea of a maze is to make you get lost. And I think the idea of a labyrinth is to help you find yourself or find a point.”