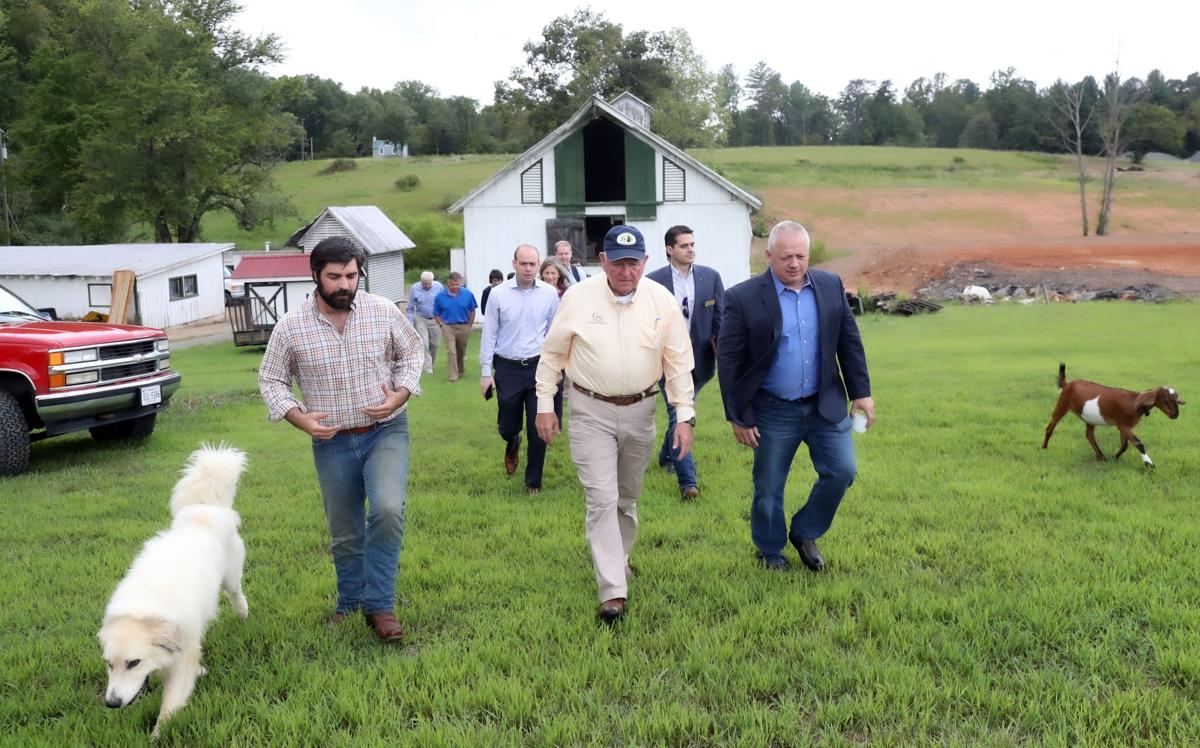 ABOVE: Roslyn Farm owner Richard Fox (from left) gives a tour to U.S. Secretary of Agriculture Sonny Perdue and Rep. Denver Riggleman, R-5th. BELOW: Perdue speaks during a roundtable at Roslyn Farm in Albemarle County on Monday. Find more photos at DailyProgress.com. 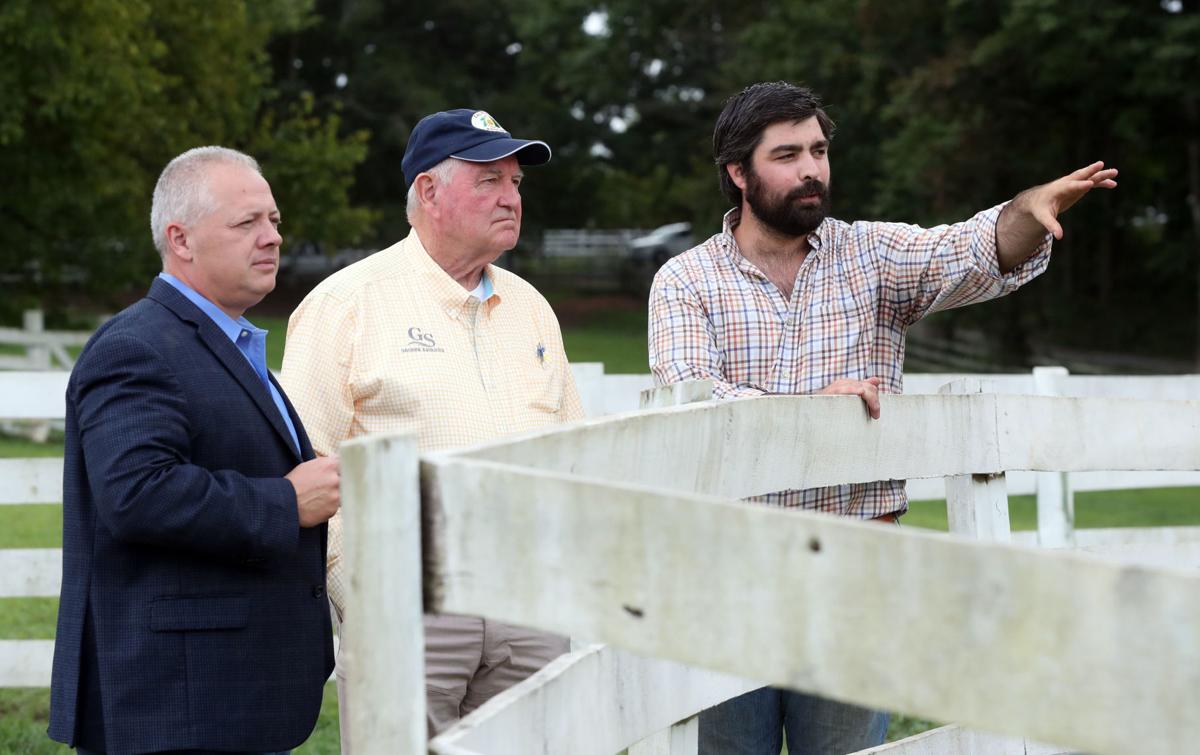 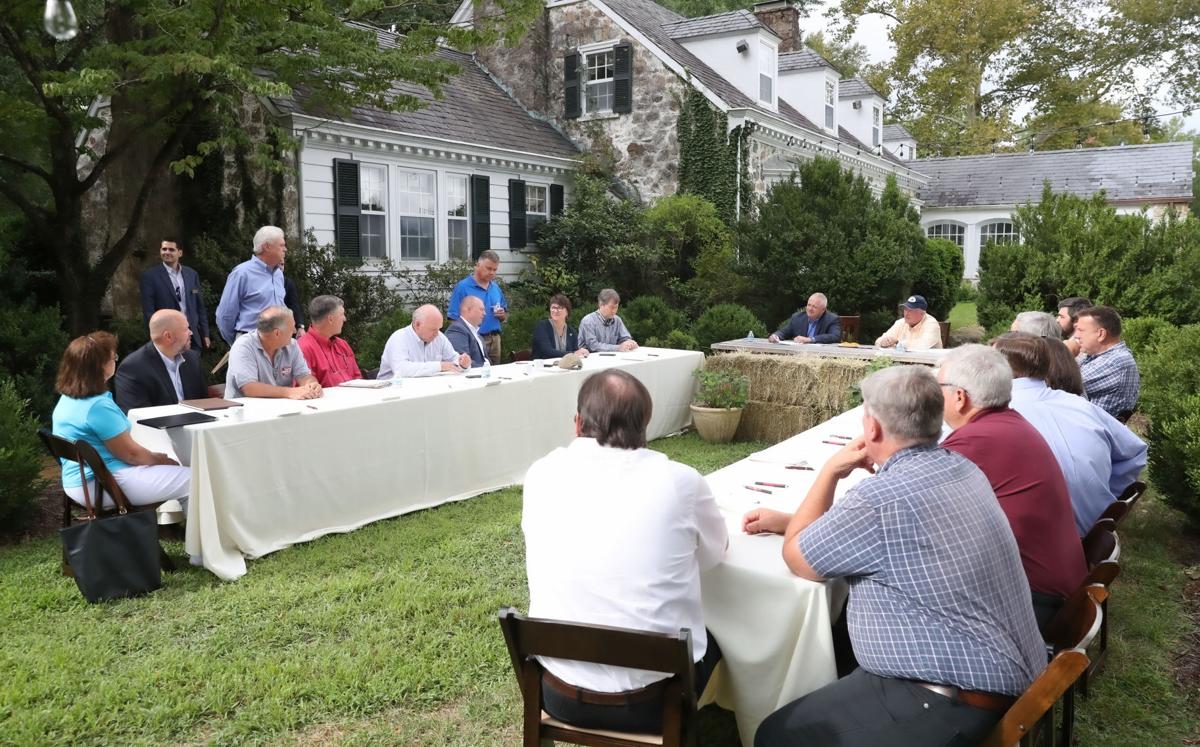 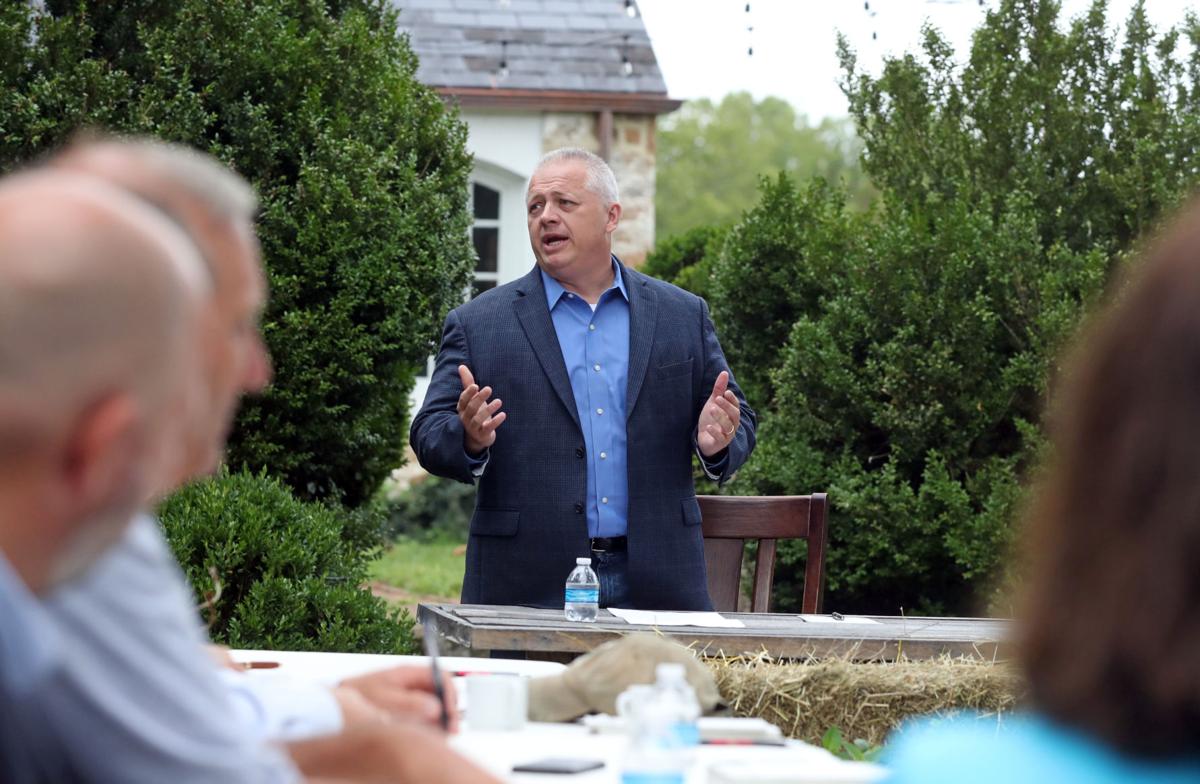 ABOVE: Roslyn Farm owner Richard Fox (from left) gives a tour to U.S. Secretary of Agriculture Sonny Perdue and Rep. Denver Riggleman, R-5th. BELOW: Perdue speaks during a roundtable at Roslyn Farm in Albemarle County on Monday. Find more photos at DailyProgress.com.

Farmers from across Virginia’s 5th Congressional District met with U.S. Secretary of Agriculture Sonny Perdue in Albemarle County to discuss agriculture issues, such as labor, hemp farming and various regulations.

Rep. Denver Riggleman, the district’s congressman, and Perdue toured Roslyn Farm — owned by fellow Republican Richard Fox, a former candidate for the 25th House District, and his fiancée Alexia Richards — ahead of a roundtable discussion on Monday morning.

“I don’t have a silver bullet coming from D.C.,” Perdue said. “I’m not going to say, ‘I’m here from the government, I’m here to help you,’ or that kind of thing. I’m here to listen.”

Tobacco farmer Jim Jennings, who also serves as a Mecklenburg County supervisor, said he was concerned about the rising costs of labor hired through the H-2A program.

The program is designed to allow agricultural employers who anticipate a shortage of domestic workers to bring foreign workers to the United States to perform agricultural labor or other temporary or seasonal services.

The employer must file an application with the Department of Labor stating that there are not sufficient workers in the U.S. who are able, willing, qualified and available to do the work. They must have initially attempted to find American citizens to fill these jobs.

Employers pay the workers a wage known as the Adverse Effect Wage Rate, which is currently $12.25 in Virginia.

“Any relief we can get to help this,” Jennings said. “These are good people. They come up here legally, work here, don’t cause any problems, don’t get in trouble. I’ve got a man who’s worked for me for 30 years, they’re like family.”

“It’s a really good program, but we’re just getting completed strapped down with that wage rate,” he said.

Jim Saunders, with Saunders Brothers in Nelson County, said they have identified labor as the top threat to the growth and success of their business.

He said he would like to see the H-2A program move to the Department of Agriculture.

“The Department of Labor, in all their good senses, does not understand what we’re facing out here in agriculture, and the agriculture department does,” Saunders said.

Perdue said it was a huge issue that the department was making small strides on, and that the Adverse Effect Wage Rate has become the “perverse wage rate.”

“I think it’s going to have to be in a comprehensive immigration bill that has enough for everybody, that addresses enough issues,” he said.

Another farmer asked about crop insurance for hemp, and Perdue said statistical studies still need to be done.

“[As] an insurance company, you’ve got to assess the risks, and with a newer crop like hemp, we don’t know production practices, we don’t know where to insure them,” he said.

“We will be working on the data as quickly as possible to get a hemp-specific [policy], just like we have for other crops,” Perdue said.

Later, when asked about rising import taxes and the retaliation effect on the agricultural sector, Perdue said that people like to point to one single cause when farming has been tough.

“The tariffs are not the single cause of economic duress on the farmers today — they’ve contributed, no doubt about it — but prices have been going down since 2012, and what we do need is more trade,” Perdue said. “I think the president is committed to that. He’s also committed to make sure that our trading partners play fair, play free and reciprocate trade efforts.”

Riggleman said the roundtable also served as a kickoff to a 5th District agriculture advisory committee, which he would like to have meet quarterly.

In each agricultural roundtable he’s held in the district, Riggleman said he has heard about the United States-Mexico-Canada Agreement, labor and government regulations.

“Right now, we are losing population or flatlining in the southern counties, while agriculture production needs ... go up, so we have labor issues,” he said.

Riggleman said streamlining immigration is important for farmers, as well as getting nonimmigrant workers.

“This is my priority because we are still an agricultural and rural district,” he said.