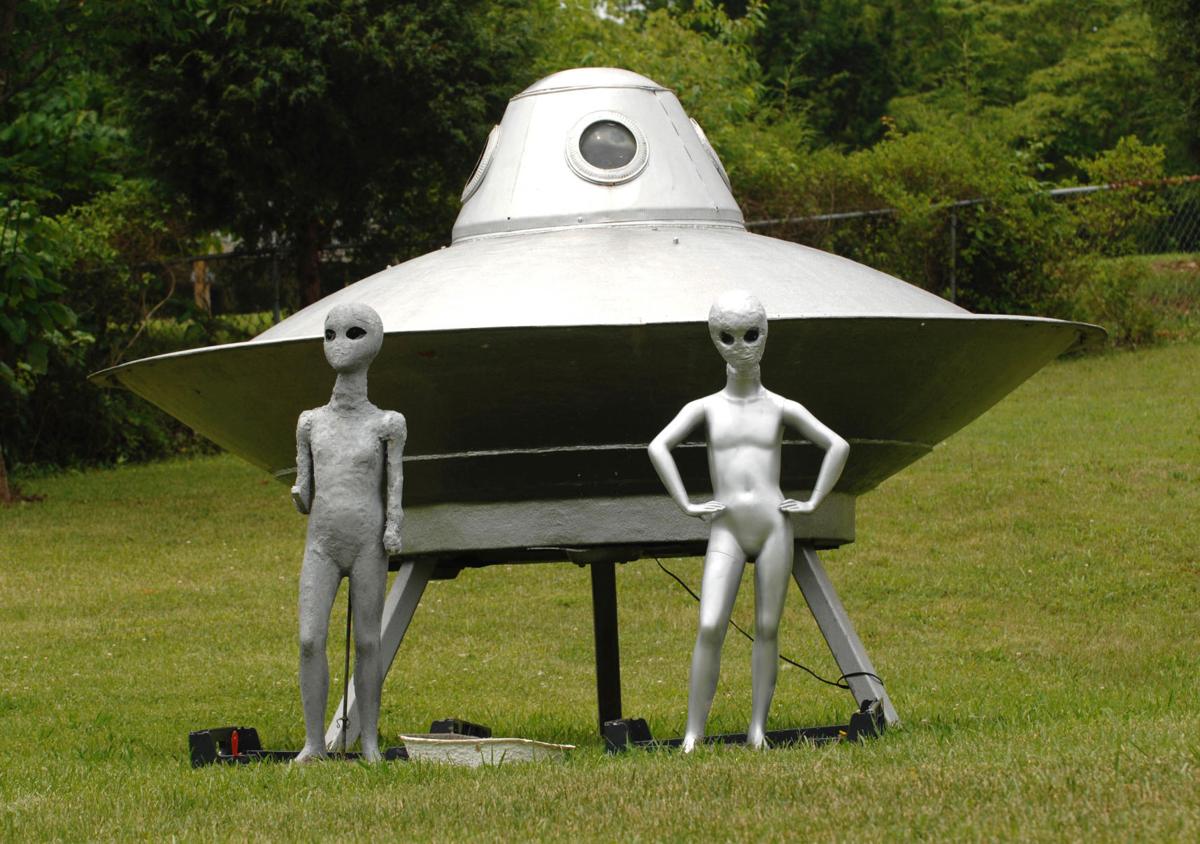 A UFO and two aliens — pictured above in 2009 — continue to rest in Gail Gooke’s front yard in Blountville as they have for nearly 40 years, though the aliens have weathered a bit and one has lost its head 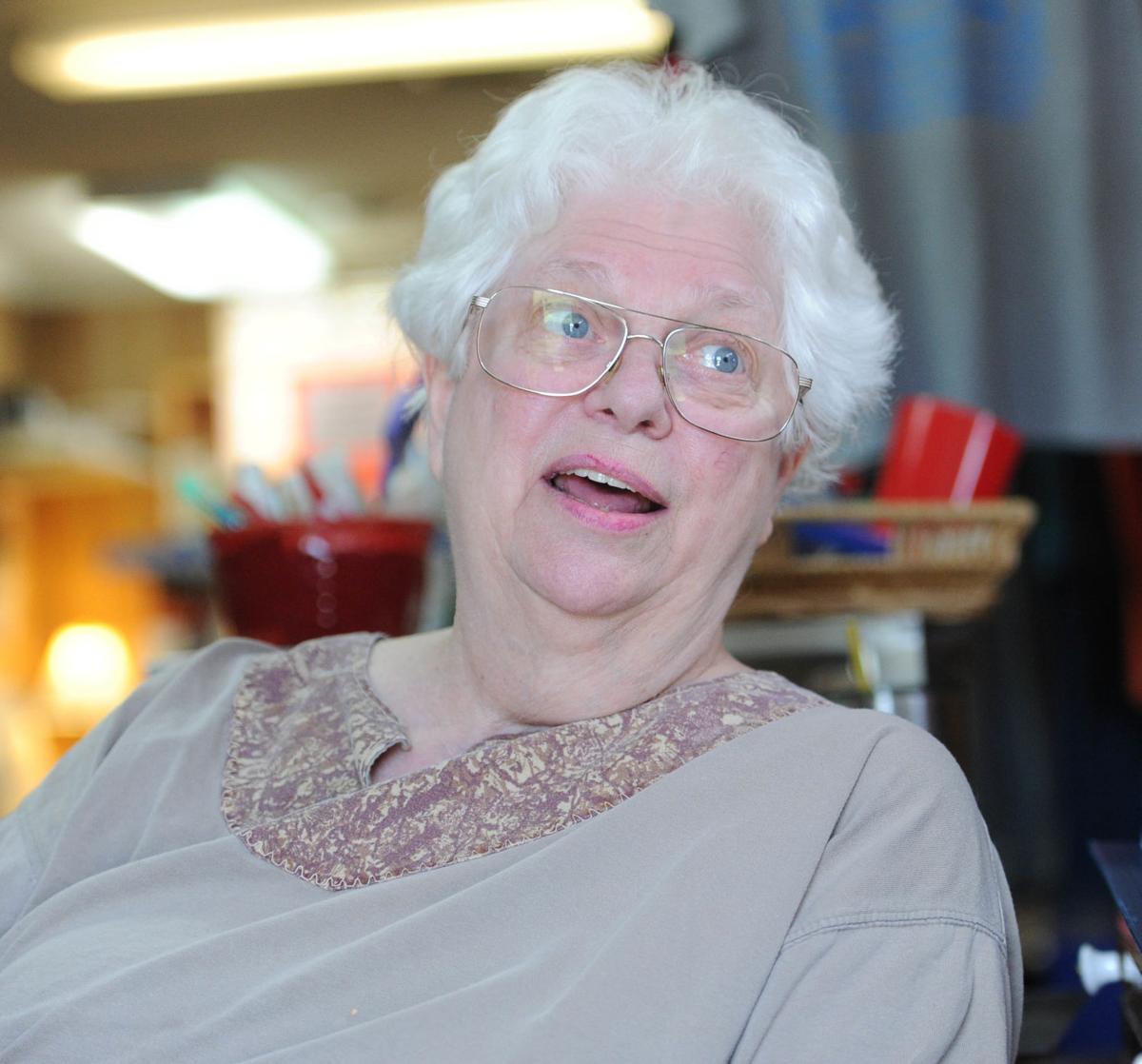 Gail Cooke talks about the flying saucer in her front yard in Blountville, Tennessee. Her late husband, Bruce, built the saucer by attaching two satellite dishes and attaching legs. The addition of the aliens made the scene complete. 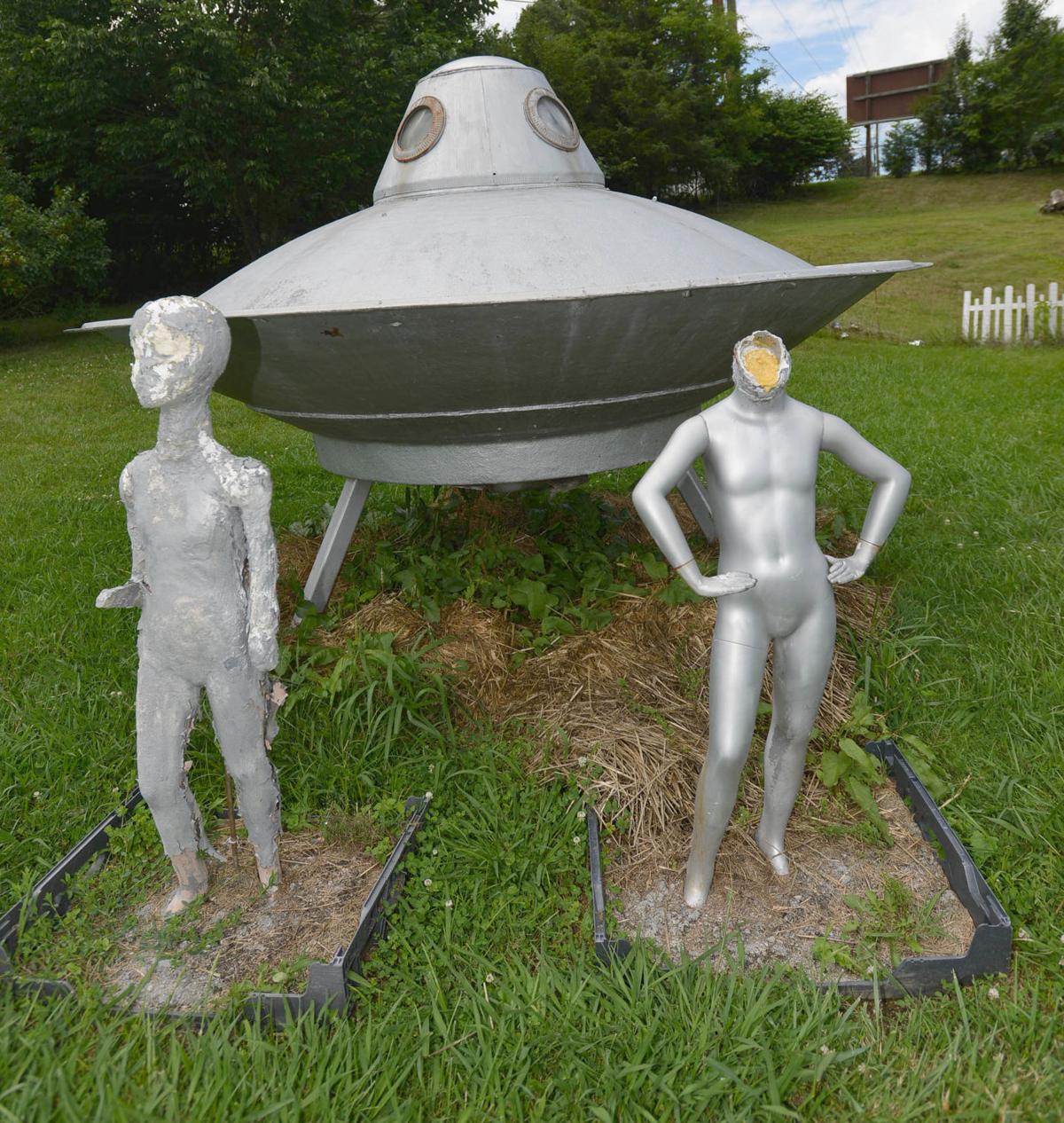 The UFO and the aliens in the yard of Gail Cooke have seen better days with effects of weather. The scene is photographed several times a week by passers-by and those who seek out the location. 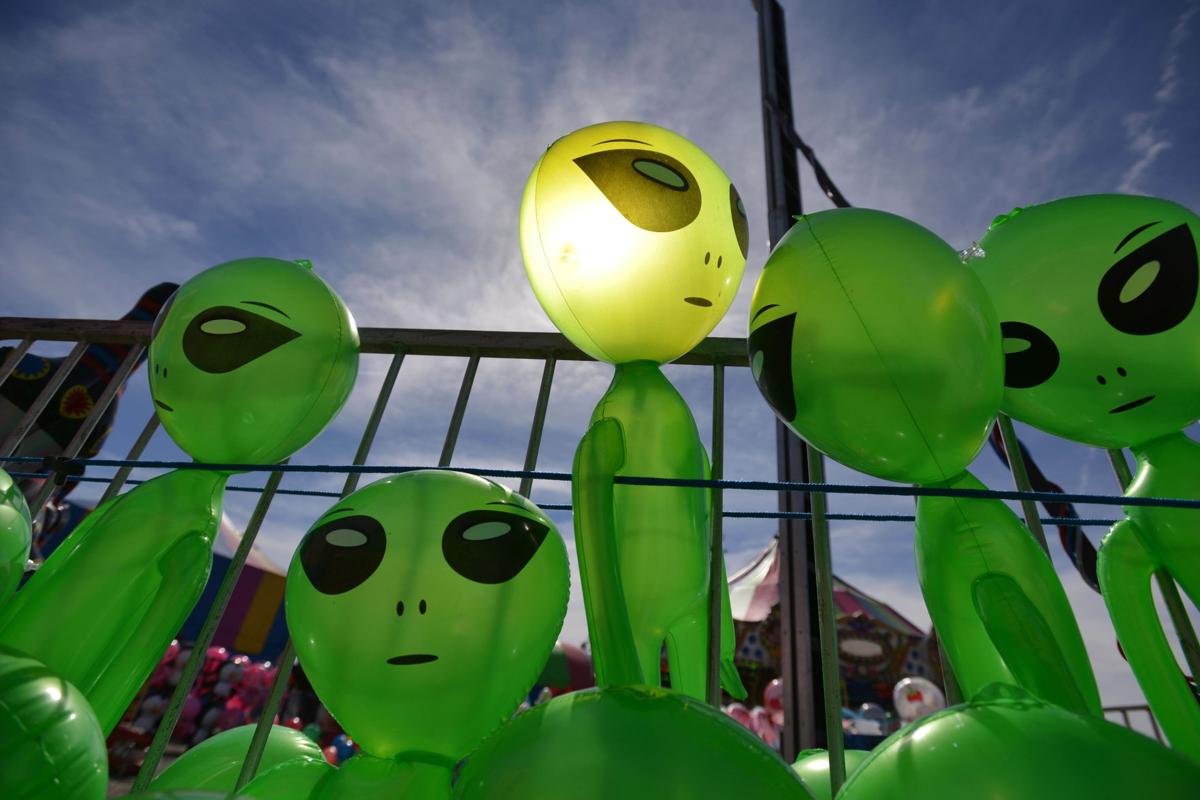 Inflated aliens sun themselves at the Washington County Fair in Abingdon, Virginia. 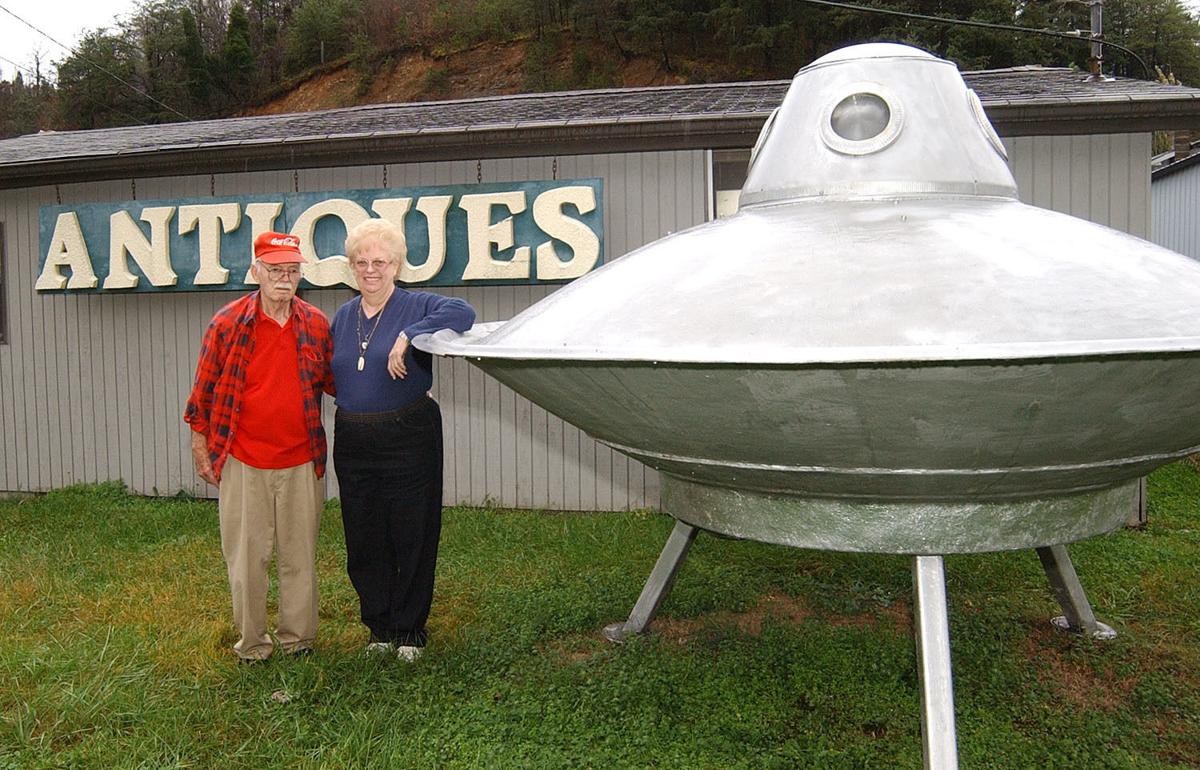 Gail Cooke and her late husband, Bruce, stand next to the flying saucer in Blountville, Tennessee, in 2003. Bruce built the saucer by attaching two satellite dishes and attaching legs. 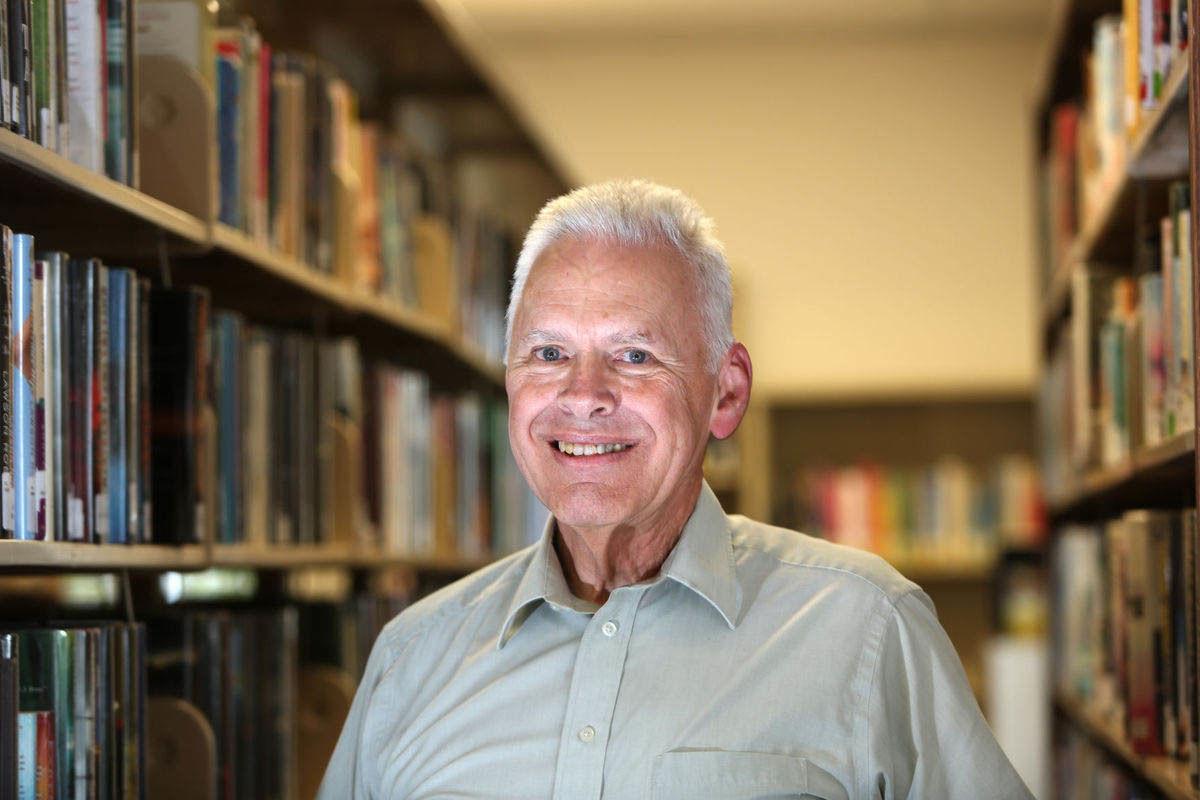 Paul Dellinger, who retired from The Roanoke Times in 2007. Dellinger covered some of the 1987 UFO sightings in Wytheville, Virginia.

A UFO and two aliens — pictured above in 2009 — continue to rest in Gail Gooke’s front yard in Blountville as they have for nearly 40 years, though the aliens have weathered a bit and one has lost its head

Gail Cooke talks about the flying saucer in her front yard in Blountville, Tennessee. Her late husband, Bruce, built the saucer by attaching two satellite dishes and attaching legs. The addition of the aliens made the scene complete.

Gail Cooke and her late husband, Bruce, stand next to the flying saucer in Blountville, Tennessee, in 2003. Bruce built the saucer by attaching two satellite dishes and attaching legs.

On a July night last summer, after watching the Elizabethton Twins beat the Bristol Pirates 6-3, a man in Bristol, Tennessee, reported seeing a slow-moving red orb floating above Volunteer Parkway, making its way northeast toward Walmart.

The man was walking his dog after the game and saw the orb coming toward his house, located just behind the store.

“I ran inside the house to get my girlfriend so that she could also see it as it passed over,” the man told the Davenport, Washington-based National UFO Reporting Center, which doesn’t release the identity of those who report UFO sightings. “As I came back outside, I observed [the orb] traveling at a high rate of speed, heading southeast … as it became a small dot and went out of sight.”

Such close encounters of the third kind have popped up from time to time in the Mountain Empire. In the Tri-Cities area, at least 26 unidentified flying objects have been reported to the National UFO Reporting Center since 2015, according to the center’s reporting database.

This week marks the 70th anniversary of the Roswell, New Mexico, UFO incident, when an “unidentified object” crashed on a ranch northwest of the city. Air Force officials at the time claimed it was a weather balloon. In the 1990s, the U.S. military revealed it involved a top-secret atomic espionage project called Project Mogul.

Alternate theories about the event have shrouded it ever since the crash.

This fall will be the 30th anniversary of the wave of UFO sightings near Wytheville, Virginia, in 1987, when scores of people reported various strange lights in the sky.

So, is there truth to these extraterrestrial tales? You’ll have to decide. Come along for the ride anyway. It’ll be out of this world.

‘Strange lights in the sky’

After Wythe County Sheriff Wayne Pike told the public in October 1987 that four of his deputies, including some with military experience, had witnessed a UFO, the floodgates were open.

Do you believe in alien UFOs?

In the following months and well into 1988, a wave of people reported seeing strange lights and objects in the sky.

Danny Gordon, then the news director of radio station WYVE, also reported seeing a strange craft. A news conference in mid-October drew national attention and by the following year, Gordon personally received more than 3,000 reports, according to news reports.

Paul Dellinger worked as a reporter for The Roanoke Times for more than 40 years, covering counties in Southwest Virginia out of the paper’s Wytheville office. After Gordon’s first radio story, Dellinger began reporting the events, like when Sheriff Pike said some of his deputies saw strange objects in the sky.

“All of a sudden, everybody started seeing things,” Dellinger said.

Gordon and Dellinger started working together. Gordon had people who claimed to have witnessed UFOs on his radio show. Dellinger was there to take notes.

Dellinger said there were “some strange lights in the sky.” He even saw something odd one night.

“I was driving home at night and saw a light down at end of our road that looked like a streetlight, but like a scintillating light,” he said.

Dellinger said the light came down very slowly over the road and moved at the speed of a balloon. He also described hearing a very quiet motor.

The Wytheville hype gained national attention. Dellinger said a reporter from the National Inquirer came to look into the reports, but left without a story.

Despite his own experience, Dellinger said he’s not sure anyone saw actual UFOs.

“I don’t believe this particular set of sightings were extraterrestrial, but I don’t know what it was,” he said.

People have come up with explanations from balloons to blimps to experimental aircraft by the government.

“But nobody has ever come to a conclusion on it,” he said.

Gordon and Dellinger wrote a book about the ordeal called “Don't Look Up: The Real Story Behind the Virginia UFO Sightings.”

Is the truth out there? Peter Davenport thinks so. Davenport is the director of the National UFO Reporting Center. It was started in 1974 by a retired Seattle fireman who was interested in the UFO phenomenon and believed the issue needed a central headquarters to gather information, Davenport said.

In 1994, Davenport took over. He said he fields anywhere from 15 to 30 reports of UFOs per day. The online database that he maintains has more than 100,000 entries from all 50 states, the territories of Canada and some other countries.

“Once you start seeing the data and seeing what people are seeing and observing and experiencing, you begin to realize there is a larger reality than what our mere five senses suggest is the case,” he said.

When he was 6, Davenport, surrounded by his family and hundreds of other people, said he saw a UFO at a drive-in theater in St. Louis.

“I’ve been hooked by the subject ever since, I’m afraid,” he said.

Davenport is aware there are skeptics out there. His response to those who doubt the existence of UFOs is to look at the data; he’s not a fan of the term “belief.”

“What I seek is evidence,” he said. “Photographic evidence, radar evidence — multiple eye witnesses, all of whom seem to be independent and reliable, reporting the same thing — that is the type of data I aspire to collect.”

Occasionally, instead of taking a page from E.T. and phoning home or phoning the NUFORC, those who claim to spot UFOs call the police.

Chief Deputy Byron Ashbrook of the Washington County Sheriff’s Office said calls about UFOs are rare, but they do occur — maybe once or twice a year.

Ashbrook said the calls are treated like any other air traffic incident, like a report of a low-flying plane, for instance. Deputies ask for a detailed description and any identifying marks. Sometimes, they’ll call local airports for information.

Capt. Charlie Thomas, of the Bristol Tennessee Police Department, said in the time he has been at the department, since 1992, he hasn’t witnessed anything inexplicable.

If something were reported, “we’d go look and see if we observe whatever it was they were reporting and go from there,” he said.

Thomas said he knows of one UFO story from sometime in the late ’70s or ’80s, when a man wrecked his car near King College.

“His excuse was a UFO ran him off the road,” Thomas said.

Drivers who pass Blountville Boulevard and Birch Street may run off the road if they’re unprepared for the UFO and two aliens resting in Gail Cooke’s front yard.

It’s an odd sight: The silver UFO is the size of a Volkswagen Beetle. Each alien is painted silver and stands about 4 feet tall. These days, one of the aliens is missing a head.

The otherworldly scene has been in the area for 40 years, since Cooke’s husband, Bruce, built it from a variety of parts. It has become something of a famous photo opp. Cooke, 77, said most days, two or three groups stop to take a photo by the UFO.

“People may not remember anybody’s name, but they know where the spaceship is,” she said.

Cooke’s husband, Bruce, died six years ago. Many years ago, he told her he saw a UFO near his work at Holston Ordinance Works.

“I don’t know whether he did or not or whether he was just sleeping or dreaming,” Cooke said, laughing.

As for her own belief, Cooke said she doesn’t think about it too much.

“It makes sense that we’re not here by ourself,” she said. “I don’t know what’s out there, but I’m not going to worry about it — I have a hard time taking care of my little corner.

“There’s a lot of things in the world and in the universe that we don’t know, and we’re not meant to know and not meant to understand,” she said. “But you can’t say no to anything.”

Cooke’s UFO is made from two large fiberglass satellite dishes and a furnace top. Its legs came off a big TV camera. The aliens are plastic mannequins with foam heads.

Cooke said a lot of people have offered to buy the UFO.

“It’ll be there until I’m gone,” she said. “Somebody else can sell it.”

Davenport said a lot of witnesses want to call and talk at length about what they saw.

He prefers to get them off the phone and start writing.

He receives photos nearly every day, but he’s often let down.

“The overwhelming majority of the photos are not very satisfying,” Davenport said. “They’re vague, of poor quality and often taken with a cell phone.”

When asked if he worries that people are calling in hoaxes, Davenport said he can’t know for sure that every call is legitimate, but that doesn’t matter.

“That’s the same in journalism, it’s the same in law, in business, in government service — that is a problem that plagues every aspect of our existence on this planet: a person telling you the truth.”