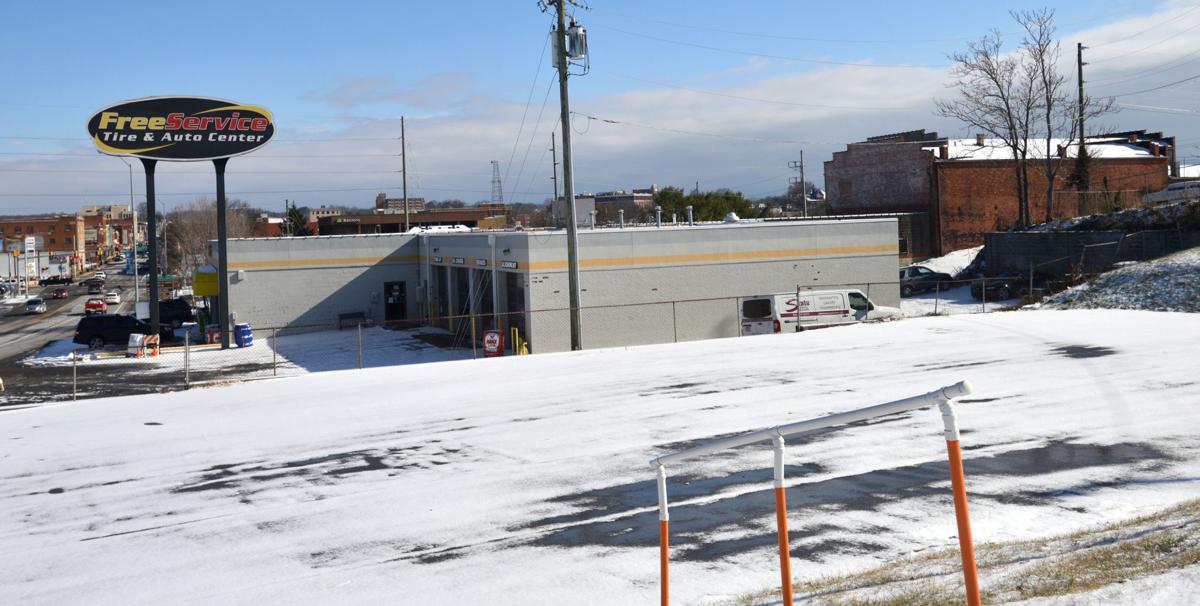 The area encompassing a empty used car lot, Free Service Tire and several other buildings bordering State and Shelby Streets are the proposed location for a new hotel project. 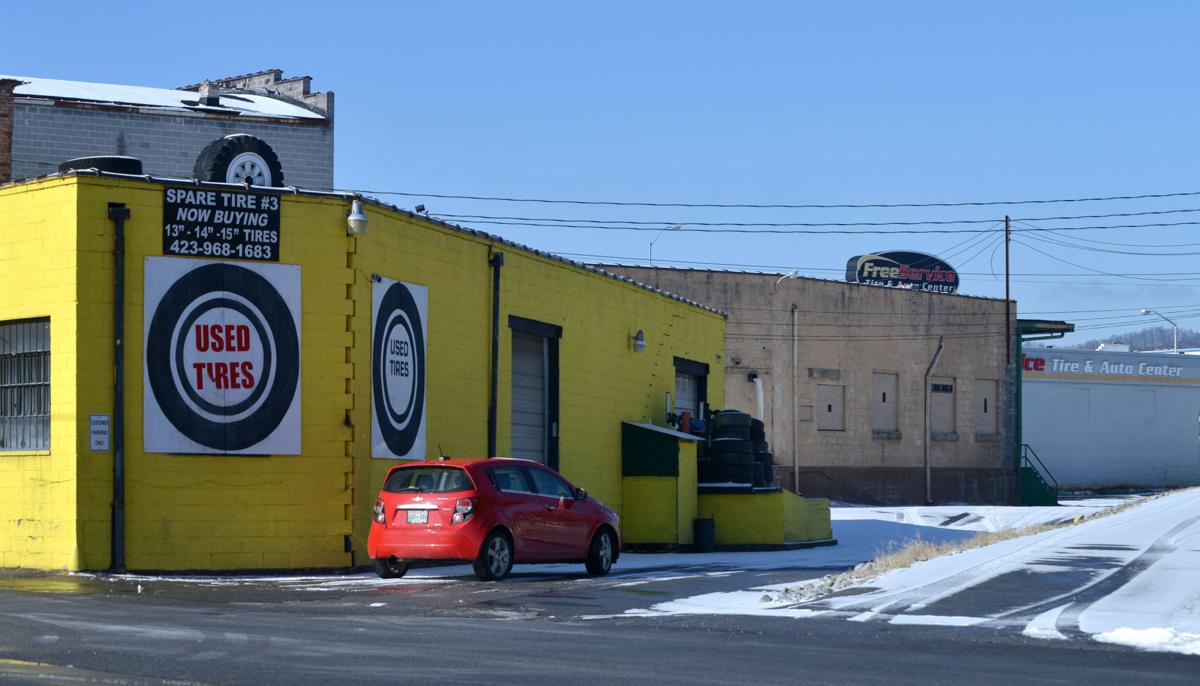 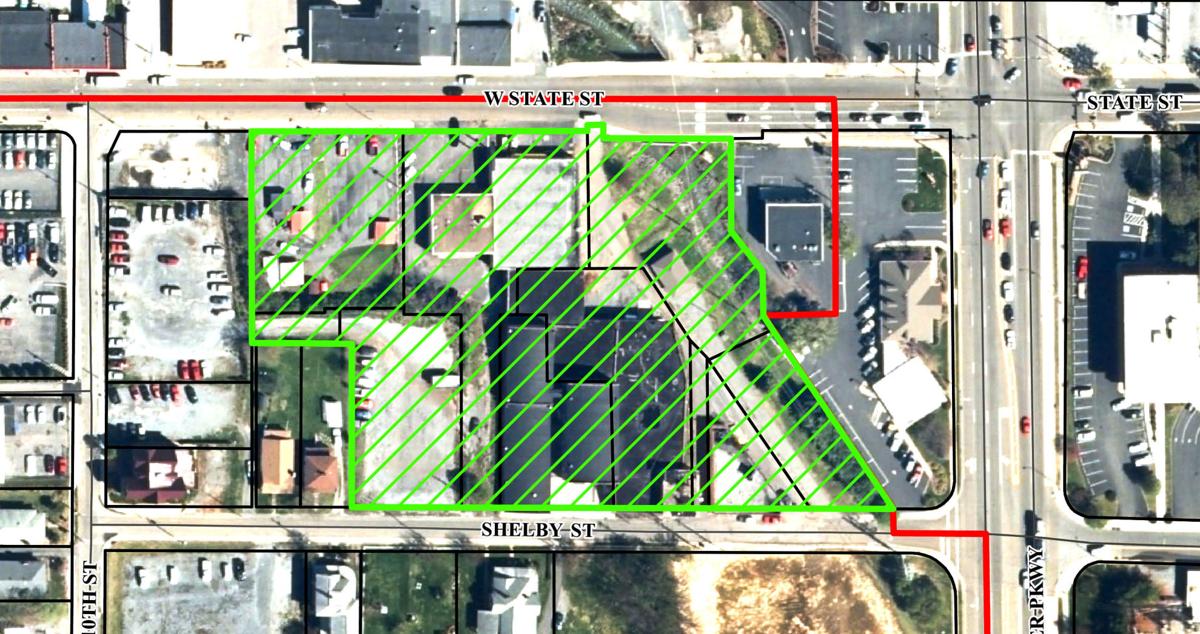 The green shaded area is the proposed area for a 86,000 sqare foot, six story hotel.

The area encompassing a empty used car lot, Free Service Tire and several other buildings bordering State and Shelby Streets are the proposed location for a new hotel project.

The green shaded area is the proposed area for a 86,000 sqare foot, six story hotel.

The proposed full-service hotel, currently named the Tenneva Hotel Project, would be constructed behind the Bristol Chamber of Commerce — facing Volunteer Parkway — according to city documents obtained by the Bristol Herald Courier.

Plans call for a six-story, 86,000-square-foot hotel with 143 guest rooms, an indoor pool, a fitness facility, a restaurant, a meeting space and 158 parking spaces, documents show.

“The proposed hotel is a major chain,” city Economic Development Director Tom Anderson said. “But the big deal is that it’s locally owned and the owners want to make a change to the downtown — they want everyone to win.”

He declined to name the owners or the chain.

The proposed hotel falls within an area that has received considerable attention from the City Council in recent weeks. Earlier this month, the council unanimously approved a series of changes to create a business expansion zone in the West State Street corridor, including allowance of buildings up to six stories tall, changing parking requirements and establishing signage and design standards.

Anderson said plans to build the hotel include tearing down Free Service Tire store and that business relocating.

“Domino’s Pizza and the homes behind the hotel will remain intact,” Anderson said. “But Free Service will be rebuilt at another location on West State Street.”

He added that the city did not offer Free Service any incentives to move, saying, “That was something between the developer and Free Service.”

The hotel project will only occur if tax increment financing [TIF] is approved by a series of entities, Anderson said.

“There is a public hearing coming up next week about the TIF,” he said. “If the TIF amendment is adopted at the meeting, it has to be adopted by the City Council and Sullivan County [Commission] before anything is final.”

With TIF, governments can agree to divert future property tax revenue increases to developers within a defined district earmarked for economic development. By law, housing and redevelopment authorities must first adopt an amendment agreeing to administer the funding.

Bristol Housing will host the public hearing at the auditorium in Edgemont Towers on Jan. 24 at 3 p.m.

If Bristol Housing approves the amendment, Bristol Tennessee City Council is expected to vote on whether to approve the funding at its Feb. 6 council meeting. If approved, the Sullivan County Commission could hold first reading of the amendment at its Feb. 15 meeting. A second reading would occur in March.

Under the terms of its agreement, the developers will donate property to the city to enlarge the existing turn lanes at the intersection of West State and Volunteer Parkway to help alleviate traffic issues, the document states. The city and Bristol Housing are to cooperate in the planning and construction of streets, roads, sidewalks and traffic signals.

The proposed project is expected to create about 85 full-time permanent jobs and around 100 jobs during its construction.

“The owners are making an investment to Bristol that can have a huge impact on our footprint,” Rhinehart said on Tuesday. “If the hotel comes to fruition, our visitors will be able to walk downtown to shop and eat.’

She added that having meeting space in Tennessee would also be a plus.

“Some of our governmental entities can’t cross the state line for meetings,” she said. “So having an additional location would be helpful.”