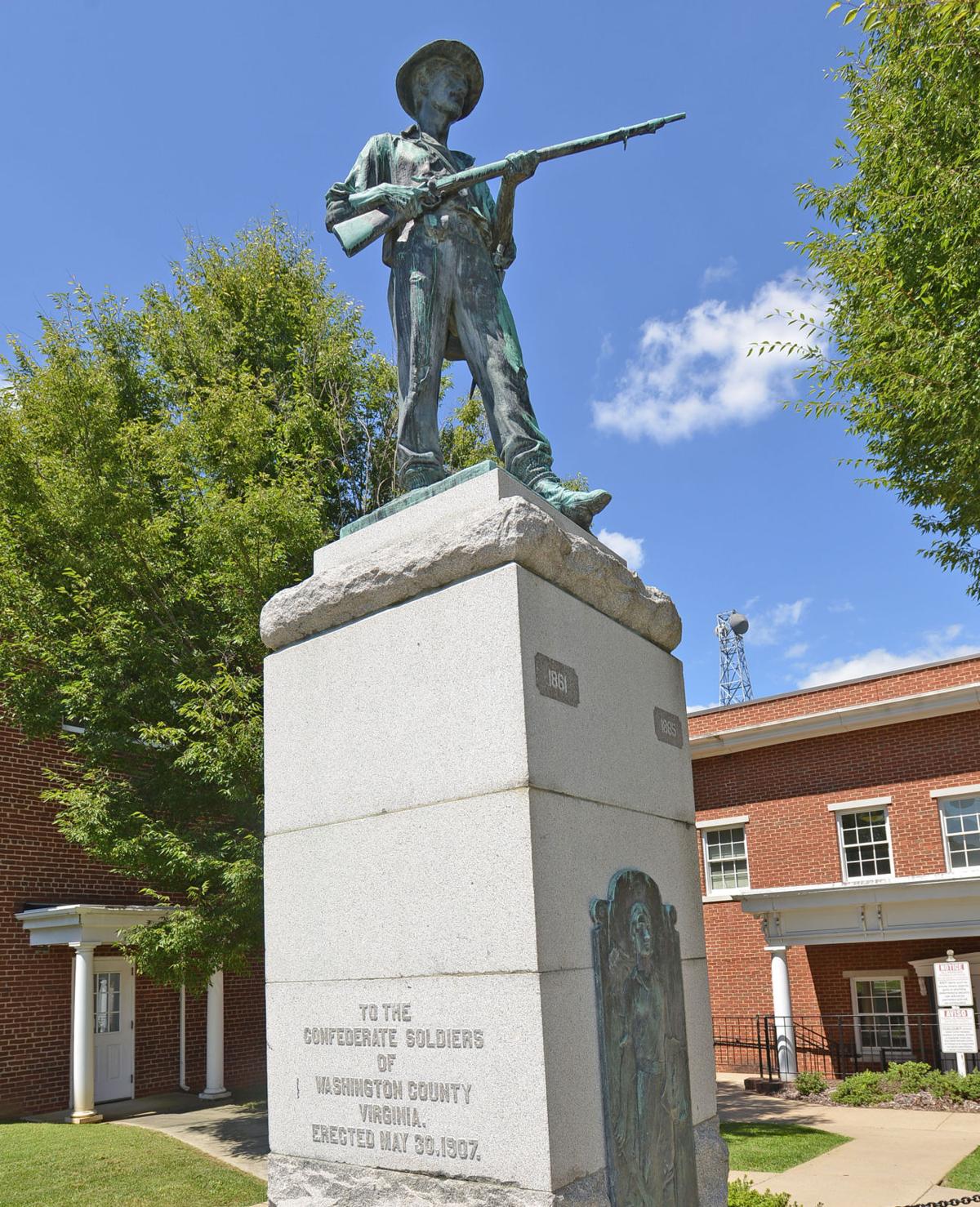 The Washington County Courthouse in Abingdon, Virginia, has two monuments for Confederate soldiers. One is a soldier to remember all who fought and the other is a memorial to the generals who were from Washington County. 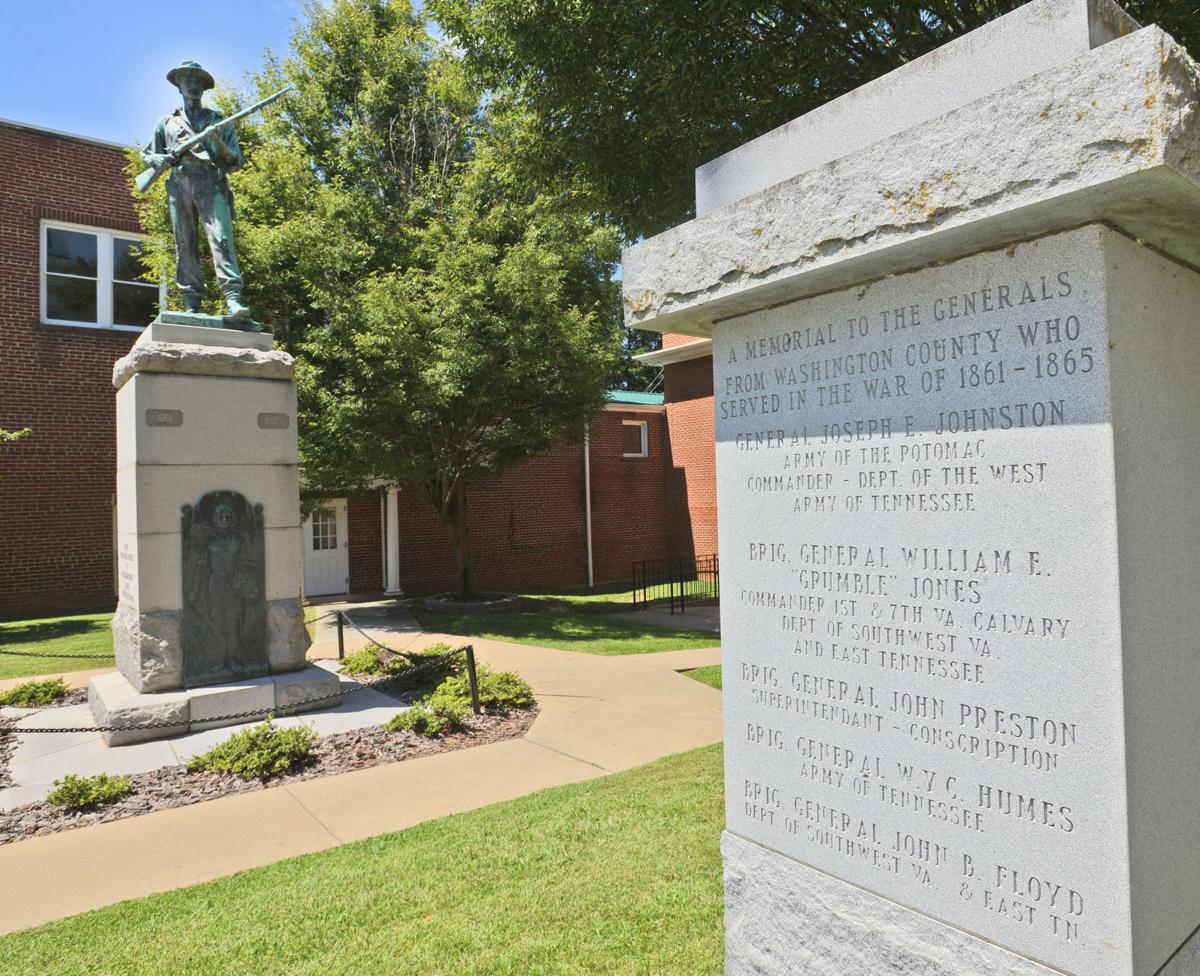 The Washington County Courthouse in Abingdon, Virginia, has two monuments for the Confederate soldiers. One is a soldier, left, and the other is a memorial to the generals who were from Washington County.

The Washington County Courthouse in Abingdon, Virginia, has two monuments for Confederate soldiers. One is a soldier to remember all who fought and the other is a memorial to the generals who were from Washington County.

The Washington County Courthouse in Abingdon, Virginia, has two monuments for the Confederate soldiers. One is a soldier, left, and the other is a memorial to the generals who were from Washington County.

ABINGDON, Va. — As anti-racist protests in communities across Virginia and other states push to remove Confederate monuments from public spaces, a new petition is calling for local officials to relocate two monuments from outside the Washington County Courthouse in Abingdon to a nearby cemetery.

Demonstrations against police brutality and racism have swept across the country in the aftermath of the police killing of George Floyd in Minneapolis last month. The activism has taken on a wide range of issues, including Confederate monuments that protesters have denounced as symbols of white supremacy.

So far, the effort has garnered about 1,600 signatures.

The proposal would take the two Confederate monuments that are currently located outside the courthouse in downtown Abingdon and move them to the Sinking Spring Cemetery, a town-owned cemetery with Confederate graves.

One of the monuments is a statue of a soldier. The other is a smaller memorial to generals.

Evans is a political science professor at the University of Virginia’s College at Wise. She said her proposal would allow people who still want to engage with the monuments to still do so while making the courthouse a more welcoming space.

Moving the monuments might also provide additional room for future expansions at the courthouse, which already has space constraints, Evans said. In a referendum last year, county voters rejected a proposal to move county court functions to a vacant Kmart building in Abingdon.

The generals’ memorial was unveiled in August 1999, but the statue of the soldier is much older.

It was formally dedicated June 3, 1908, when an estimated 5,000 people filled the street to see the monument at the intersection of Main and Court streets, according to an account published at the time in the Bristol Herald Courier. (The statue would later be relocated to its current location next to the courthouse in the 1930s.)

The original dedication date in 1908 coincided with what would have been the 100th birthday of Jefferson Davis, the Confederate president.

Some Civil War veterans attended the event, which featured speeches from figures like John A. Buchanan, a judge on the Virginia Supreme Court who previously served the Confederacy during the war.

“All along Main street the residences and businesses were luxuriantly draped in the national colors, intermingled with banners of the Confederacy, pictures of Lee and Jackson and other great heroes of the ‘lost cause,’” the newspaper reported.

This idea of a “Lost Cause” — a narrative white Southerners used to glorify the Confederacy and minimize the central role of slavery in the conflict — is one of the keys to understanding these monuments, said Julian Hayter, a historian at the University of Richmond.

“Several points are essential to the Lost Cause,” Hayter said in a recent interview. “The first is that the Civil War was about state rights and not slavery, that slavery was a benign institution, slave owners were benevolent paternalists, and African Americans were unprepared for freedom. Anybody who fought in defense of this system was considered a hero, in large part because of the manner in which slavery and the Antebellum South were portrayed as a benevolent region with benevolent institutions.”

The political and social contexts also shape how Hayter says communities should look at these monuments.

Although slavery was no longer legal, Black Americans faced a different form of oppression at the time communities built monuments in the 20th century: Jim Crow segregation.

Abingdon’s dedication of the monument came just a few years after the adoption of the Virginia Constitution of 1902, which included a poll tax that disenfranchised most of the state’s Black voters.

“It is impossible to divorce the erection of these statues from the context in which they were unveiled — and that context is Jim Crow segregation,” Hayter said.

Larry Harley, an Abingdon resident and attorney who signed the petition, also noted the Constitution of 1902 in a recent interview.

That history, combined with the fact that the county courthouse was once a site where wills treated enslaved people as property and that the Confederacy defended this system, have bothered him for years, he said.

“A person of color walking into our court house should not have to question because of symbols we display how they are going to be received by the people who enforce our laws,” said Harley, who once served as the executive director of the Southwest Virginia Legal Aid Society.

Evans is scheduled to deliver a presentation about her petition to the Washington County Board of Supervisors July 14.

Dwayne Ball, the board’s chairman, said he wasn’t sure what the process would look like if the body ultimately decided that it would want to further look into relocating the monuments beyond Evans’s presentation.

“We’ll see what she has to say and then we’ll see what the appetite is of the board to do or not do something,” he said.

Ball didn’t share any specific views about the petition, but said he’s open-minded and would want to talk with historians about the monuments.

At least one counter petition on change.org has already started circulating, advocating for the monuments to remain in place. That one has received over 2,800 signatures.

For her part, Evans said she believes the time is right for a public discussion about Abingdon’s monuments.

“This is a conversation we need to have as a community,” she said.