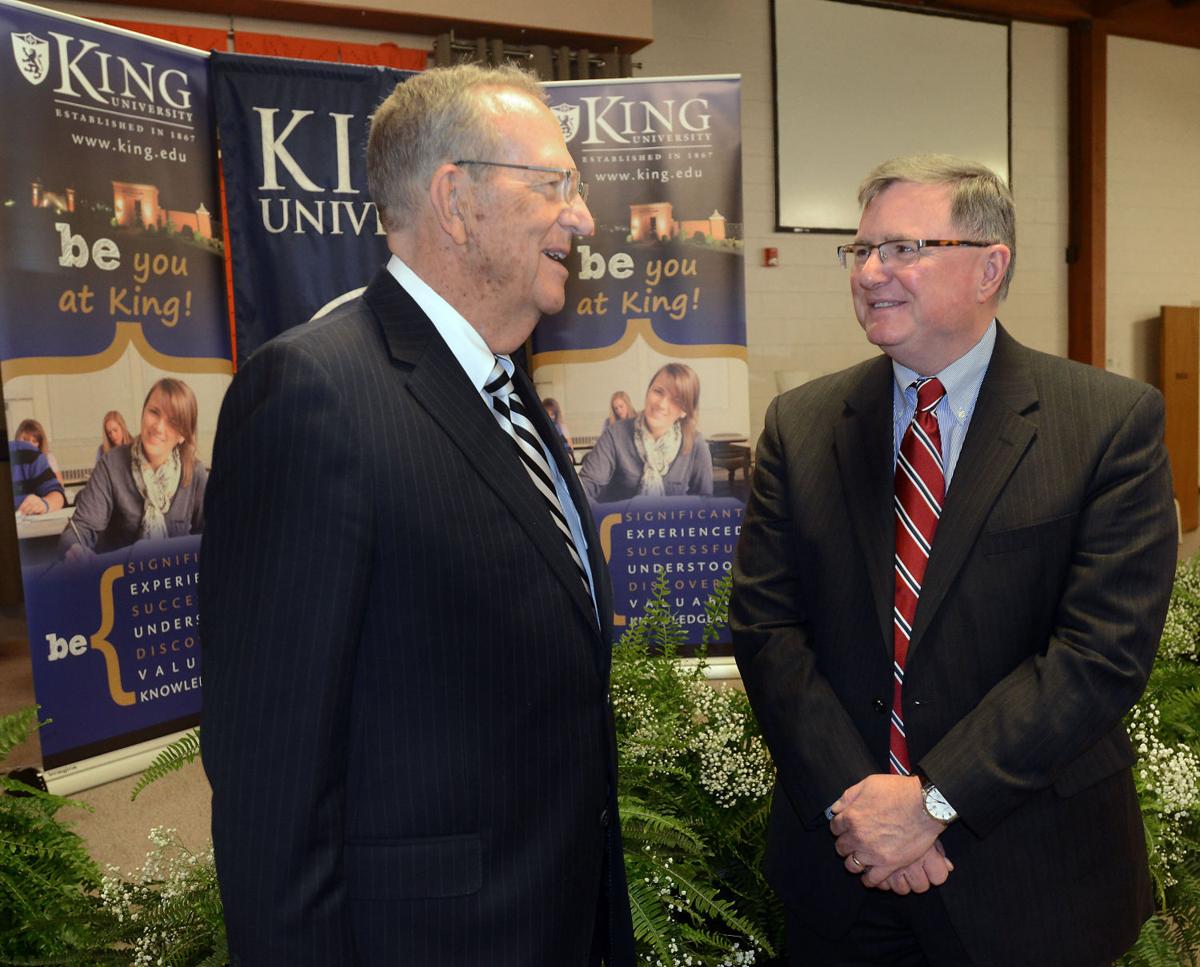 King University Interim President Richard Ray, left, talks with Alexander Whitaker IV who was hired as King's 23rd President during a called meeting of the schools Board of Trustees Monday afternoon. 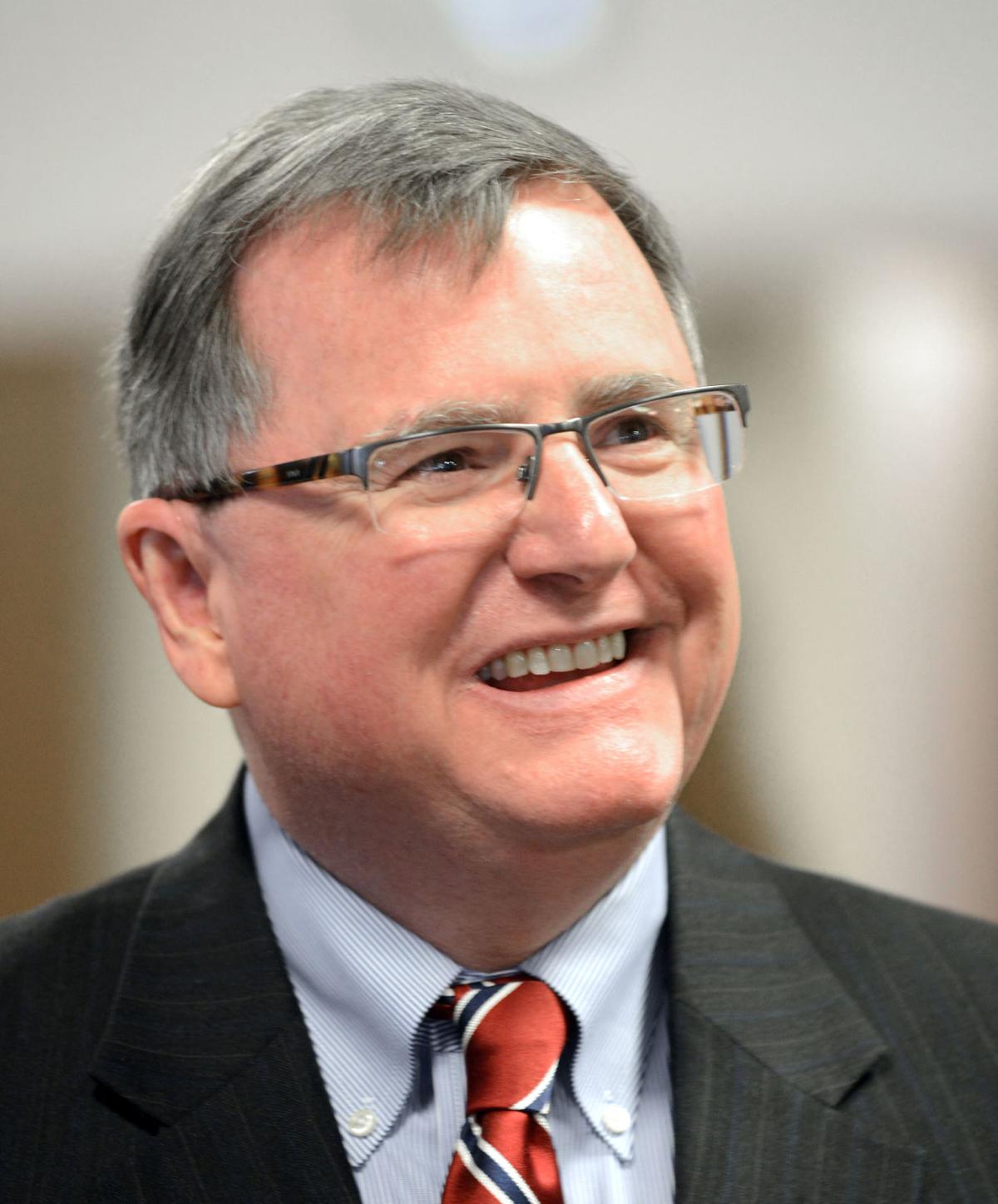 Alexander Whitaker IV was hired as King's 23rd President during a called meeting of the schools Board of Trustees Monday afternoon.

King University Interim President Richard Ray, left, talks with Alexander Whitaker IV who was hired as King's 23rd President during a called meeting of the schools Board of Trustees Monday afternoon.

Alexander Whitaker IV was hired as King's 23rd President during a called meeting of the schools Board of Trustees Monday afternoon.

BRISTOL, Tenn. – Incoming King University President Alexander Whitaker said Monday his first priority will be listening as he takes the reins this summer.

Whitaker, 56, was named Monday as the 23rd president of the 150-year-old institution in Bristol. He is scheduled to begin work Aug. 1, succeeding Richard Ray, who has served as King’s interim president since 2014. Whitaker currently serves as chief of staff and secretary to the board of trustees at Berry College in Rome, Georgia.

He was selected by King’s board of trustees and introduced to faculty and staff at a Monday reception at First Presbyterian Church.

“I think this is an extraordinary opportunity to lead a truly extraordinary university,” Whitaker said. “I’ve known of King most of my life and I’ve had many friends associated with the school. To find myself here is a wonderful moment, professionally and personally. We are particularly looking forward to settling in this area, which is, by far, one of the most beautiful places in the United States.”

Whitaker said it will be an “honor and privilege” to build on King’s existing foundation, including the work of interim President Ray.

“It’s not about me. It’s about seeing the institution thrive, succeed and fulfill its mission,” Whitaker said. “I think the first step is always listening to those who know the institution best – the students, the faculty, the staff and alumni. So, my first order of business is going to be to listen carefully and learn from them. At that point, I’ll be in a better position to say what the right way forward is.”

A member of Berry College’s executive leadership team and an officer of the college, Whitaker has worked closely with that institution’s governing and advisory boards and oversees Berry’s public relations, religious life and historic assets. He began his work at Berry College as assistant vice president for major gifts and has continued fundraising work as chief of staff.

Ray was named King’s interim president after the resignation in February 2014 of longtime President Greg Jordan, who left after months of controversy and calls for his resignation. He also received a no-confidence vote from two-thirds of the faculty.

“We are pleased to welcome Mr. Whitaker to the King University family,” said Warren Payne, chairman of King University’s board of trustees. “He was the top candidate in an unbelievably qualified pool of applicants and he brings with him a deep understanding of the challenges and opportunities facing institutions like King University. His skills and experience will be a tremendous asset and we are excited about the future of King University under his leadership as president.”

King is a doctoral-level comprehensive university, with more than 2,700 students on multiple campuses. Berry has about 2,100 students on a single campus.

“Whit has been an integral part of the president’s office at Berry for nearly a decade,” Berry President Steve Briggs said in the written statement. “He has a deep understanding of how the college operates and he has helped review and shape many key policies. His breadth of experience, eye for strategy and ability to analyze challenging issues will serve King University well in the years to come. The community at King will also enjoy Whit’s keen wit and love of place.”

An attorney and Rome, Georgia native, Whitaker is currently in his 10th year at Berry College, his undergraduate alma mater. He went there after a 25-year career in the Navy, retiring as a captain.

Much of his Navy career was spent in the Judge Advocate General’s Corps, the service’s legal arm, where he focused on litigation and international law. Whitaker was assigned to sea duty and shore tours on both U.S. coasts and in Washington, D.C., and overseas in Scotland, London and Japan. His final tours of duty were as deputy assistant judge advocate general for general civil litigation and then as commanding officer of the Navy’s southeast legal services command.

A member of the Georgia and Virginia state bars, Whitaker earned his Juris Doctor from the University of Virginia in Charlottesville and a master of laws in international and comparative law from Georgetown University in Washington, D.C. He has a master of arts degree in religion from Trinity Episcopal School for Ministry in Ambridge, Pennsylvania, where he serves as trustee. He is also completing further doctoral work at Duke Divinity School in Durham, North Carolina.

He and his wife, Maria, plan to relocate to the region in the coming months.

BRISTOL, Tenn. — Tennessee’s job growth and improved focus on education are the largest contributors to what Randy Boyd, state economic and co…