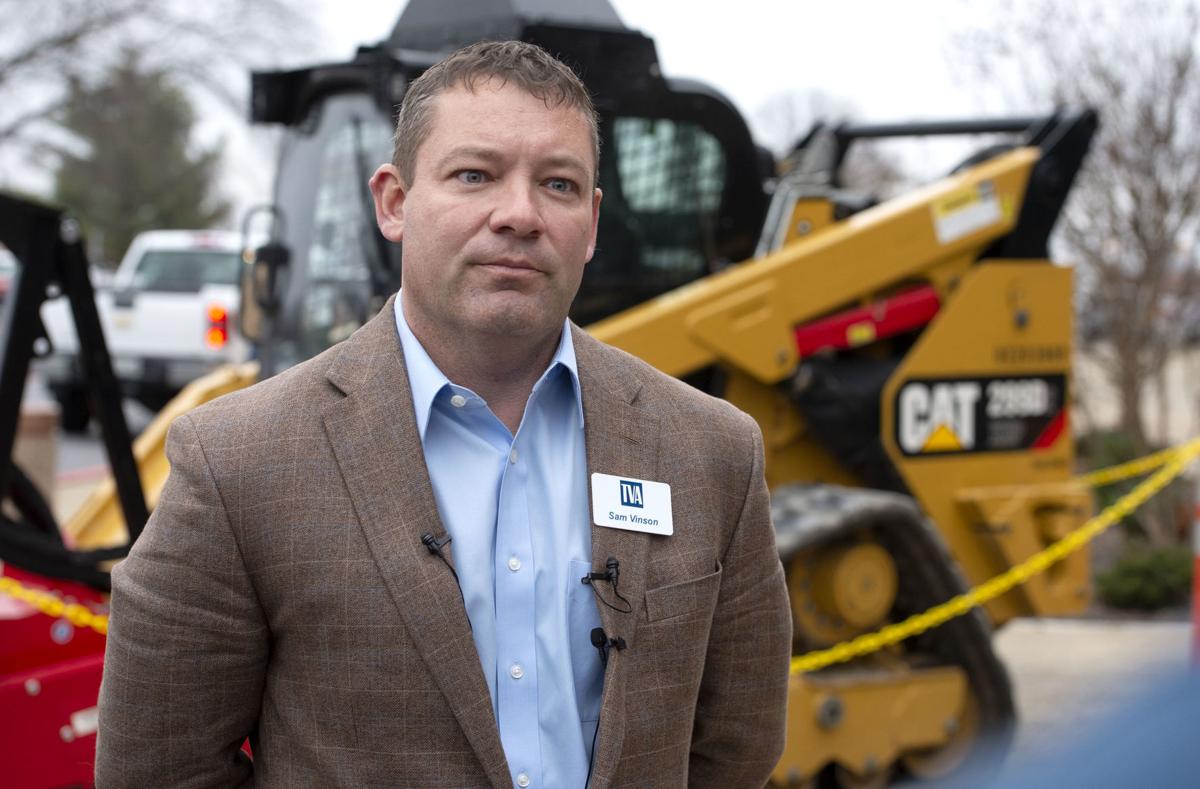 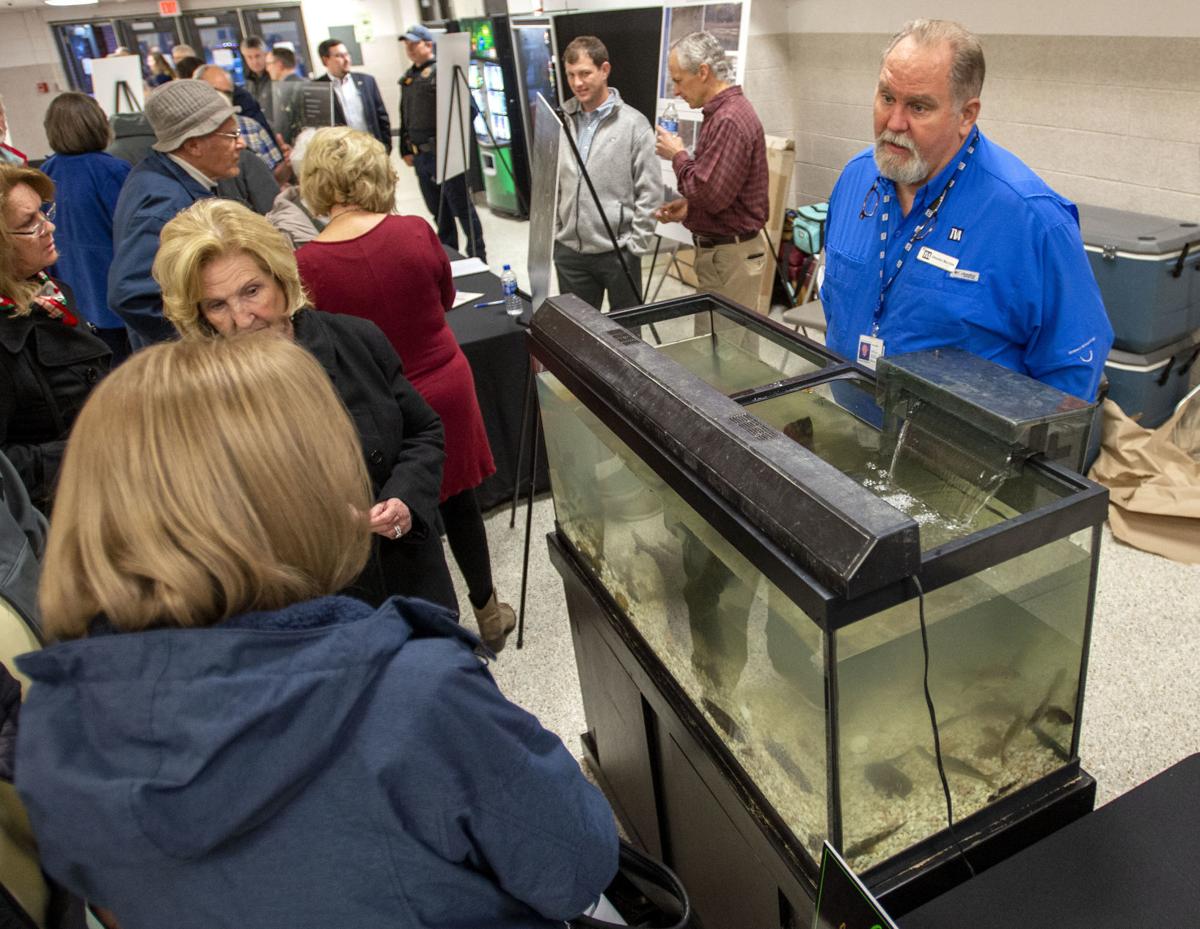 TVA's Dennis Baxter talks with residents about the health and fish population of Boone Lake during the ongoing dam repairs. 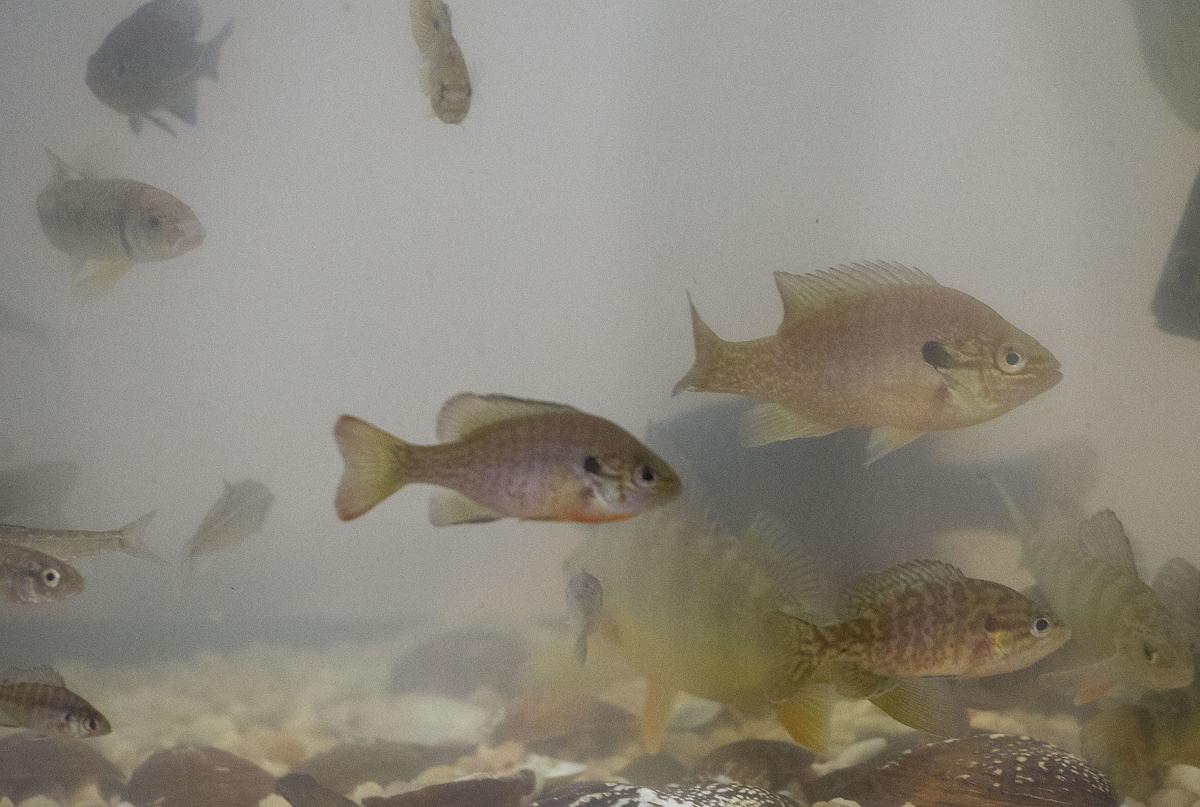 TVA officials show fish that were caught during a lake survey. 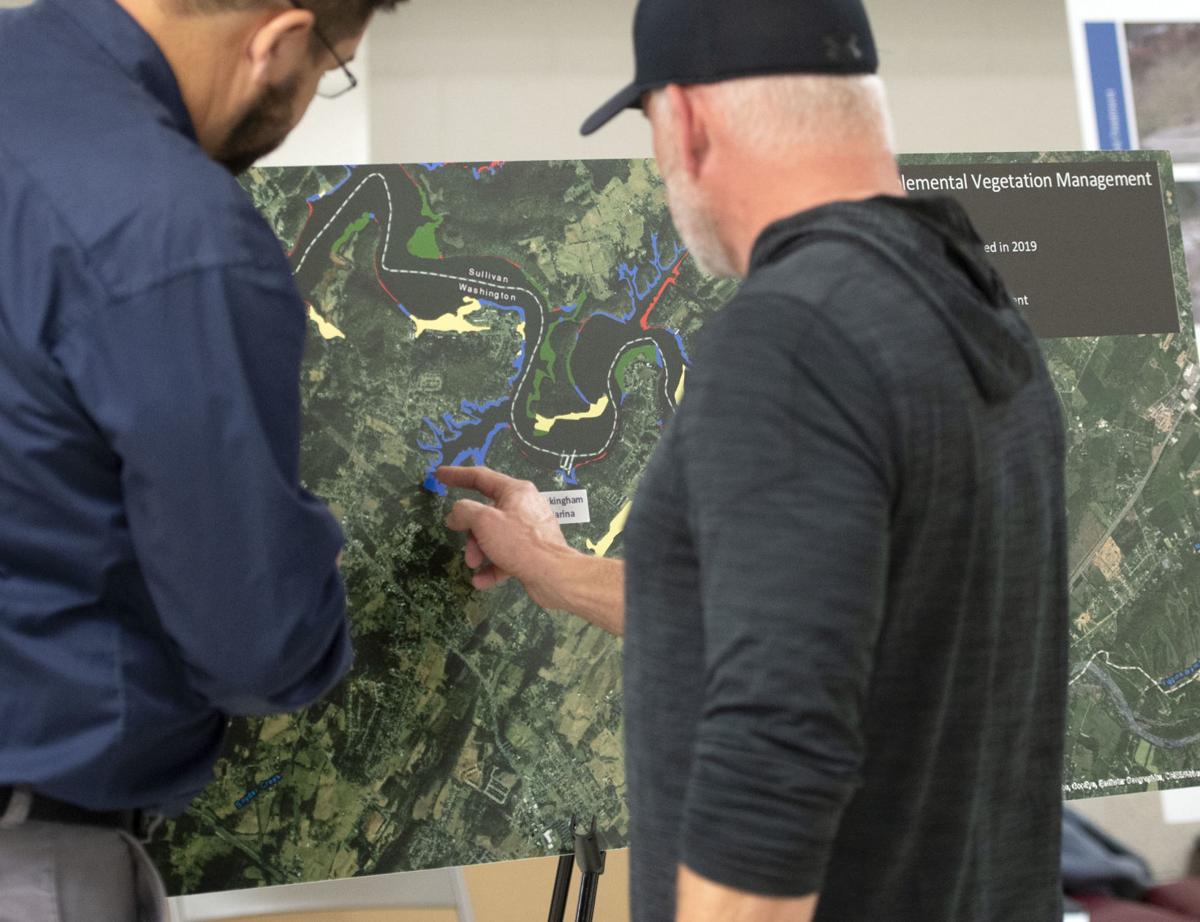 TVA's Jason Yarborough (left) and Jeff Jones (right) look over an area of Boone Lake as they discuss vegetation control. 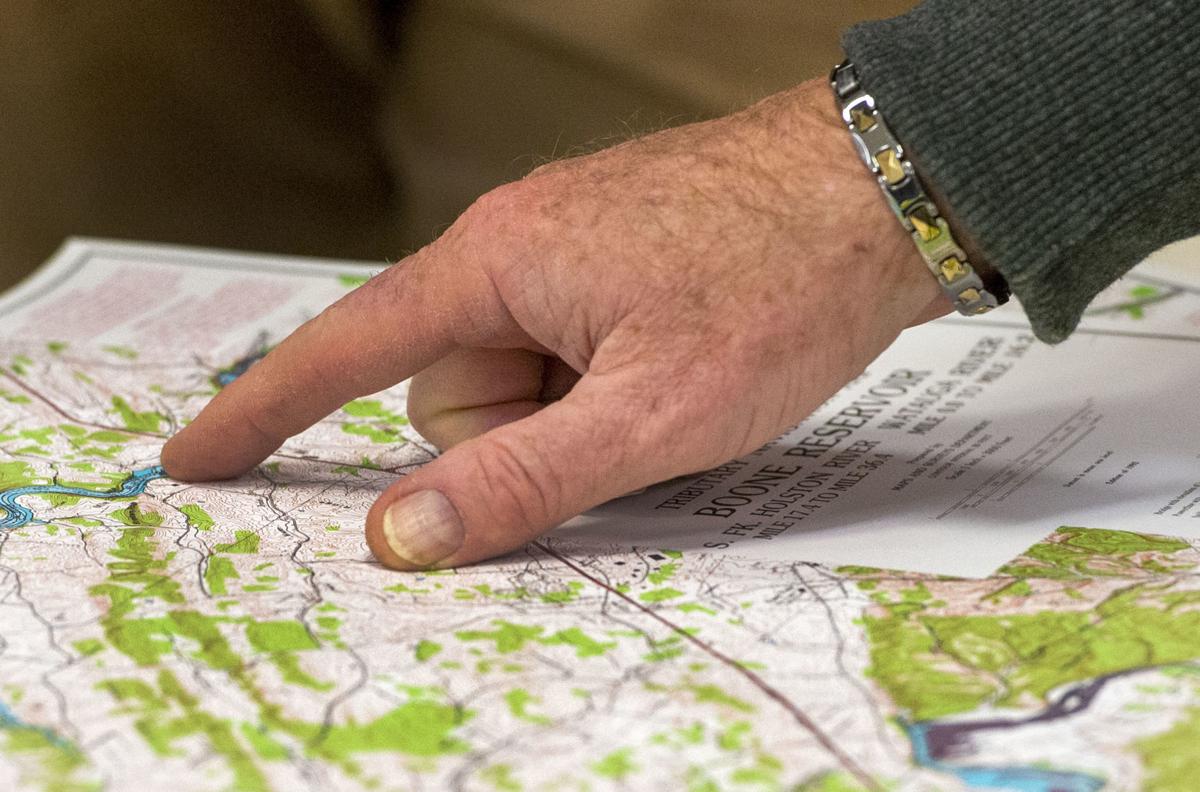 Residents look over maps of Boone Lake as they receive an update from TVA officials concerning the ongoing repairs to Boone Lake Dam.

TVA's Dennis Baxter talks with residents about the health and fish population of Boone Lake during the ongoing dam repairs.

TVA officials show fish that were caught during a lake survey.

TVA's Jason Yarborough (left) and Jeff Jones (right) look over an area of Boone Lake as they discuss vegetation control.

Residents look over maps of Boone Lake as they receive an update from TVA officials concerning the ongoing repairs to Boone Lake Dam.

GRAY, Tenn. — Some Boone Lake homeowners remain frustrated with the amount of vegetation that has grown on their properties amid ongoing Boone Dam repairs.

Tennessee Valley Authority held its annual public information fair at Daniel Boone High School in Gray on Tuesday to listen to concerns and answer questions about its vegetation management plan and the project from those who attended. Tables were set up with displays, maps and other literature regarding vegetation management, dam safety, river management, recreation and more. Boone Lake Association and the Tennessee Wildlife Resources Agency were also on-site.

Boone Lake was lowered to winter pool levels — 30 feet below summer pool — in October 2014 so the cause of sediment seepage at the dam could be investigated. Since then, the lake has remained at those levels, exposing 1,400 acres of lakebed, where vegetation, including trees, is growing.

After a monthslong investigation, TVA officials determined that erosion caused the seepage and the earthen embankment of the dam would be repaired by placing a composite seepage barrier, or a cutoff wall, under the embankment and grouting — the process of injecting grout, a mixture of rock, cement and water — into the dam. Grouting is complete, and construction of the wall is underway.

TVA officials gave a five- to seven-year estimate for completion in 2015, which is on track to wrap up in May 2021 with lake levels returning to normal operation by July 2022. The project is still within its $450 million budget.

Last September, TVA announced it would mulch hundreds of acres of vegetation on the lakebed, which later was determined to be 512 acres, according to Sam Vinson, Boone Dam project manager. TVA set aside $2.1 million for the mulching. More than 130 acres were added to the list by request of landowners. Mulching will resume in January or February, Vinson said.

Vegetation growing on the lakebed and the timeline of the repairs has frustrated homeowners, business owners and recreationists throughout the duration of the repairs, but it actually boosts the viability of fish health and population, Vinson said.

Every year, interest in vegetation management plans at the information fair remains high.

Jeff Jones, of Johnson City, said he attended to find out what TVA’s plans are for the portion of his lake property that is rocky.

“I got my answers,” Jones said. “Mine’s rocky, so it’s going to be a little difficult to get into it, so they’ve talked to me about the vegetation and how they’re going to potentially treat it.”

TVA is considering using herbicides in areas that can’t be reached with a mulcher, Vinson said. Jones’ property is a likely candidate.

The low lake levels have been a little frustrating, but he and his family adapted by making a path to the lake and building a new floating boat dock, Jones said.

“We’re making the best out of the situation,” he said.

Jones and his family built their home on the lake after water levels were lowered and look forward to the water returning to normal levels.

Cynthia and Bruce Philipp, of Johnson City, said they’re concerned the vegetation could pose a safety hazard for boaters once lake levels return to normal.

“It’s great for fish but bad for boats, so they’ve got to clear it out well and down to a certain level where your boats don’t hit it,” Bruce Philipp said.

He added that he knows it’s a difficult job.

The mulching helped, but only temporarily, Cynthia Philipp said. She thinks TVA needs to return and mulch again and spray herbicide to keep the vegetation at bay longer.

Val Kosmider, president of the Boone Lake Association, said the association is happy with the schedule of the project. The association’s focus is on raising funds to buy equipment to “clean up the mess” out of the lake after water levels rise, he said.

Visit www.tva.gov/Newsroom/Boone-Dam-Project for more information about the project, including how property owners can manage lakebed vegetation.