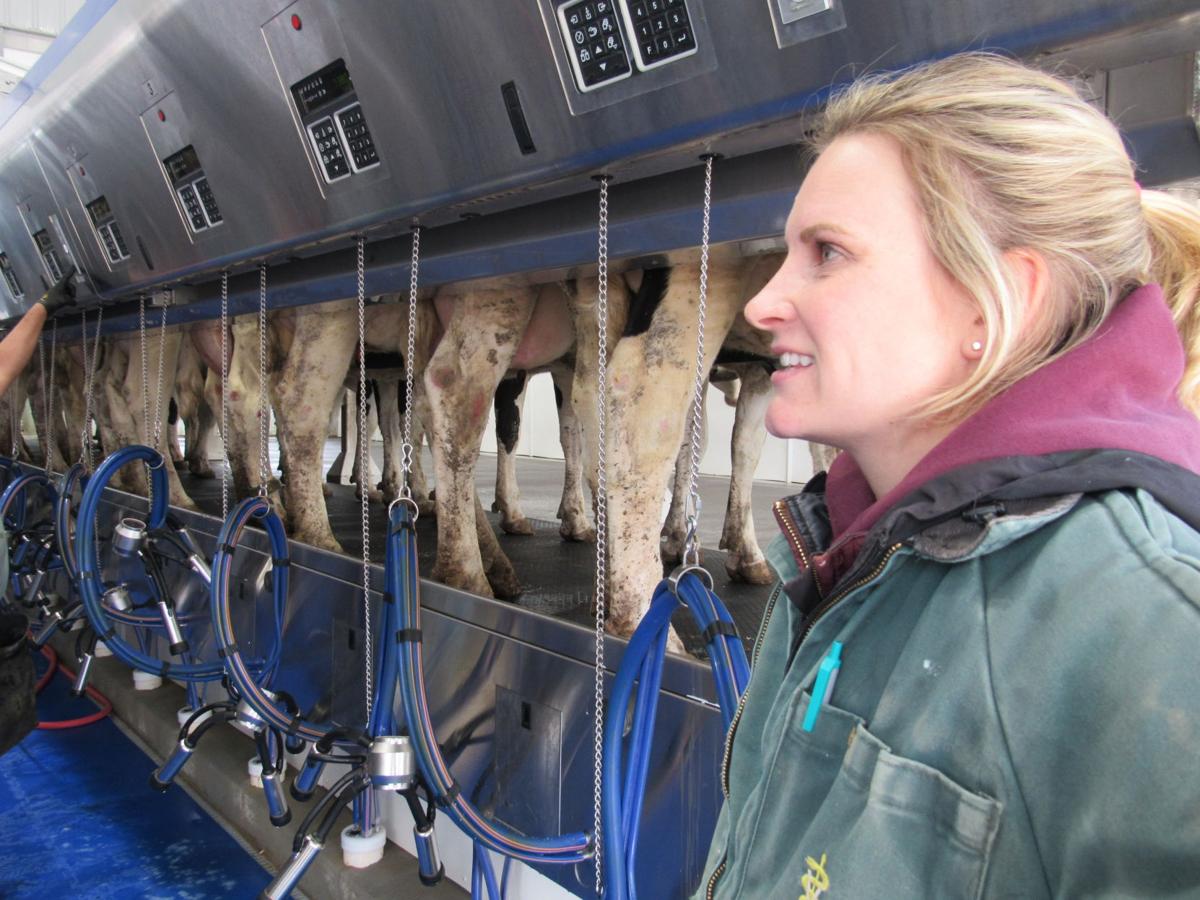 Rena Johnson, who operates the family’s dairy business in Glade Spring, said an investment in a new, state-of-the-art milking parlor will enable her to milk cows for at least the next 40 years. The new parlor is a double 16 configuration, milking 32 cows at one time. 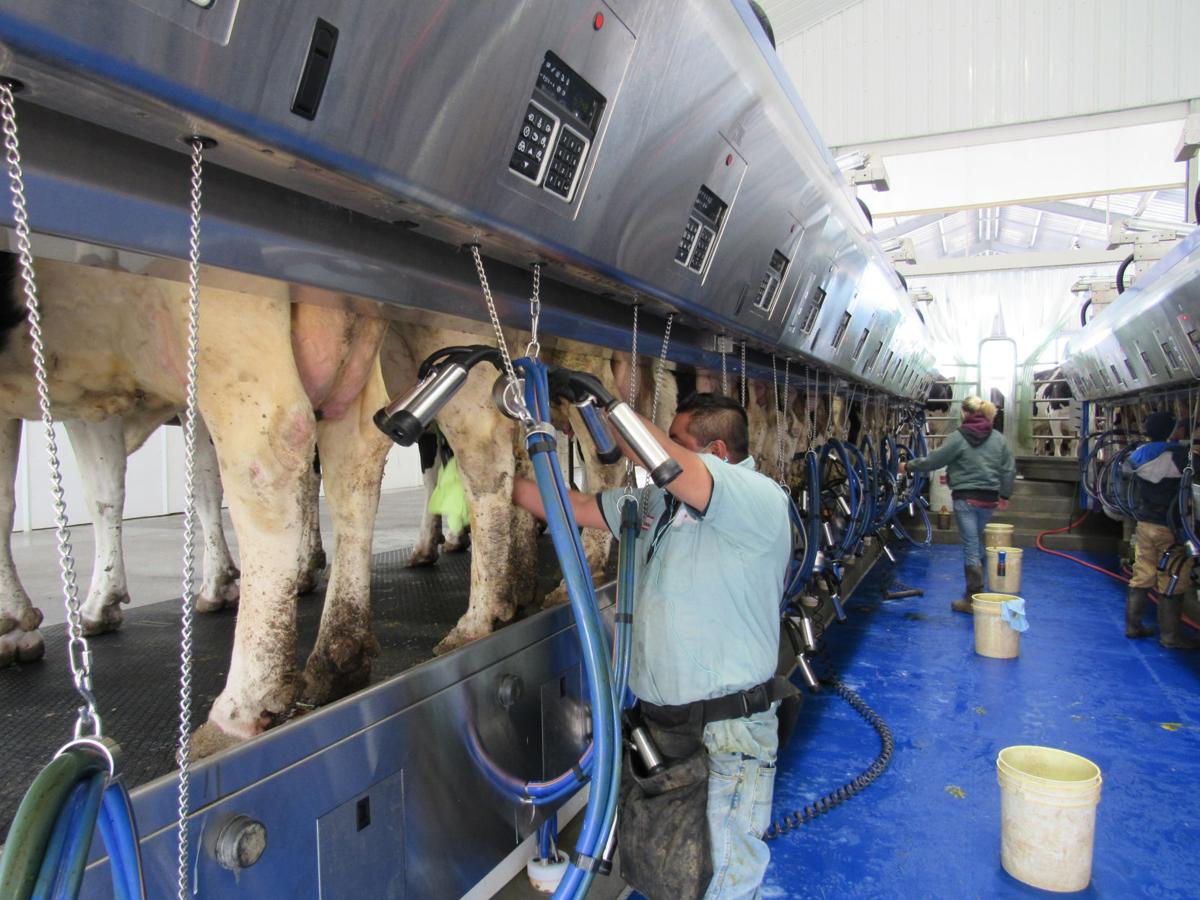 Marcos Rodriguez, a milker at Highland Dairy, prepares to attach milking units to the cows. Above milking platforms, a built-in computer monitors the milk flow and production of each cow. 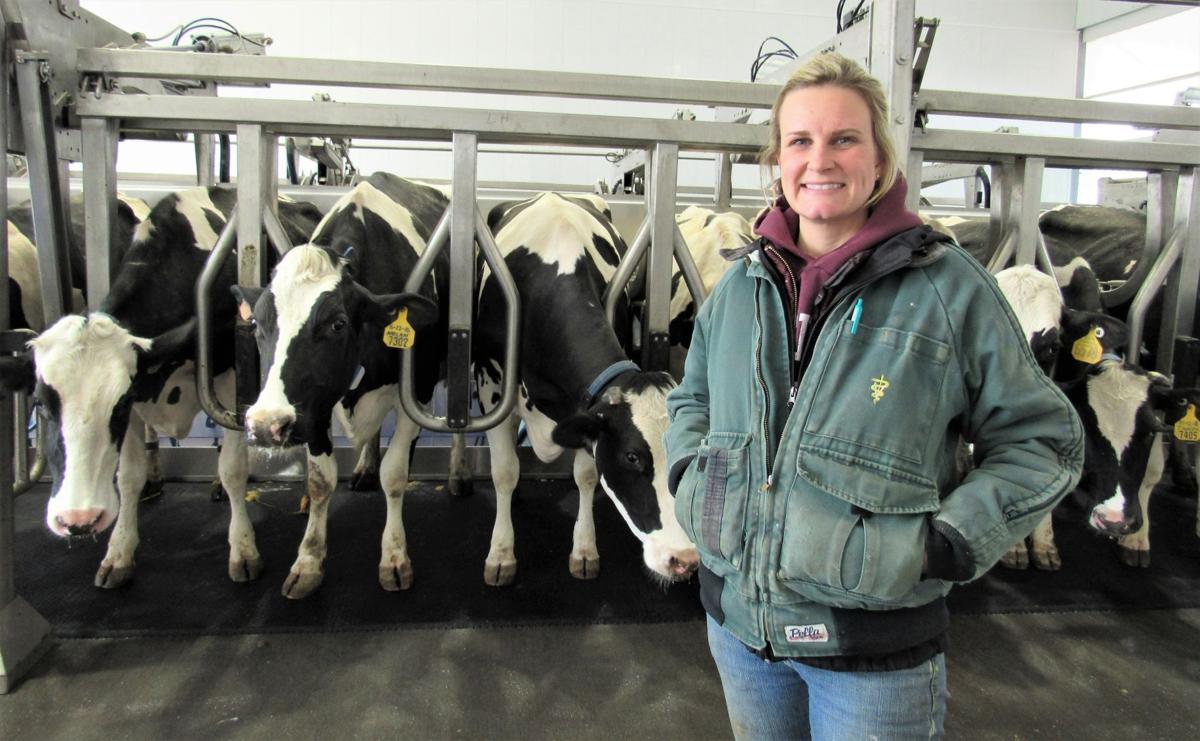 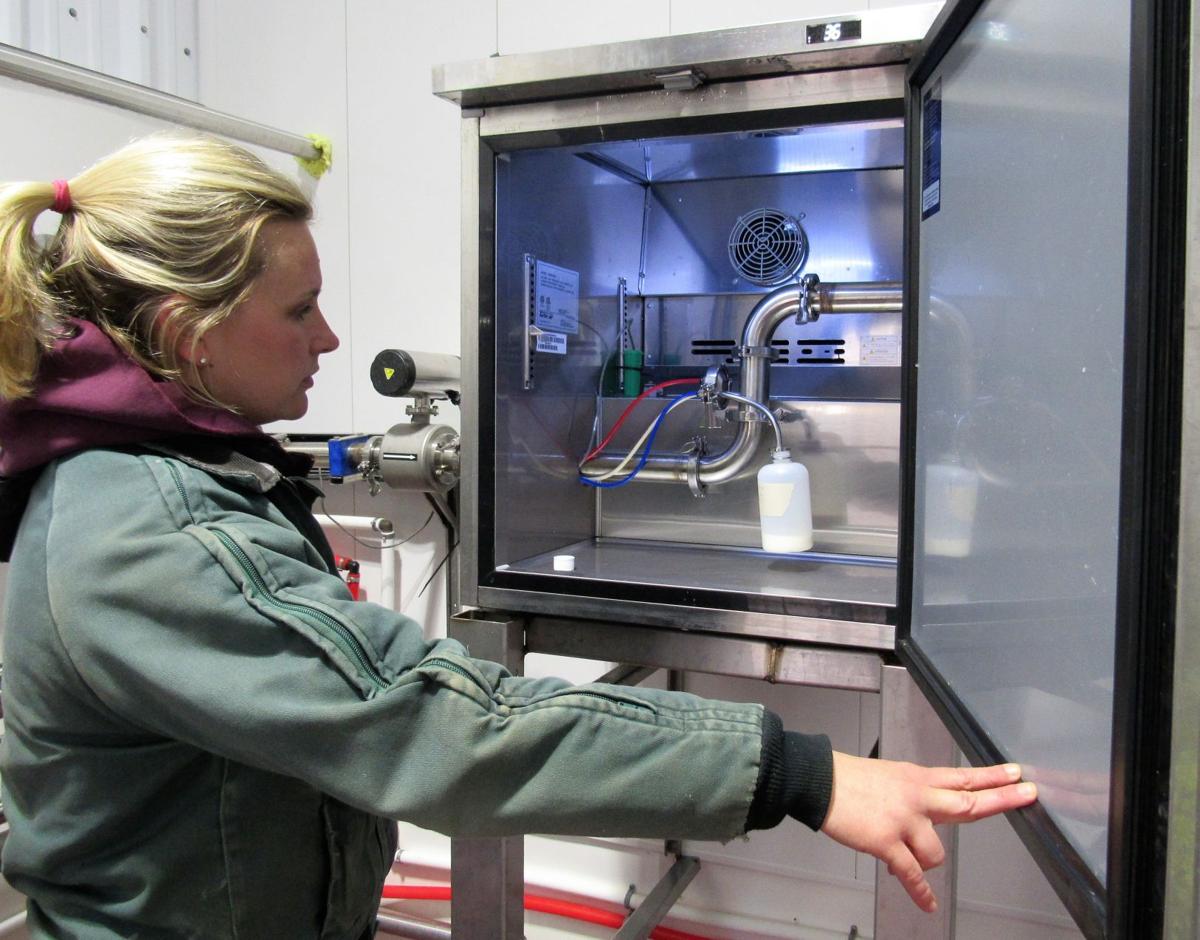 A refrigerator in the new barn holds an in-line sampler that takes a representative sample of the milk which is regularly checked for bacteria count, milk quality, and fat and protein content.

It’s thanks to a new milking parlor that’s not only making the cows more comfortable, it’s improving dairy profits for the three-generation farm family.

Highland Dairy is the pilot farm for a new revolutionary design by DeLaval, a worldwide leader in milking equipment and solutions for dairy farmers with headquarters in Sweden.

“We’re the first farm in the world to use this design commercially,” said the young dairy farmer. “It’s a pretty big deal for our farm in this little corner of Southwest Virginia.”

Last week, a video crew representing DeLaval traveled from New Zealand to the Washington County farm to make a promotional video of the cutting-edge equipment in use.

The video, which includes interviews with Johnson, eventually may be used as a DeLaval Virtual Farm Tour on the company’s website to advertise the P-500 model of the milking parlor.

DeLaval dealers from across the country are expected to bring prospective buyers to the Glade Spring farm throughout the year to see the revolutionary milking parlor.

“A month ago, we had 60 DeLaval dealers visit the farm, representing 20 different countries,” Johnson said. “People who work for the company visit us to learn about the parlor and return to their respective countries to promote the new equipment.”

Johnson, who grew up learning about the dairy business and graduated from Virginia Tech in 2006, described the purchase as a “leap of faith.”

“We definitely needed to do this if we were going to stay in business, and I wanted to make this change while I had the help of my dad,” she said.

Her father, Dave Johnson, was instrumental in designing the barn for the new parlor. The construction, which began a year ago, suffered several delays before it was completed and ready to use in January.

“We had a sinkhole appear, two hurricane events and I don’t know how many inches of rain to endure before it was done,” Johnson said.

The milking parlor they had been using, a 1970s model, was outdated, and repair costs were increasing each year, she said.

“We knew if I wanted to milk cows for my lifetime, we had to have a new parlor. It was scary to borrow the money, but we did it. Now, I’ve sealed my future. I’ll be milking cows for the rest of my life,” Johnson, 35, said with a laugh.

The new parlor has replaced a herringbone design. With the herringbone parlor, cows were stacked in a 45-degree angle, milking from the sides of the udders.

The new parlor is a double 16, milking 32 cows at a time. Milking equipment is attached to the udders at the rear of the cow between the legs.

Marcos Rodriguez, a three-year employee at the farm, said he likes milking the cows in the new parlor.

“Especially since I get kicked less with this system,” he said.

“The challenge with the new equipment was getting the cows to enter the parlor and make a 90-degree turn when they were used to making a 45-degree turn. Cows are creatures of habit,” Johnson said.

“Extra helpers — friends and neighboring farmers — were called on to help physically push the cows into the parlor spaces because they had no idea what was going on. Now, they’re used to it, and I think they really like it better. They have more room to stand and move around. That makes me happy, too.”

The new parlor is amazingly quiet. The milking equipment is under the parlor, leaving the milking area free from noise and distractions.

The new parlor is also making the milking process more efficient and quicker.

“In the old parlor, we milked at best 80 cows in an hour. In the new one, we have the capability of milking as many as 140 cows an hour,” said Johnson.

Because the equipment is faster, she is able to eliminate three hours off each milking time during the day.

“We’ve gained five pounds of milk per cow. When you milk them an extra time during the day, you get more milk.”

Johnson is impressed with the efficiency of the new equipment.

“Cows spend less time in the new milking parlor than before, even though we’re milking an extra time during the day. The equipment is so much quicker. The cows can get in and out, allowing them to go back to the barn to eat or lie down,” she said.

Safety is another important benefit to operating with the DeLaval system.

“Before, the milk went into two big bulk tanks, which stored and cooled it before it was loaded onto milk trailers. Now, we do direct load, which means the milk goes straight from the cow through a chiller, bringing the milk from 101.5 degrees to around 33 or 34 degrees, then on to the milk trailer.

“A flow meter lets me know when the trailer is full and ready to be switched to another trailer.”

Johnson said an in-line sampler takes a representative milk sample of each trailerload of milk, which is sent off to check for bacteria count, milk quality and fat and protein content.

“Before, we had to take the samples from the tank and send them off to be checked.”

The cows even wear their own form of technology — blue collars with built-in pedometers that monitor their activity and relay the information to a computer. Increased activity signals a cow is in heat and ready to be bred. Low activity may signal that she is not feeling well.

Radio Frequency Identification Technology ear tags track and relay information about each cow to a computer at the barn.

“For example, the computer alerts me if a cow’s milk production is not what it’s supposed to be. I can enter her tag number in a keypad here in the parlor, and she is automatically sorted before leaving the parlor. That way, we can address her needs while she’s here inside the barn.

“Technology in the dairy business is the wave of the future,” said Johnson. “After all, we milk 550 cows, so I have to keep track of each one of them. Who knows what technology will come to the milking parlor by the next generation?”