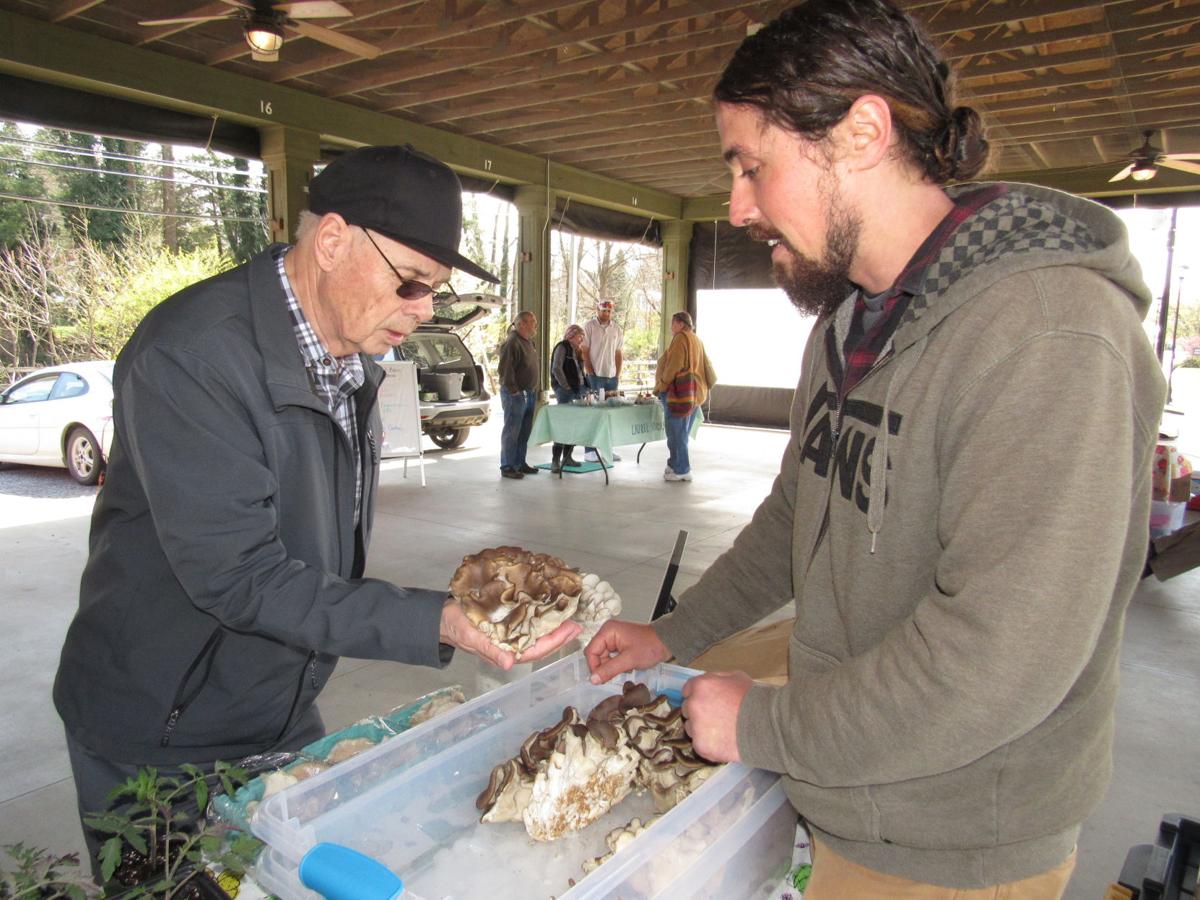 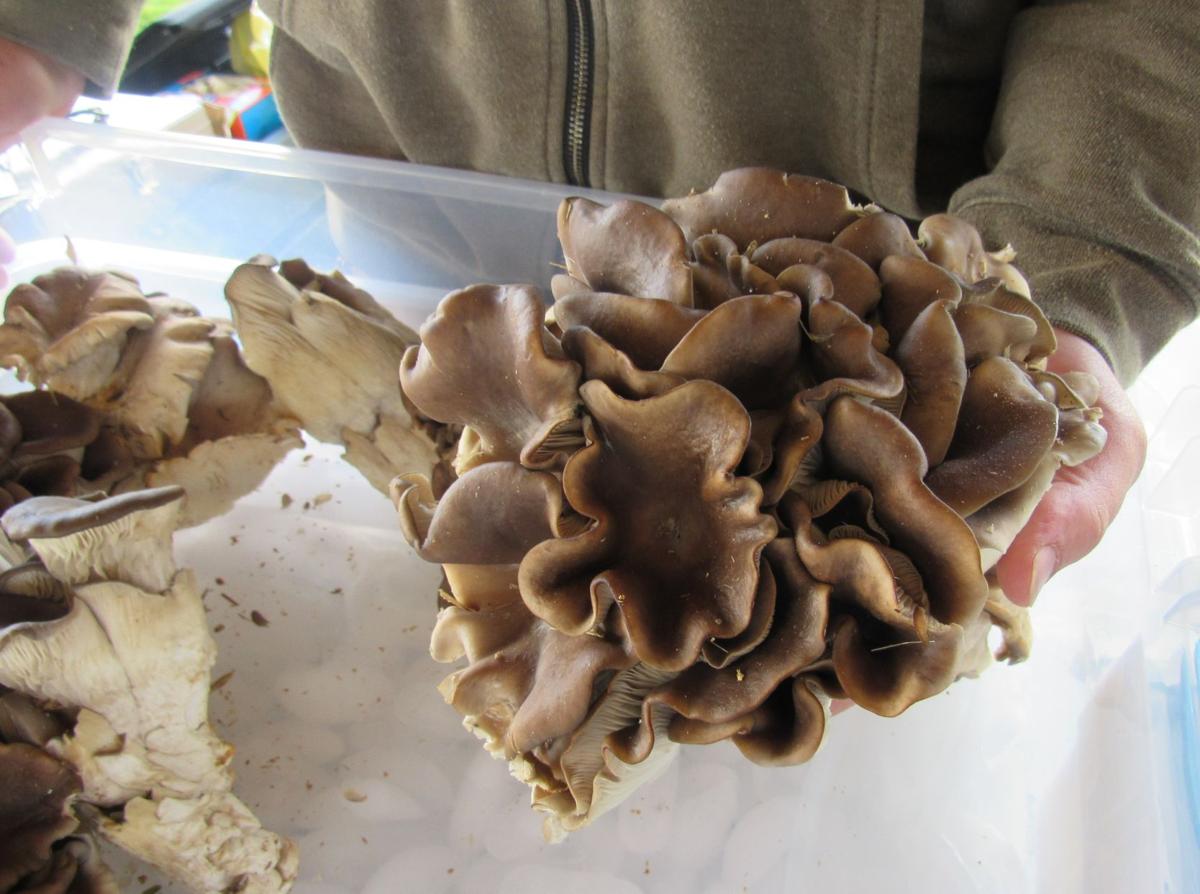 Adam Goodson gently removes the freshly grown mushrooms from the top of the bottle. Afterward, he scatters the spawn leftovers onto an outdoor field where a crop of wild mushrooms will continue to grow.

Adam Goodson gently removes the freshly grown mushrooms from the top of the bottle. Afterward, he scatters the spawn leftovers onto an outdoor field where a crop of wild mushrooms will continue to grow.

The new vendor at the Abingdon Farmers Market introduced his gourmet food item to customers at last week’s Tuesday market.

“They’re delicious and actually medicinal,” said Jane Wilson, of Abingdon, who bought a quart of oyster mushrooms. “They have a lot of health benefits. I used to grow them when I lived in Kentucky.

“When I get home,” said Wilson, “I’ll add them to a skillet with melted butter and toss them around — maybe with some scrambled eggs on the side.”

Coy Morrison, of Abingdon, was interested in looking at the funky-looking fungi at Goodson’s table. “I’ve been hearing good things about them,” he said.

Mushrooms remain a mystery to a lot of people, said the farmer.

“But you really don’t have to do a lot to them in the kitchen — they speak for themselves, flavorwise.

“Sauteing them in butter with a little salt is the best recipe,” said Goodson, who worked as a cook in Asheville, North Carolina, before moving back to his native Bristol, Virginia.

“I’ve seen chefs use them for stuffing in tenderloin. The stems of mushrooms add flavor to broths, and the caps are good in soups.”

Knowing it was a niche market, Goodson, 31, decided to open a farm that specialized in the gourmet mushrooms in 2016. His business, Pick n Grin Farms, is an all-natural, sustainable farm specializing in greenhouse and gourmet mushroom production. His goal is to established an indoor operation so he can offer the mushrooms on a regular basis.

The year before, he dabbled in farming by participating in Grow Your Own, a program of Appalachian Sustainable Development. Starting a market garden with everything from onions to beans to potatoes, Goodson sold his produce at the Bristol Farmers Market.

He added mushrooms to his inventory even though market vendors discouraged him from putting much emphasis on them.

“They were a huge hit at the Bristol Farmers Market. The first time I took them, I had people lined up for them, and I sold out within an hour. I knew how much people love mushrooms.

“But few of us have access to fresh mushrooms,” he said.

“A lot of the store-bought mushrooms actually are dried and come from commercial farms that are hours away. Mushrooms generally have short shelf life, so I do my best to deliver within a day of harvesting them.”

Creating a demand in this area, Goodson has shared his mushroom crops with local restaurants owners. Rain Restaurant & Bar and Morgan’s, both in Abingdon, use Goodson’s mushrooms in their menu items.

For the love of farming

A 2005 graduate of John Battle High School, Goodson attended Virginia Highlands Community College, where he studied horticulture and acquired a good foundation for what’s turned out to be his dream job.

After working a few years as a cook in Asheville, North Carolina, Goodson recognized a growing interest in the edible fungi used by chefs for many vegan and vegetarian meals.

Through the horticulture program at the community college, Goodson received a $10,000 grant from the National Resource Conservation Service, a branch of the U.S. Department of Agriculture, in 2016 to build two high-tunnel greenhouses on the farm. One is used as a hothouse and the other for cold-season crops.

After applying a second time, Goodson has received notice that he will be awarded another $10,000 grant during 2019, which he will use to build another large greenhouse to expand his tomato and pepper production.

Ben Casteel, program coordinator for horticulture and agriculture at Virginia Highlands Community College, explained the grant is a part of the Environmental Quality Incentives Program.

“Adam was one of my best students in class at the community college,” said Casteel. “He recognized mushroom production is in high demand but low in supply. He took some of my ideas and just ran with them. He has the drive to make it in the agriculture industry.”

In the hothouse, Goodson grows heirloom tomatoes and sweet and hot peppers. In the cold-season greenhouse, he grows fresh herbs, cucumbers, beans, potatoes and onions.

He uses a lot of farming concepts, such as vertical farming. “The greenhouses are 14 feet high, so I’m utilizing the extra space to grow things vertically. It’s better for the plants to keep them off the ground, and it’s easier for me, too.”

He also raises compost worms and honeybees on the farm.

It’s taken Goodson a few years to learn the many differences between growing mushrooms and plants.

He uses patches outdoors to grow the mushrooms naturally in the environment. He calls them his wild mushroom selection.

For growing the mushrooms indoors, Goodson converted cattle stalls into growing beds, lined with plastic to create a microclimate — the climate of a small restricted area — in each stall.

Inside the barn, he grows mushrooms of many varieties — oyster, pioppino, chestnut and lion’s mane. Outdoors, he nurtures wild oyster mushrooms, lion’s mane and a morel variety. His goal is to grow mushrooms that have particular medicinal benefits.

He’s learned a bottle method for growing mushrooms works best. Reusable plastic bottles marketed only in China help him grow uniform fruit that’s easier to harvest. Goodson packs the bottles with sawdust material and then sterilizes the bottles before adding the spawn for inoculation.

After harvesting the mushrooms in the bottle, Goodson scatters the spawn leftovers onto an outdoor field, where a crop of wild mushrooms will continue to grow.

Eventually, Goodson wants to open up the farm to tours to show people the satisfaction and rewards of farming. He’s disappointed there are few young people choosing farming as careers.

“I got funding to go to school and grants for the greenhouses. I couldn’t have done any of that on my own, so I want to do what I can to teach people that farming doesn’t have to be hard, and it can be economical if you make money at it,” Goodson said.

“I’m a big believer in all-natural, chemical-free growing. I’ve had great success with organic growing, and I want to teach people that you can do it without spending a lot of money.”

Goodson said he often helped out in the family garden as a child but never realized agriculture was something he could make a living at.

“When I was in school, I learned there is a stigma that farming doesn’t make good money. That’s not true, but there is an art to being successful at it,” he said.

“It’s not for the faint of heart, but at the same time, farming is something that renews the spirit. It’s my passion.”

Carolyn R. Wilson is a freelance writer in Glade Spring, Virginia. Contact her at news@washconews.com.

Carolyn R. Wilson is a freelance writer in Glade Spring, Virginia. Contact her at features@bristolnews.com.